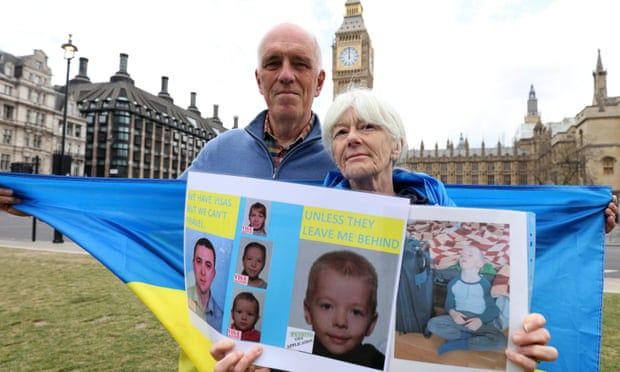 MPs presented with dossier of 986 cases where visas have been applied for but not yet granted
Almost 1,000 Ukrainian families who applied for visas under the UK government’s Homes for Ukraine scheme are still waiting for the applications to be processed more than a month after submitting them.

One would-be host, Lauren Corbishley, who has founded a protest group about the delays, said the failure to issue visas to some of those who applied at the beginning of the scheme was “torture” for the families. She called on the government to launch a public inquiry into what has gone wrong.

A group of would-be hosts protested outside parliament on Monday and met MPs including Theresa May and Steve Baker. They presented the MPs with a dossier of 986 cases where visas have been applied for but not yet granted. Of these, 866 applied in the first two weeks of the scheme, which opened on 18 March.

The government did not respond to claims from UK hosts and Ukrainian families that visa applications submitted early on in the scheme had gone astray, pointing out instead that the Home Office was now processing thousands of cases a day.

Two of the protesters at parliament, Debbie and Trevor Farnfield, helped the family they hope to sponsor apply for visas on 24 March. The family fled from Ukraine to Poland and are sleeping on mattresses in a gym outside Warsaw. The parents and two children have been granted visas but a third sibling has not, which means the whole family have been unable to travel to the UK. The Farnfields held up photos of the family at the Westminster protest.

“We wanted to help Ukrainian refugees because we have a family-size home but no longer have all of our family living in it,” Debbie Farnfield said. “We could not live with our consciences if we didn’t help out.”

They and the family they want to support are frustrated by the delays. “The visa system has become a national embarrassment,” said Trevor Farnfield.

Jo Wright, a wheelchair user, is trying to host a Ukrainian Paralympic athlete, Svitlana Tryfonova, and her two children. Wright has an accessible home and wanted a Ukrainian with a disability to be able to benefit from it.

“The family have been living in a three-storey building with no lift, so Svitlana’s sons have been carrying her up and down the stairs,” Wright said. “We booked them on to a flight to the UK today but we’re still waiting for the visas so had to cancel the flight.”

Visas for Tryfonova and her elder son have been processed but the family are still waiting for a visa for the younger son.

A group called Vigil for Visas is calling on the government to simplify the visa process, allow applications to be tracked in real time and end the delays that they say could prove deadly for people trapped in a war zone.

Corbishley’s group, Protest Over Missing Visa Applications 18-25 March 2022, is another highlighting the problems many are having with getting UK visas.

A government spokesperson said: “Thanks to the generosity of the public who have offered their homes to Ukrainians fleeing the war and through the Ukraine family scheme, more than 71,800 visas have been granted with 21,600 Ukrainians arriving safely in the UK. The Home Office is now processing thousands of visas a day – this shows the changes made to streamline the service are working and we’ll continue to build on this success so we can speed up the process even further.”
Add Comment