There have been 2,700 visas issued for refugees coming to the UK as part of Homes for Ukraine - less than 10% of the 28,300 applications made in the scheme's first 15 days.

Lord Harrington, refugees minister, admitted the forms took "too long" to fill in and said the government was trying to speed up the process.

There has been criticism of the scheme since it was launched.

Charities said the process "is just too difficult" for those fleeing Ukraine.

The quickest way to help people would be for the UK to stop requiring visas for those fleeing Ukraine - and would bring it in line with many other countries which have done so since the crisis began, said the British Red Cross.

The charity said it has had representatives at major airports and arrival hubs since 19 March - but so far only 65 people arriving from Ukraine had been helped.

Sonya Sceats, chief executive of the Freedom from Torture charity, said: "In a month where people across the country signed up to welcome more refugees than the government has in 10 years, these woeful numbers prove why visa-based schemes are an unsuitable gateway for refugees fleeing Ukraine to reach safety here in the UK."

On top of the 2,700 Homes for Ukraine visas, a further 22,800 visas from 31,200 applications have been issued under the Ukraine Family Scheme, the Home Office said. These are for those with close relatives living in the UK.

But even those with visas are not always being housed. Some refugees have been reporting themselves to councils as being homeless, the Local Government Association said.

Its chair James Jamieson said it was a "big issue". So far, 57 councils have said people had presented as homeless - 44 who were part of the family scheme and 56 from Homes from Ukraine.

Another 64 had entered through other routes, possibly travelling to Ireland and then entering the UK from there, he added.

Homes for Ukraine launched on 14 March. Its aim is to allow individuals, charities, community groups and other organisations to sponsor named refugees, housing them in their homes or buildings.

Those who do not personally know someone fleeing Ukraine have been advised to contact groups who are starting to make connections between individuals, to match them to a refugee.

The UK requires the refugees to have a visa before they enter, unlike other European countries which have waived the checks to speed things up. Those who are granted a visa under the scheme will be eligible to work, and can access state benefits and public services for three years.

Refugees with a valid Ukrainian international passport can apply online, but those without one have to go to a visa application centre - Lord Harrington said approximately 10% of applications so far are having to go to the centres.

Prime Minister Boris Johnson defended the government's "overwhelmingly generous" record on refugees, saying 1,000 visas were being processed a day and telling MPs: "There is no upper limit to the number that we can take."

It came after Lib Dem leader Ed Davey said "paperwork is being put ahead of people", with one elderly couple on the Polish border with Ukraine being told it was "just too complicated" to come to the UK.

Lord Harrington said he had tried to fill the application form in himself and it had taken nearly an hour - he said while this was from the comfort of his own home on a tablet, people were completing it on mobile phones while they were displaced.

He told the Levelling Up, Housing and Communities Committee progress was already being seen due to Home Office efforts to "streamline" the visa process and the government was looking at "every single step of the process to speed it up".

But he added: "We need to do more and will be making further improvements to bring people to the UK as quickly as possible."

Lord Harrington said in some parts of the form, there were four or five separate questions on as many pages, suggesting this could be condensed to one page.

He added: "The response of the British public has been incredible, opening their hearts and homes to the people of Ukraine, and we must do everything we can to make the most of this extraordinary generosity."

The minister said the "run rate" for applications for both schemes was anticipated to soon be 15,000 a week - by next week, or the week after - and that he anticipated the backlog would be cleared "quite quickly". 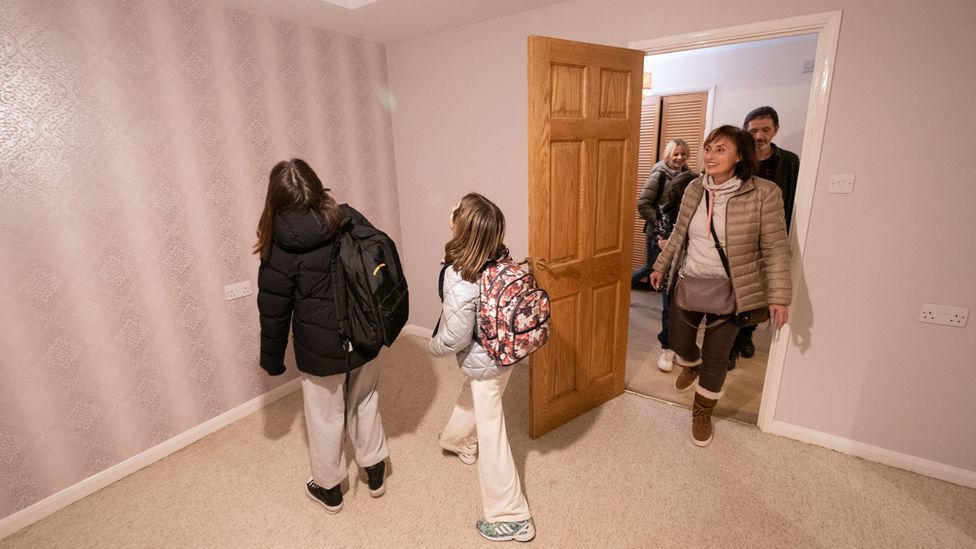 Refugees can also enter the UK if they have close relatives in the country, like this family of 10 who are now living near Cambridge

Labour is calling for the process to be expedited, with Yvette Cooper, shadow home secretary, and shadow levelling up secretary Lisa Nandy writing to their government counterparts.

They said a "shameful scale of bureaucracy" was "preventing desperately vulnerable people from reaching sanctuary in the UK", calling for clarity on the length of time taken for visas to be issued and how long security checks are taking.