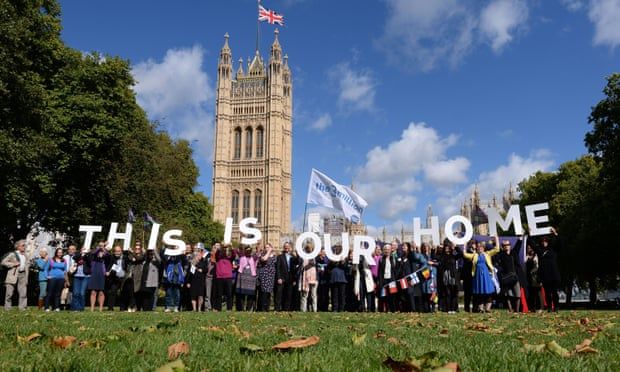 High court allows judicial review of rules that remove rights of those who do not apply for residency in time
A statutory body set up to monitor EU citizens’ rights after Brexit has been granted permission for a judicial review of Home Office rules which impact up to 2.5 million European nationals living in the UK.

The Independent Monitoring Authority (IMA) applied to the high court to challenge a Home Office decision to remove the rights of people living in the UK for less than five years before Brexit if they do not apply in time for permanent residency status.

The rules mean they would be classed as undocumented migrants and lose their rights to reside, work, rent property or access services including the NHS. At worst, they could face deportation.

The IMA argued the rules were a breach of the withdrawal agreement (WA) between the UK and the EU, which guaranteed the rights of EU citizens who were in the country before Brexit.

He added: “There is also a real issue as to the potential application of EU law in the interpretation of the WA.”

The judge said: “Resolution of these issues is a matter of public interest given the potentially large numbers of those with pre-settled status (2.4 million people). The claim should be resolved well before any such individual is exposed to potential risks of a failure to apply for settled status. That date is, I understand, the start of 2023.”

The date refers to the five-year anniversary of the pilot launch of the settled status scheme, in December 2018.

Under the Home Office rules, any of the 2.5 million people who have been granted pre-settled status who fail to apply for settled status will lose all their rights to education, healthcare, benefits and employment and access to the NHS.

“We welcome the decision of the court to allow our case to be heard. This is an important milestone as we hope to provide clarity and certainty for the millions of citizens with pre-settled status,” the IMA said in a statement.

“In the meantime, we continue to encourage citizens experiencing difficulties in exercising their rights to make us aware of this via our online portal.”

Campaigners including the3million group fear many vulnerable people with pre-settled status will fail the Home Office test and could be liable to deportation.

They include children in care, elderly, homeless people, those in hospitals or suffering domestic abuse or people who live chaotic lives and don’t manage their paperwork well.

Many others need the help of charity workers to deal with the Home Office system and may not be understand that they have to reapply once they have been in the country.

“In taking legal action now, we hope to provide clarity for those citizens with pre-settled Status of which there are 2.485 million as of 30 November 2021,” Kathryn Chamberlain, the chief executive of the IMA, said when the authority submitted its application for a judicial review.

The IMA argued successfully in its application to the high court for a judicial review that having proved their right to be in the UK already EU nationals should not have to face the risk of their rights being removed.

The Home Office said it disagrees with the IMA and will defend itself in court.

“We take our citizens’ rights obligations very seriously and, in good faith, we have put in place the arrangements agreed under the withdrawal agreement,” said a spokesman. “As this is ongoing litigation, it would be inappropriate to comment further”
Add Comment