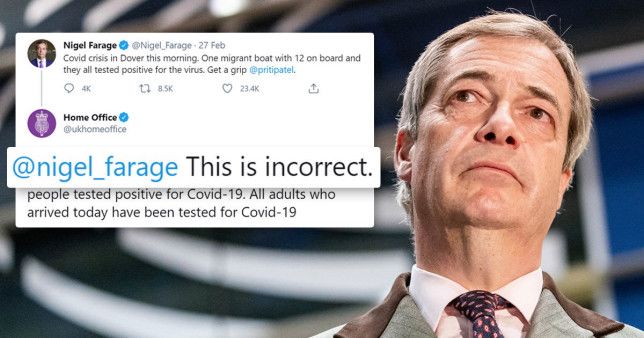 Farage told his 1.6 million followers yesterday: ‘Covid crisis in Dover this morning. One migrant boat with 12 on board and they all tested positive for the virus.’

The leader of Reform UK, formerly known as The Brexit Party, also took a swipe at Home Secretary Priti Patel in his tweet, telling her to ‘get a grip’.

But last night the Home Office hit back, tweeting Mr Farage: ‘This is incorrect. None of these 12 people tested positive for Covid-19.

‘All adults who arrived today have been tested for Covid-19.’

The 12 migrants were among a total of 87 people, including children, on four boats who made the treacherous Channel crossing yesterday.

One adult – but not in the group of 12 referred to by Mr Farage – tested positive for coronavirus, the Home Office said. 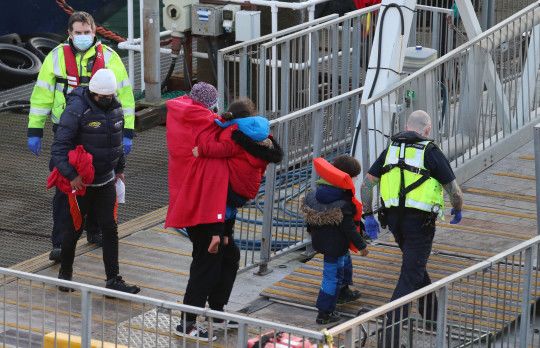 Mr Farage has yet to respond to the tweet from the Home Office.

Some social media users have urged Twitter bosses to remove Mr Farage’s tweet ‘if the information is incorrect’.

Others suggested his tweets should carry a disclaimer warning – similar to those placed on some of Donald Trump’s outbursts following his US Presidential election defeat.

But many followers continued to back the Brexiteer, with one saying: ‘I believe Nigel over the Home Office any day of the week.’

Others urged people to have more ‘compassion’ for asylum seekers and refugees making the desperate journey across the Channel. 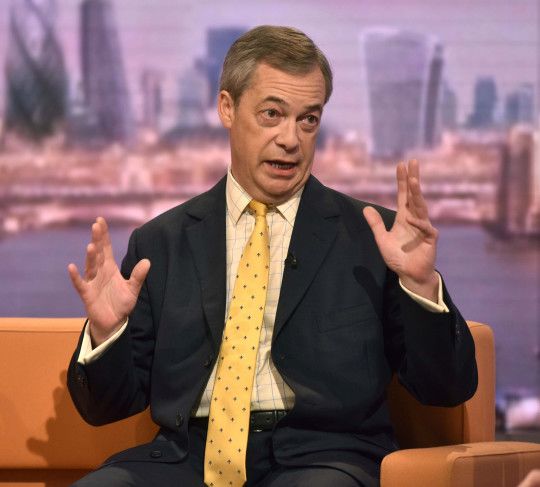 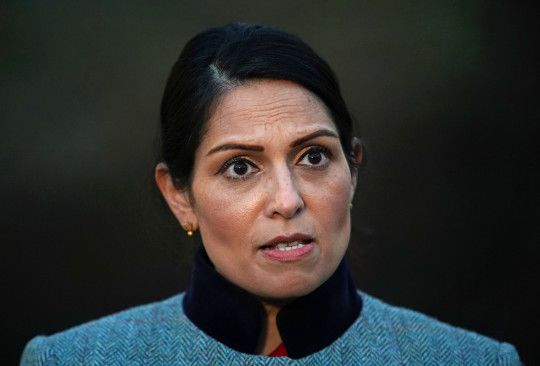 Following the incident, the Home Office said: ‘People should claim asylum in the first safe country they reach and not risk their lives making these dangerous crossings.

‘We are continuing to pursue the criminals behind these illegal crossings.

‘Police patrols on French beaches and enhanced intelligence sharing between our security and law enforcement agencies has helped to prevent crossings.

‘The Government is also returning illegal migrants who have no right to stay in the UK to safe countries.

‘In January, new rules were introduced which make asylum claims inadmissible where people have travelled through safe countries to get to the UK through illegal routes.’

It comes as concerns continue to mount over misinformation being peddled online about the coronavirus pandemic.

More than half a million misinformation videos about coronavirus have been removed by YouTube in the past year, bosses said last month.

Prince William also warned against ‘rumours and misinformation’ on social media platforms about coronavirus vaccines – as he and the Duchess of Cambridge urged people to take the jab.