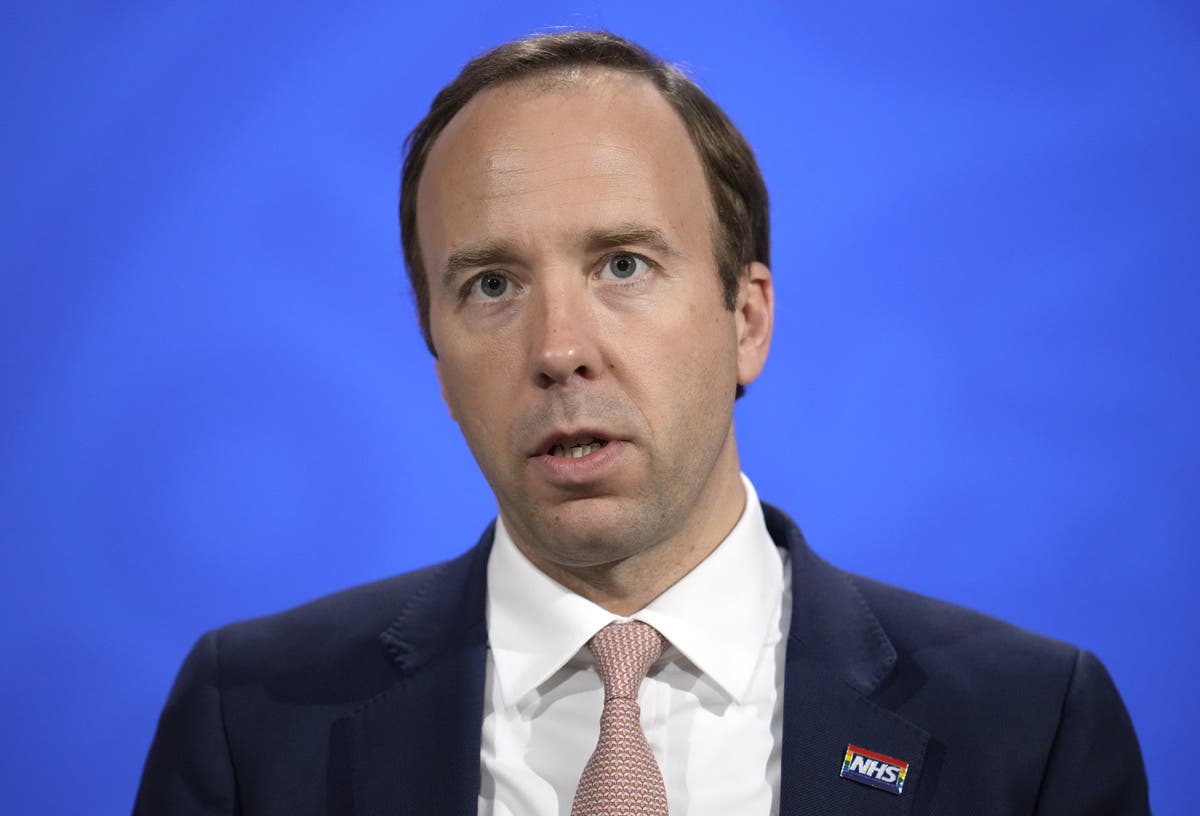 It comes as reports have suggested that plans to scrap all Covid restrictions on June 21 could be watered down.

Health Secretary Matt Hancock has defended the Government’s decision to remove Portugal from the travel green list by saying that the UK needs to be “tough” on international travel rules to protect the progress of lockdown easing.

It comes as reports have suggested the June 21 unlocking in England will be scaled down, with social distancing and the wearing of face coverings to continue, over concerns about new coronavirus variants.

Ministers have blamed fears over importing the so-called Nepal variant – a mutation that some think could have properties helping it to beat vaccines – for the decision to move Portugal to the amber list.

It means people arriving in the UK from Portugal after 4am on Tuesday will need to self-isolate at home for 10 days in a change that has left holidaymakers scrambling for pricey flights home in a bid to beat the quarantine deadline. 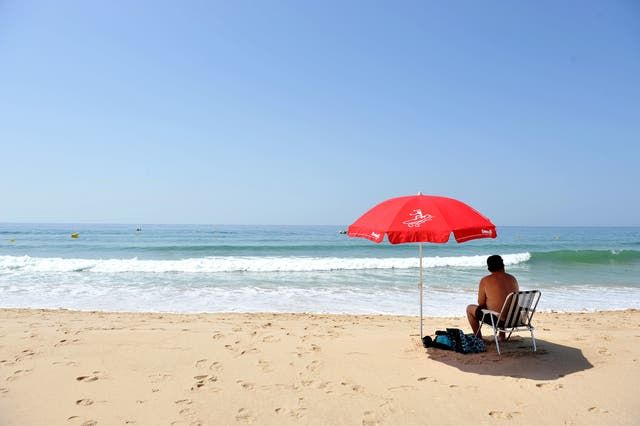 A beach in Portugal

A seat on a Ryanair flight from the capital Lisbon to Manchester on Monday costs £339, whereas travel on the same route is available for just £75 on Wednesday.

British Airways is charging £348 for flights from Faro to London Heathrow on Sunday and Monday, but the price drops to £137 on Tuesday.

The requirement for travellers to take a coronavirus test in the three days before a flight to the UK departs is also creating difficulties for people in Portugal.

But despite the hurdles facing those returning, Matt Hancock said the UK Government had been able to ease restrictions at home due to tight controls on travel rules.

His comments were made as the UK recorded its highest number of new confirmed coronavirus cases – 6,238 – since late March, according to official figures, with the Indian variant fuelling a fresh surge. 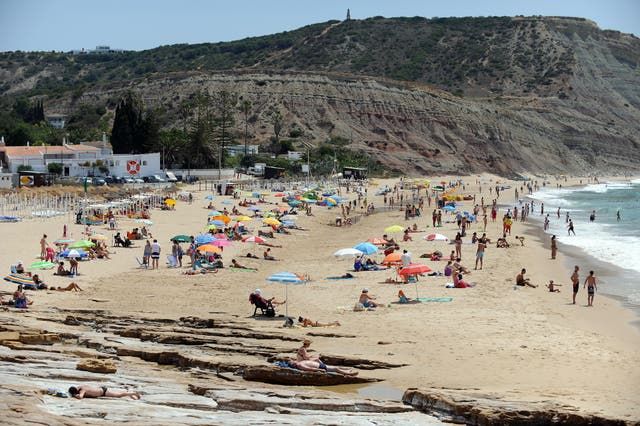 Portugal is not the only country which moved on the traffic light rating system on Thursday.

The Health Secretary, asked by reporters on Friday whether Britons were being asked to sacrifice a holiday abroad in exchange for greater freedoms at home, said: “Ultimately we are very cautious on international travel because we want to protect the success and the progress that we’ve made.

“We’ve opened up domestically and been able to do that without seeing an increase in the number of hospitalisations.

“And that is partly because we are tough on international travel.

“We have the green list there for countries where it is safe to go to but we’ve always said that we’re willing to act, to take countries off that green list if we need to.

“It doesn’t give me any pleasure that we’ve had to do that with Portugal but it is so important for protecting the vaccine rollout here at home.”

Portugal is not the only country which moved on the traffic light rating system on Thursday.

Afghanistan, Bahrain, Costa Rica, Sudan, and Trinidad and Tobago have also been placed on the red list, meaning people arriving in the UK from those nations must stay in a quarantine hotel for 11 nights. 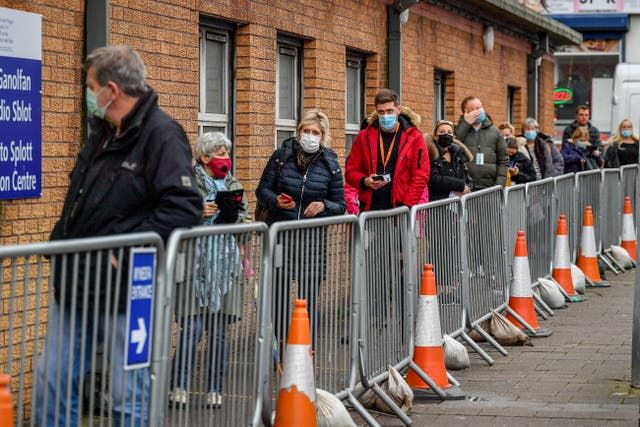 While travel remains heavily restricted, freedoms in the UK have opened up in recent weeks, with further easing planned.

In England, two households or groups of six have been permitted since May 17 to socialise indoors, while the devolved administration in Wales plans to give the go-ahead for outdoor events with up to 10,000 people sitting, or 4,000 people standing, to resume from Monday.

But a report in the i, quoting a Government source, claimed that ministers were planning to water down so-called “freedom day” in England on June 21 – the target date for when the Prime Minister hoped to scrap all restrictions.

In a move already lambasted by a hospitality chief, the newspaper said it would likely see the Government backtrack on encouraging a return to the workplace, continue with the guidance to work from home if possible, and is also likely to continue with the policy of mask wearing and social distancing on public transport.

The report also said social distancing in bars and restaurants is likely to remain, along with limits on audiences in theatres and cinemas, as the focus turns to delaying easing all restrictions until most adults have been given both vaccine jabs in efforts to guard against the Indian variant.

Welsh First Minister Mark Drakeford has confirmed, in an interview with the BBC, that he is considering keeping social-distancing restrictions in place for the rest of 2021, calling the two-metre measure “one of the strongest defences that we have” against the virus.

But Kate Nicholls, chief executive of UKHospitality, said keeping social distancing in place would threaten the viability of the sector.

“Sorry but leaving social distancing in place in pubs, restaurants, hotels and attractions means that June 21 is not freedom date at all,” she tweeted.

“It means that those businesses continue to operate at a loss and threatens the long term viability of businesses, jobs and the recovery.”

No 10 sources said the report was “speculation”, with Boris Johnson telling broadcasters this week there was still “nothing in the data at the moment that means we cannot go ahead with Step 4”.

Dr Mike Tildesley, a member of the Scientific Pandemic Influenza Group on Modelling (Spi-M) Government advisory panel, said the scrapping of all restrictions this month could be in jeopardy if ministers become “concerned” about rising hospital admissions and deaths as a result of the Indian variant.

Analysis by the PA news agency shows the majority of major hospital trusts in England are currently continuing to average no Covid-19 admissions despite rising case numbers.