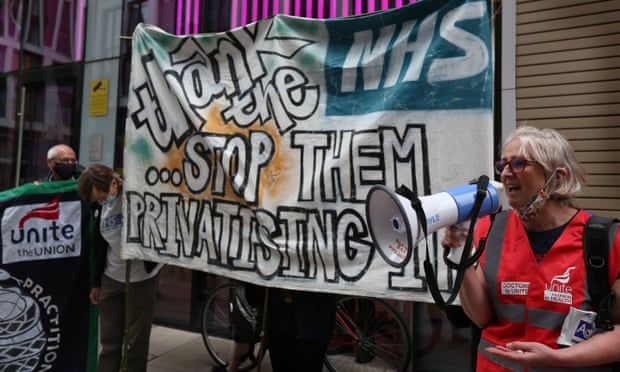 Campaigners warn new health and care bill could cause a repeat of PPE contracts scandal and lead to an unregulated healthcare market
Private companies could be handed NHS contracts for treating patients without going through a tender process as a result of the government’s shakeup of the NHS, critics claim.

The Labour party, doctors’ leaders and anti-privatisation campaigners warned that the new health and care bill would allow NHS bodies to simply award contracts for clinical care to private healthcare providers without considering other bids.

The bill, which was laid before parliament on Tuesday, sparked fears that it could see repeats of the “Tory cronies” contracts scandal involving multi-billion-pound deals for personal protective equipment during the pandemic replicated in the awarding of contracts covering the care of NHS patients.

The Department of Health and Social Care (DHSC) said that the bill included plans for “a new procurement regime for the NHS and public health procurement, informed by public consultation, to reduce bureaucracy on commissioners and providers alike, and reduce the need for competitive tendering where it adds limited or no value”. The DHSC added that the plan came from the NHS itself, saying: “The NHS has told us they were wasting precious resources on tendering processes.”

Ministers would not try to influence who gets contracts, the DHSC pledged. “Nothing in the proposed regime will give ministers any say in decisions of the NHS about when to run procurements or who to award contracts to,” it insisted.

Jonathan Ashworth, Labour’s shadow health secretary, said that “after a year when billions in taxpayers’ money has been handed out to Tory cronies for duff PPE and testing contracts, allowing further privatisation with no oversight will be resisted strongly by Labour”.

However, the bill also seeks to roll back privatisation by scrapping section 75 of the Health and Social Care Act 2012, which initiated the last reorganisation of the NHS. That clause provoked criticism because it compelled NHS clinical commissioning groups (CCGs) to put out to tender any contracts worth more than £650,000 a year.

The campaign group Keep Our NHS Public warned that while “the bill has been promoted as an end to privatisation, campaigners believe it’s actually a transition to an unregulated market in healthcare”.

NHS Providers and the NHS Confederation, which represent trusts, welcomed the bill’s drive to ensure much more collaboration between providers of different sorts of healthcare and social care. The DHSC said that replacing CCGs with ICSs would help ensure “world-class care” and help the NHS tackle the big backlog of care it is facing, which the Covid pandemic has exacerbated.

But both bodies voiced alarm over the bill handing the health secretary greater “powers of direction” over NHS England, which Richard Murray, chief executive of the King’s Fund, said would lead to “greater ministerial interference in the day-to-day running of the NHS”.

Nigel Edwards, his counterpart at the Nuffield Trust thinktank, said that giving health ministers more power “may lead to worse decisions, and they will come to regret it”. Letting ministers decide which A&E or maternity units stay open or are closed “risks gridlock” on such issues.

He added that allowing the health secretary to appoint the chair of ICS boards could lead to “political figures being put in charge, [and] some might push local services to achieve political goals for whichever party is in power, instead of quietly serving the interests of patients”.

Matthew Taylor, the NHS Confederation’s chief executive, said the extra powers also carry with them “the risk that [NHS] arm’s-length bodies, including NHS England and NHS Improvement, could be split up or abolished without any real scrutiny”.

The bill is due to have its second reading in parliament next week.
#Covid
Add Comment