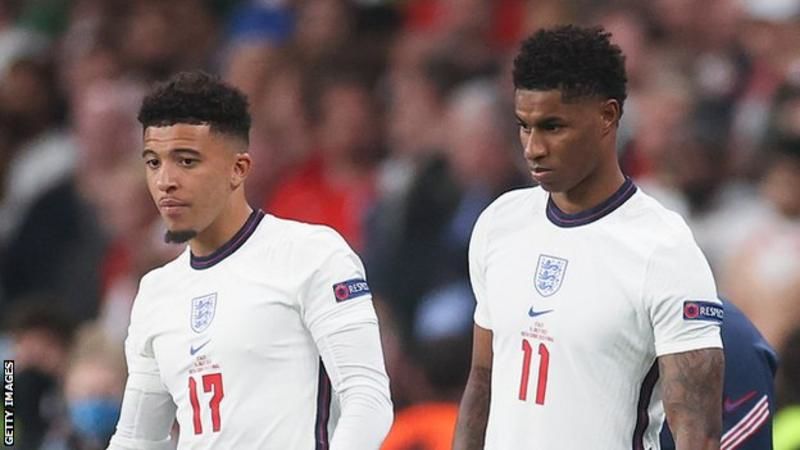 Sancho, 21, Marcus Rashford, 23, and Bukayo Saka, 19, were targeted on social media after all three missed penalties in the 3-2 shootout loss.

"And hold these people accountable."

So far four people have been arrested as the UK Football Policing Unit is trawling through thousands of social media posts aimed at the three black players.

In his first social media post since the defeat, Borussia Dortmund's Sancho said "sadly it's nothing new" to see the racist abuse he, Rashford and Saka received.

"To all the young people who have received similar abuse, hold your heads up high and keep chasing the dream," he added.

"I am proud of this England team.

"I want to say a massive thank you for all the positive messages and love and support that far outweighed the negative.

"It's been an honour as always representing England and wearing the Three Lions shirt, and I have no doubt we'll be back even stronger."

Sancho said he was "sorry" to his team-mates, coaching staff and the fans who he felt he had "let down" by missing England's fourth penalty.

"This is by far the worst feeling I've felt in my career," he added.

"There were so many positives to take away from this tournament though the defeat will hurt for a long time.

"I was ready and confident to take [the penalty], these are the moments you dream of as a kid, it is why I play football.

"These are the pressured situations you want to be under as a footballer. I've scored penalties before at club level, I've practiced them countless times for both club and country so I picked my corner but it just wasn't meant to be this time."

Rashford also apologised for his penalty miss but said he "will never apologise for who I am".

A mural in his hometown of Withington was defaced after his penalty miss, before it was covered in messages of support and repaired.

Rashford said he was "overwhelmed" by the response, with hundreds of people also gathering for an anti-racism demonstration at the mural on Tuesday.

But Labour leader Sir Keir Starmer said the PM's words rang "hollow", as he had refused condemn fans who booed players for taking the knee.

Southgate said the racist abuse was "unforgivable", while England captain Harry Kane told those who sent it, "you're not an England fan and we don't want you".

Patel said she was "disgusted" by the online abuse directed at the players while Johnson also defended her, saying she had "faced racism and prejudice all her career of a kind that he [Mings] can never imagine".

Sancho added that the tournament had been "one of the most enjoyable camps I've been part of in my career so far, the togetherness of the team has been unmatched, a real family on and off the pitch".

The former Manchester City youth player has had a medical at Manchester United and is set to complete his £73m move from Dortmund soon.

Rashford may not play for United until the end of October after deciding to have surgery on a shoulder injury.