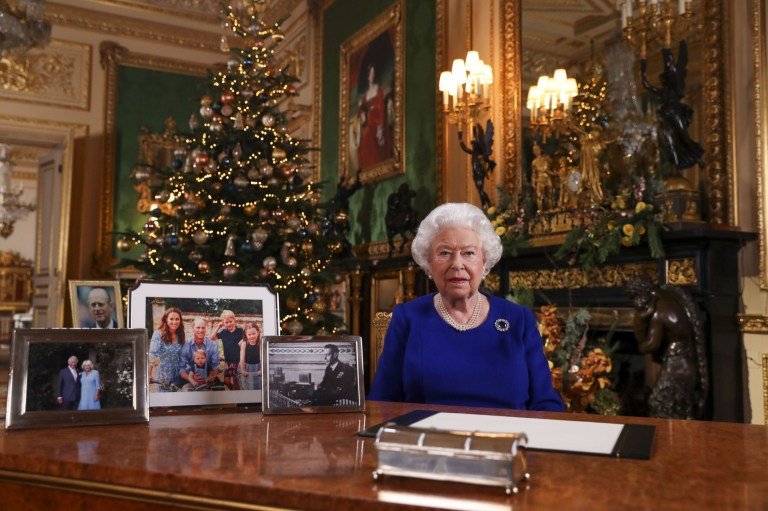 Prince Harry and Meghan Markle have released a new picture with their baby son Archie in a festive Christmas card.

The Royal couple have opted for an eco-friendly e-card this Christmas following criticism over their carbon footprint earlier this year.

Captured in black and white, the festive image shows Harry and Meghan sitting by a Christmas tree smiling as the seven-month-old gazes into the camera in the foreground.

The card was not officially released through any official royal channels, and first appeared on an unverified Twitter account for The Queen’s Commonwealth Trust.

Shared as a gif, with the lights on the tree twinkling, the account said: ‘Just sharing the sweetest Christmas Card from our President and Vice-President, The Duke and Duchess of Sussex.

It is understood that copies of the image, taken by the couple’s friend Janina Gavankar, were emailed to friends and staff on Monday and hard copies sent to family.

A spokeswoman for the Sussexes later confirmed its authenticity.

Just sharing the sweetest Christmas Card from our President and Vice-President, The Duke and Duchess of Sussex. Very Merry Christmas, everyone! pic.twitter.com/McOcHALoGl

Harry and Meghan are currently spending a six-week break over the festive period in Canada.

The duchess, a former actress, lived and worked in Toronto during her time starring in the popular US drama Suits, and the couple were famously pictured together when Meghan joined her then-boyfriend Harry at the 2017 Invictus Games in the Canadian city.

The Sussexes are likely to have spent the US Thanksgiving celebrations, which this year fell on November 28, with the duchess’ mother Gloria Ragland.

It has already been announced they will not be joining the Queen and other members of the Royal Family at Sandringham on Christmas Day, as they are taking a break.

The Queen is said to be supportive of the Sussexes’ plans and it follows the Duke and Duchess of Cambridge’s past decision to spend Christmas with Kate’s parents and not with the Queen.

However eagle-eyed viewers noticed that Harry and Meghan’s picture was noticeably missing from a table during the Queen’s Speech, in stills that were released this morning.

The couple missed the Queen’s pre-Christmas lunch at Buckingham Palace and will not be present for the traditional royal family gathering on Christmas Day.

This will be the second time Prince Harry has missed spending December 25 with his immediate family, the first being when he was on a tour of Afghanistan while in the Army in 2012.

The 93-year-old monarch will comment in her speech on ‘how small steps taken in faith and in hope can overcome long-held differences and deep-seated divisions to bring harmony and understanding’.

She is expected to reflect on a ‘bumpy year’ which has seen problems within the royal family surface, including allegations made against Prince Andrew by a victim of sex offender Jeffrey Epstein.

Also in 2019 the Duke of Edinburgh, Prince Philip, was involved in a dramatic car accident, while Prince Harry and Meghan Markle spoke about their struggles living in the public eye.

The Monarch’s speech will be broadcast at 3pm on Christmas Day.