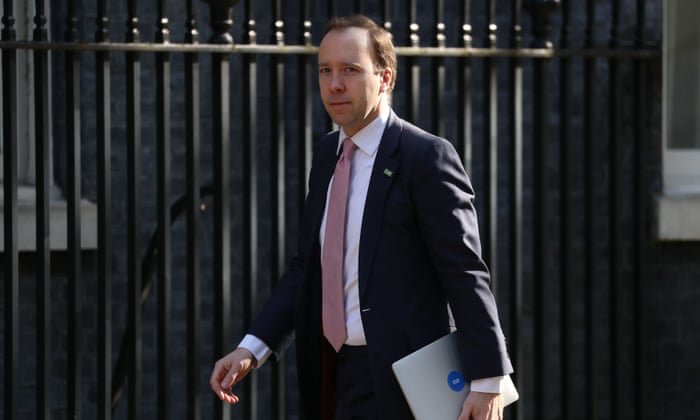 Hancock's department 'warned No 10' not to publicise PPE shipment

Department of Health ‘strongly advised’ Robert Jenrick not to make promise but was overruled, sources say
Downing Street ignored a firm warning from Matt Hancock’s Department of Health that ministers should not publicise the expected shipment of protective kit for NHS staff from Turkey in case it backfired.

In a sign of deepening tensions between the Department of Health and Downing Street, the source said that Hancock’s Cabinet colleague Robert Jenrick was “strongly advised” not to mention the consignment at the government’s coronavirus media briefing last Saturday.

Instead, the housing, communities and local government secretary – with No 10’s approval – went ahead and promised that it would arrive the next day and contain 83 tonnes of personal protective equipment (PPE), including 400,000 of the full-length surgical gowns that are in critically short supply in the NHS. Its non-arrival on Sunday led hospital bosses to go public for the first time with their “intense frustration and exasperation” with ministers over botched deliveries of PPE.

The disclosures – strongly denied by a source close to Hancock who called them “categorically not true and a fabrication” - come amid what appear to be growing difficulties at the heart of government over who is to blame for the difficulties Boris Johnson’s administration is facing over its handling of the Coronavirus crisis, especially the lack of both testing and PPE for NHS staff.

Hancock was subject to a public attack in a front-page story in Tuesday’s Daily Telegraph, quoting government insiders, over his struggle to deliver the 100,000 tests for Coronavirus a day by the end of the month that he promised in early April.

An unnamed person referred to as an insider who is close to Downing Street aides was quoted as calling the target “arbitrary”, and adding: “There is a faint irrationality behind it, just because there was a clamour for mass testing. Hancock’s 100,000 target was a response to a criticism in the media and he decided to crank out tests regardless.

“He’s not had a good crisis. The prime minister will say he has confidence in him but it doesn’t feel like that. He set out to buy time by setting this target and it threatens to come back to bite him. The 100,000 figure was Hancock’s idea, but he made that figure up.”

On Wednesday, the DHSC source said that Downing Street had been urged not to refer to the cargo before Saturday’s briefing. “We strongly advised Robert Jenrick against doing this [mentioning the Turkey shipment at the government press conference last Saturday] but he and No 10 overruled us,” the source said.

“The advice we gave as a department was that we shouldn’t mention individual orders of PPE. But for whatever reason it wasn’t followed.”

But another cabinet source said it was not right to say “it was just Matt that was warning about this”.

“Lots of people were clear that we shouldn’t be talking about any shipments before they’ve arrived. Everyone in government is normally wary of this and I don’t know why it didn’t happen this time,” he said.

The government has faced severe criticism this week over its handling of deliveries of foreign-sourced PPE to the UK. The promised arrival of 400,000 gowns urgently needed by frontline staff turning into a saga which dragged on into Wednesday, when one of three RAF planes that had been scheduled to bring the shipment back finally touched down in the UK.

The plane had been dispatched from RAF Brize Norton in Oxfordshire, where two other aircraft have been on standby to pick up further supplies from Turkey since late on 20 April.

The Department of Health and Social Care was blamed for failing to secure the necessary export approvals from Turkey after placing the order, but health sources said on 22 April that there were other reasons for the delay.

The planes remain on standby at RAF Brize Norton and may fly to Istanbul imminently if there is enough equipment waiting to make the journey worthwhile. “We’ve been told there is another delivery at the airport now, but we are not yet sure if there’s enough to justify a flight,” a defence source said.

There have been repeated ministerial assurances that the cargo would imminently arrive in the UK since Saturday when Jenrick first referred to it. His initial announcement was made even though necessary clearances had not been sought.

On Sunday, Gavin Williamson, the education secretary, said he hoped the shipment would arrive the next day. That promise was tentatively repeated by Oliver Dowden, the culture secretary, on Monday morning after NHS leaders intervened. “I don’t want to start making more and more promises, but I understand that flight will take off this afternoon and those [gowns] will be delivered,” Dowden said.

On Tuesday, the government finally adopted a more cautious tone. Simon Clarke, the local government minister, said the consignment would be in the UK “in the next few days”.

“The advice that we gave as a department was that we shouldn’t mention individual orders of PPE [because] supply chains are extremely unreliable. When orders fall through or are delayed, for whatever reason, it’s not good for anyone. Nobody in the NHS appreciates being told that we have got X tonnes of PPE turning up but it then not arriving.”

The source added that Hancock has made clear to No 10 and other government departments that: “We shouldn’t be making promises that can’t be delivered on an exact date when we don’t know what will arrive or when. We’re just trying to exercise caution in the way we talk about supplies.”

In the wake of last Sunday’s non-arrival from Turkey, NHS Providers and the NHS Confederation, which both represent hospital trusts in England, made clear that they wanted ministers to stop talking about PPE orders until they actually arrived and had been checked to ensure that they contain what had been ordered.
Add Comment