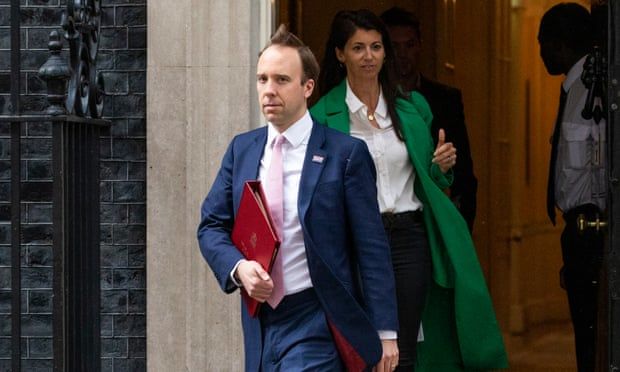 Sir Keir Starmer queries award of Covid contracts, issuance of aide’s parliamentary pass and leak of CCTV
Boris Johnson still has “huge questions to answer” in the aftermath of Matt Hancock’s resignation over his affair with a friend and paid adviser, Labour has said, as the government was urged to launch an investigation into a “potential abuse of public money”.

Downing Street was struggling to contain the scandal, which broke last week after CCTV footage emerged of the married health secretary and Gina Coladangelo kissing in his Whitehall office only weeks before.

Pressure is still building as Tory MPs are among those demanding reassurances there was no wrongdoing over Coladangelo’s appointment to a role paying up to £15,000 a year as a nonexecutive director at the Department of Health and Social Care (DHSC). She started in September 2020 and stepped down from her post over the weekend.

He said the government should come clean on how Covid contracts were awarded, why Coladangelo was given a parliamentary pass by another health minister and about how the CCTV images that led to Hancock’s downfall was leaked.

Caroline Slocock, who founded the Civil Exchange thinktank and was private secretary to Margaret Thatcher, told the Guardian she had “quite significant concerns” that the focus on Hancock’s breach of Covid rules had “let him off the hook” for “potentially an abuse of public money”.

She claimed there had been a “murky series of events” and that, given Coladangelo worked as a communications director, “it’s quite hard to see” how she was qualified to advise DHSC on its central policy areas of health and social care.

Slocock said Hancock had “at best, essentially appointed an old chum”, and added: “To get your mistress to be marking your homework is not acceptable.”

A Tory MP and former minister also said there were “more questions” that needed answering, including about Hancock reportedly relying heavily on a personal email account to conduct government business, taking Coladangelo to the G7 and the “apparent favouring” of family and friends for Covid contracts. “It’s very serious,” they said. “None of this has been clarified.”

Another said the answers to the lingering questions “will probably influence” whether Hancock ever returns to the frontbench, while a third admitted the former health secretary had “few fans” in his own party.

Labour has also written to the cabinet secretary and information commissioner over the claims about Hancock’s personal email use.

Angela Rayner, the party’s deputy leader, said “the buck doesn’t stop with Hancock and this matter is not closed”.

She added: “This government is rotten to its core. We need to know how wide this goes and how much government business is being conducted in secret.”

Sir Ed Davey, leader of the Liberal Democrats, challenged Javid to “abolish Conservative cronyism” at the DHSC, starting by ruling that Tory peer Dido Harding will not be made the next chief executive of NHS England.

“The public expects so much better from the government during a pandemic,” he added.

Javid will be tested when he addresses the Commons with a statement on Monday afternoon, expected to confirm England’s final stage of lockdown easing will not go ahead on 5 July – the midway review point promised by the government when it announced the four-week delay expected to end on 19 July.

It will be the former chancellor’s first performance at the dispatch box since he quit in a row with Johnson and Dominic Cummings in February 2020.

Tory MPs loyal to Hancock rallied around him by attacking the installation of CCTV in his Whitehall office, which captured images – leaked to the Sun newspaper last week – of him and Coladangelo kissing while stricter social distancing rules were still in place.

One said the video monitoring was “utterly unacceptable” while a second said malicious people had bugged the health secretary’s office and were snooping on him.

Brandon Lewis, the Northern Ireland secretary, said it is “something we need to get to the bottom of” because a lot of what goes on in government departments is “sensitive and important”.

But another senior Conservative said the row over the cameras, which has prompted an internal Whitehall investigation, was a “distraction” from the “absolute car crash” of Hancock’s career.

The scandal has also prompted renewed speculation about a cabinet reshuffle. Johnson avoided a mass switch of his top team by appointing Javid and not moving any other ministers.

But some insiders think that, given Hancock was likely to be demoted anyway, his departure has increased the chances of a reshuffle just before parliament’s summer recess begins on 22 July.

Gavin Williamson, the education secretary, is one of those said to be most at risk, and several Tory MPs want to see Hancock’s ally, health minister Lord Bethell, moved on too.

“We need a reshuffle and we need it soon,” a senior Conservative said. “Most ministers are looking slightly beyond what they are doing and awaiting it – they don’t have their full focus on the jobs.”

A DHSC spokesperson said all ministers “only conduct government business through their departmental email addresses”.