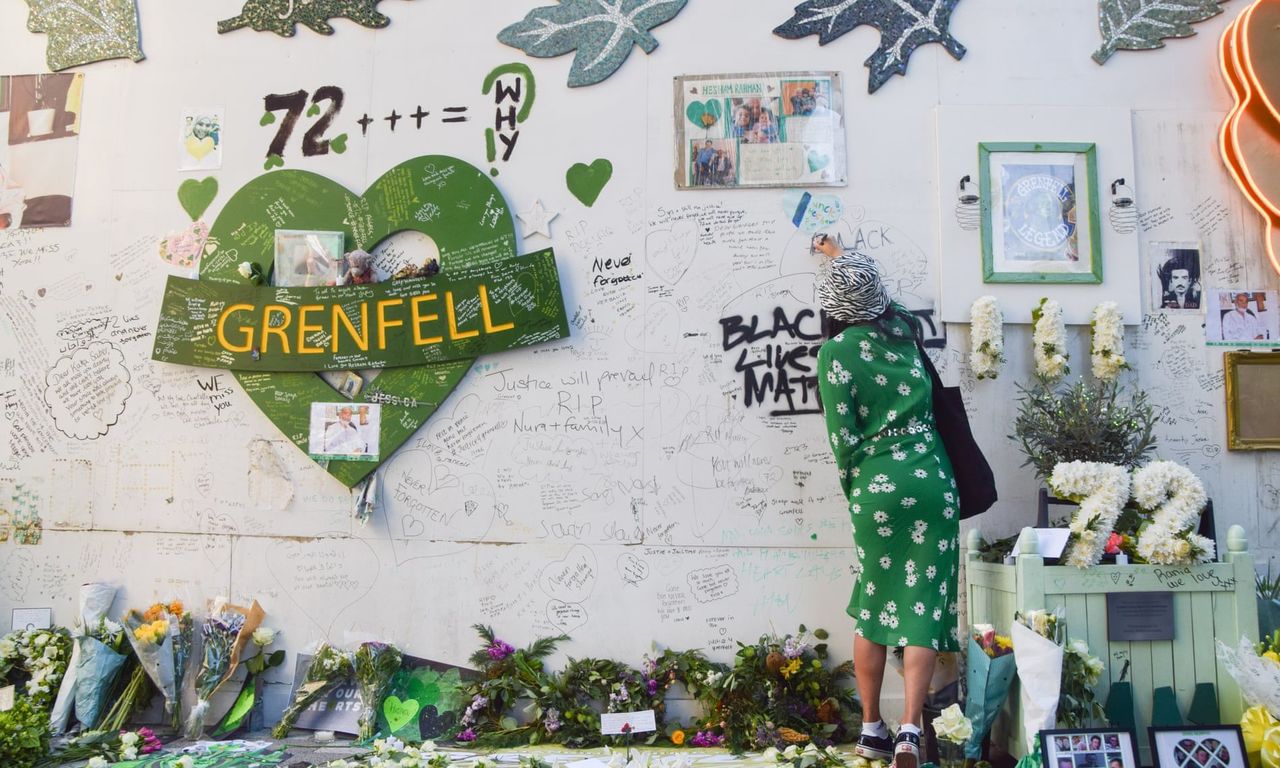 The final evidence sessions have heard unflinching accounts of how victims died, panicking and desperate in horrific conditions

The public inquiry into the Grenfell Tower disaster is ending as it began: with a shocking reminder of the human cost. It opened in May 2018 with elegies to the 72 victims. Its final evidence sessions have been unflinching accounts of the violence of their final moments.

The hearings sought to satisfy the fact-finding requirements of the coroner but swung the spotlight of an often highly technical inquiry back to the sheer barbarity wrought upon a community that still awaits justice.

Trapped, choking, panicking and desperate, most died from the “inhalation of fire fumes”, forensic experts concluded, as combustible cladding, made by companies that knew the dangers, blazed.

Most died on the highest floors in horrific conditions. A large group huddled from the smoke in flat 201 on the top floor, the one-bedroom home of Raymond “Moses” Bernard, 63, a member of the Windrush generation from Trinidad, and his dog Marley. Debbie Lamprell, 45, who worked at Opera Holland Park, was among downstairs neighbours forced upwards by the thick smoke. There was football-mad Biruk Haftom, 12, his mother, Berkti Haftom, 29, who had fled the civil war in Eritrea, and Hamid Kani, 61, an Iranian actor who came to Britain in the 1970s.

Biruk and his mother died near to each other. She was three months pregnant. Also there were Sudan-born Amal Ahmedin, 35, her three-year-old daughter, Amaya Tuccu Ahmedin, and cousin Amna Idris, 27. Dozens of people escaped by going down through the smoke but Amal and her family were among those urged to go back. Amal and Amaya collapsed just outside the flat. Lamprell’s remains were found close to those of Bernard and Idris. 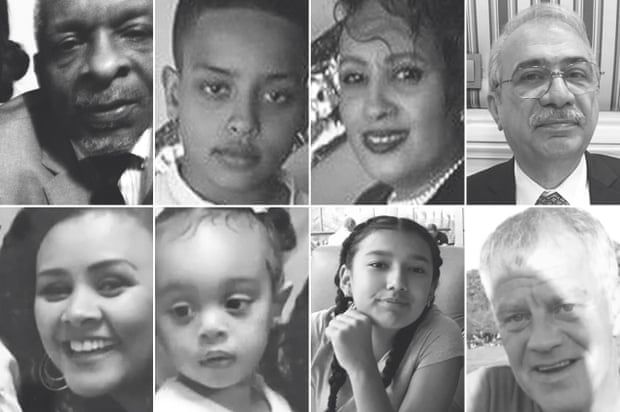 Joining them was 12-year-old Jessica Urbano Ramirez, from flat 176 on the 20th floor. Her mother and sister were out when the fire began and she went upwards, possibly following adults believing they couldn’t make it out by the stairs. Firefighters struggled up to Jessica’s flat but she had already gone. Her remains were found in Bernard’s bedroom.

Lamprell had been with her friend Gary Maunders, 57, but they became separated. He sheltered in flat 203 with Rania Ibrahim, an Egyptian, and her daughters Fethia, four, and Hania, three. Fathia Ali Ahmed Elsanousi, 77, a retired school teacher originally from Sudan, and her son Abufras Mohamed Ibrahim, 39, and daughter Isra Ibrahim, 33, were there.

Rania broadcast a video stream on Facebook which revealed the smoky chaos of the lobbies that deterred escape attempts.

“The whole building is burning and we’re on the top floor,” she could be heard saying. At 2.42am, long after the inquiry has found the “stay put” strategy should have been reversed, a fire brigade call handler said: “The safest place for you at the moment is in the flat.” Remains suggested the adult women had made a cordon around the children. 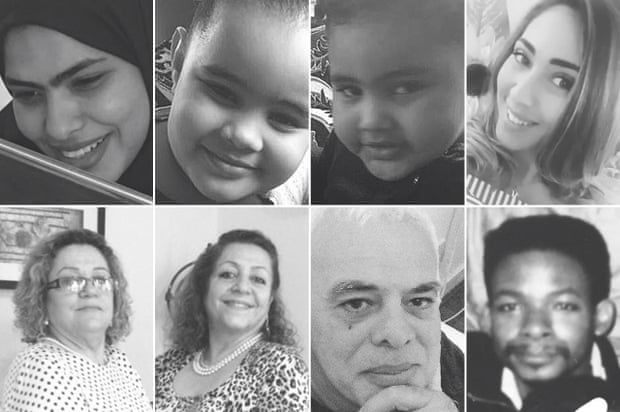 Gasping for air, residents moved close to the windows. Abufras fell from the tower at 3.50am, hitting the building entrance canopy. Paulos Tekle, the father of Issac Paulos, five, considered jumping with his son to stop him burning. He reasoned his body might cushion Issac’s fall. The family escaped the flat, but Issac got lost on the way down and died. Mohammed Neda, 57, a driver from Kabul, did fall to his death from his top-floor flat, where he had chosen to stay with a group of women stranded because two of them – Eslah Elgwahry, 64, and Sakina Afrasehabi, 65 – were disabled. Eslah’s daughter, Mariem Elgwahry, 27, and Sakina’s younger sister, Fatemeh Afrasiabi, 59, were there too. They all died.

Hesham Rahman, 57, in flat 204 was another of the 15 disabled residents who died. Many had told the council about their immobility and needed lower-floor flats. Marjorie Vital, 68, born in Dominica, and her son Ernie Vital, 50, took shelter in the top-floor home of Gloria Trevisan, 26, and Marco Gottardi, 27, Italian architects. At 1.34am Trevisan called her mother in Italy and said thick, black smoke was filling the lobby.

“I can’t get out,” she said on a call. “I don’t believe it’s ending like this. I don’t want to believe it. I can’t see anything outside. My eyes are burning. I can’t breathe.” Trevisan’s gold heart pendant was recovered from her remains found beside Gottardi and returned to her family. 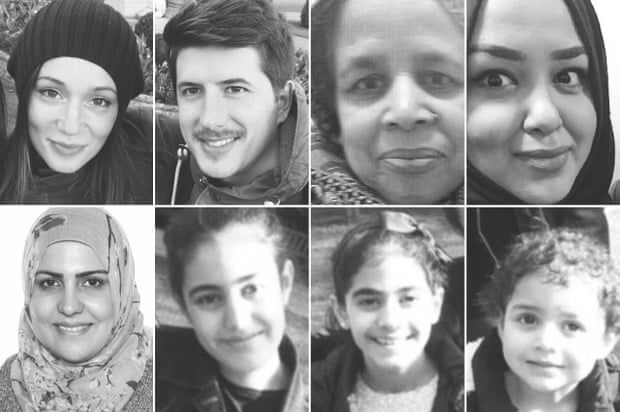 Kamru Miah, 79, was in ill health, so his upper floor flat wasn’t ideal. He lived with his wife, Rabeya Begum, 64, from Bangladesh and their children Mohammed Hamid, 28, Mohammed Hanif, 26, and Husna Begum, 22. A 999 operator told the family: “There’s someone coming up to help you.” But as fire entered the pitch-black flat, no one came. Kamru recited from the Qur’an. Husna telephoned her brother Hakim. “Please forgive me if I’ve ever hurt you,” she told him, “but I don’t think we’re going to make it.” On the 11th floor, Abdeslam Sebbar, 77, who walked with a stick, died in his bathroom.

The El-Wahabi family – Abdulaziz, 52, a hospital porter, his wife, Faouzia, 42, and children Yasin, 20, Nur Huda, 15, and Mehdi, eight – were urged by a 999 operator to take refuge in a bedroom as fire broke through the living room and kitchen in their 21st-floor flat.

In one of several calls to 999, Abdulaziz said: “I could have got out a long time ago but they said stay in the flat, stay in the flat. We didn’t leave.” No firefighters got to the 21st floor to knock on doors. The family died lying close together in a bedroom.

A police helicopter circled the tower giving false hope of rescue to people including Nadia Choucair, 34, one of six members of the Choucair family who died in flat 193 on the 22nd floor. “Can the helicopter take us, please?” she implored in a 999 call at 2.37am as the smoke became too much. An operator told her husband, Bassem Choukair, 40, there was no helicopter and to leave. They tried but couldn’t. They died with their children Mierna, 13, Fatima, 11, and Zainab, three, and Nadia’s mother, Sirria Choucair, 60.

Also deceased in the flat were neighbours Hashim Kedir, 44, a black-cab driver, his wife, Nura Jemal, 35, both born in Ethiopia, and their three children Yahya Hashim, 13, Firdaws Hashim, 12, and Yaqub Hashim, six and a “pure ball of energy”. In a neighbouring flat was Tony Disson, 65, born in north Kensington and described as “old school”. He had mobility issues and watched the plastic window surrounds melting as fire encircled his flat. He told his son Alfie “they’re not coming”, so he tried to get out. His body was recovered in the 18th-floor stairwell. No rescuers were deployed to floor 22 until after 3.03am. 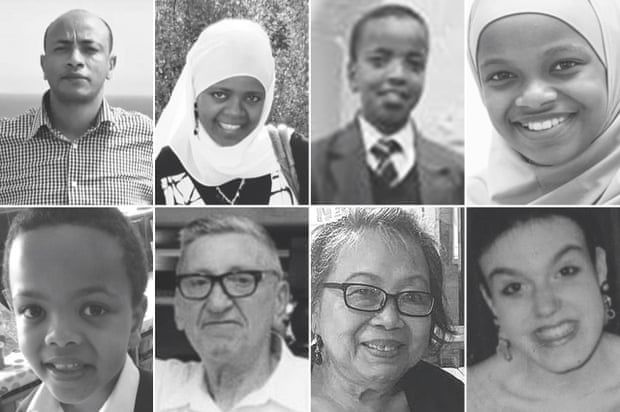 Some people left little trace in their last moments. Ligaya Moore, 78, a widow born in the Philippines, didn’t make any emergency calls and didn’t answer the phone to friends. She had hoarded such “a mountain” of possessions that it was hard for her even to get out of bed. It is possible she slept through the whole disaster. Vicky King, 71, and her daughter Alexandra Atala, 40, were considered by neighbours “reclusive and housebound”. Their flat was “nearly bare”. Vincent Chiejina, a 60-year-old with schizophrenia, made no calls and died in his living room.

There were many desperate escape attempts on the hellish, smoke-clogged stairs. Khadija Saye, 24, a talented artist whose work was exhibited at the Venice Biennale, made it from the 20th to the 10th floor, where her body was found. Her mother, Mary Mendy, 54, got as far as the 13th before her journey ended.

Firefighters tried to lead to safety Farah Hamdan, 31, her husband, Omar Belkadi, 32, their daughter Malak Belkadi, eight, another daughter, six, and baby Leena Belkadi. Two of them took turns carrying the six-year-old down through the chaos and darkness and got her out alive. Omar collapsed almost immediately on the stairs. His body was found alongside his wife and baby. Malak died in hospital.

Andreia Perestrelo was seven months pregnant and had to escape the 21st floor with her husband and daughters over bodies in the stairway, some dead. “Someone grabbed my foot,” Perestrelo said. The family escaped but their child Logan Gomes was delivered stillborn.

Then there was the lift, which had not been updated to firefighting standards. Firefighters had tried but failed to take control of it. Khadija Khalloufi, 52, got into the lift with several others when she was separated from her husband while trying to escape. But it stopped unexpectedly on the 10th floor and filled with toxic smoke. Khalloufi was found dead by firefighters on the 10th floor alongside fellow passengers Ali Yawar Jafari, 81 and Mohamednur Tuccu, 44.

On floor 16, Joseph Daniels, 69, was with his son Sam. He had dementia and diabetes and couldn’t manage stairs, and when the time came to flee he was frozen to the spot. Sam ran down for help, but firefighters could not rescue him. An 84-year-old woman, named only as Sheila in proceedings, died in bed in her 16th-floor flat. Steve Power, 63, a retired driver and DJ who had emphysema, tried but failed to escape with his daughter Rebecca.

The accounts led Richard Millett QC, counsel to the inquiry, to remark on the “vast distances between the final terrible experiences of those who died” and the jargon-heavy construction industry technicalities that have been argued over in much of the inquiry.

That distance, he said, “tells us how so many actions and omissions of so many people working in offices and on their smartphones … discharging endless strings of emails have consequences perhaps far remote from their consciousness but which were always objectively present in the perpetually contingent.”

On the final day, the inquiry heard how Mohammad Alhajali, 23, a Syrian civil engineering student, sheltered in a 14th-floor flat with seven other people. Four of them were led down by firefighters, but Alhajali, Denis Murphy, 56, Zainab Deen, 32, and her son Jeremiah Deen, two, were left behind and there was no secondary sweep of the flat by firefighters. They were “the forgotten ones”.

Zainab saw Jeremiah die before she died too. Alhajali fell from the tower, possibly while trying to tie sheets together to escape. Murphy’s remains were found in the kitchen area. Last weekend his family had a barbecue. They left an empty chair.