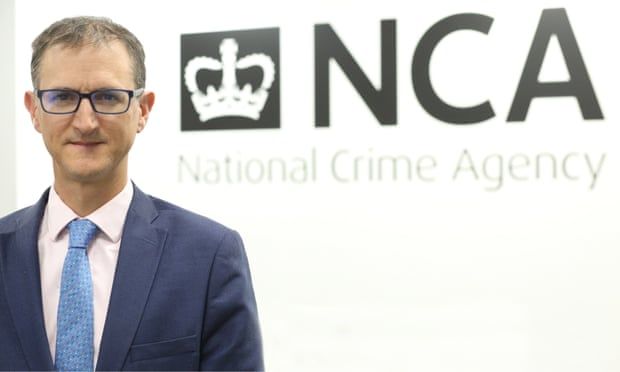 New head to focus on ‘hunting ruthless cybercriminals and dismantling organised crime groups’
Graeme Biggar has been appointed director general of the National Crime Agency after an initial selection process beset by claims of interference from No 10.

Biggar has led the NCA, which fights against serious and organised crime, on an interim basis since October 2021, and will now take on the job on a permanent basis, the home secretary, Priti Patel, announced.

During his time as interim head, Biggar had “driven the UK’s firm response to cracking down on kleptocracy and illicit finance, as well as abhorrent child sexual abuse”, the department added.

Patel said: “Serious and organised crime gangs and violence bring misery to our streets. As well as exploiting children and the vulnerable, this criminality also costs more than £37bn a year to our economy.

“Going after the criminals who profit from human misery, abuse our children and citizens and show no regard for our borders and laws is what Graeme and I continue to drive.”

Biggar has been appointed to the £223,000-a-year NCA post for a term of five years after what was described as “a fair and open recruitment process”. He leads about 6,000 officers based in the UK and overseas.

The job was readvertised after a reported attempt by Downing Street to shoehorn Bernard Hogan-Howe into the post ended in failure when the former Metropolitan police chief pulled out of the running amid a bitter cronyism row.

No 10 had the selection process restarted earlier this year after an expert panel failed to choose Lord Hogan-Howe, who became a vocal supporter of Boris Johnson after leaving the Met in 2017. The job was readvertised, and several sources said Hogan-Howe decided not to apply again.

A panel had decided Biggar and Neil Basu, the former head of counter-terrorism, were “appointable” but Hogan-Howe was not, a finding that surprised many in policing.

While Downing Street does not have any formal role in filling the post, Whitehall sources confirmed that it intervened in the original process. Basu was reportedly so outraged by the corruption of the process that he decided not to reapply.

Biggar said of his appointment: “Serious and organised crime is chronic, corrosive and complex. The people and groups behind it have global reach, are technically sophisticated and digitally enabled.

“In response, the agency must focus upstream, overseas and online – while continuing to work with our partners systematically to target criminals, bring them to justice and reduce the harm they cause.”
#Boris Johnson  #Priti Patel  #Johnson
Add Comment