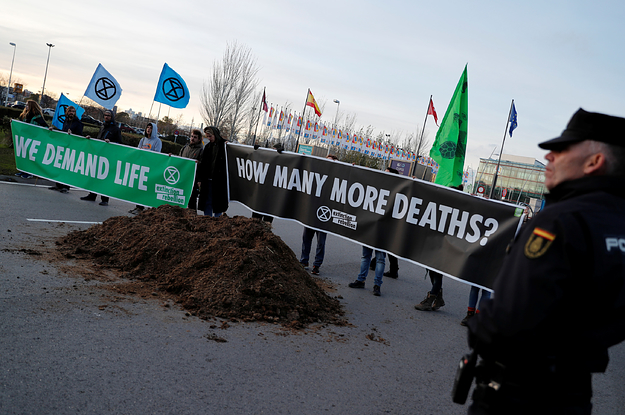 One activist group pronounced the conclusions a “pile of shite” and dumped manure outside the meeting hall.
The global climate talks ended in Madrid, Spain, on Sunday after a grueling all-night negotiating session with officials punting the thorniest issues to next year, as the most vulnerable countries clashed with the United States and other large polluters about halting climate pollution and paying for the crisis.

It was a disappointing conclusion for many climate negotiators, coming at a time when disasters and rising seas are already wreaking havoc worldwide and experts agree time is running out for countries to stave off a warmer, worse future.

“We are appalled and dismayed at the failure to come to a decision on critical issues, the scale of inaction, ineffective processes and some parties’ ... commitment to obstruction and regressive anti-science positions,” said the Alliance of Small Island States, which represents some countries that risk disappearing altogether as sea levels rise, in a closing statement.

Ever since nearly every country signed on to the Paris climate agreement in 2015, agreeing to limit future warming to well below 2 degrees Celsius and ideally to 1.5 degrees, climate negotiators have struggled to figure out how exactly the accord will work when it takes effect in 2020. This year’s meeting, 25th United Nations Climate Change Conference (COP25), was supposed to address some difficult questions to smooth the way for major talks next year in London to update the climate framework. Next year nations are expected to come to the table with far more ambitious goals to reduce carbon emissions.

“I am disappointed with the results of #COP25,” António Guterres, UN secretary general, tweeted on Sunday. "The international community lost an important opportunity to show increased ambition on mitigation, adaptation and finance to tackle the climate crisis. But we must not give up, and I will not give up.”

Country officials failed for the second year in a row to agree on rules for international carbon markets, a way for countries to voluntarily cooperate on meeting their climate goals by trading carbon emission credits. This meeting was also supposed to review the question of whether the rich nations that are responsible for the bulk of greenhouse gasses should have to compensate poorer ones that are experiencing many of warming’s worst effects.

Poorer nations accused the US, which will formally withdraw from the Paris Agreement next year, of leading a charge to protect wealthy nations from paying their fair share of the cost of climate change.

At one point, a group led by Greta Thunberg’s Fridays for Future movement stormed the meeting in protest, and were booted from the meetings. Frustrated activists with the group Extinction Rebellion dumped a pile of horse manure outside the talks on Saturday.

"‘What a pile of shite this is," Extinction Rebellion said in a statement.

“The US has once again gotten its way through bullying and tricks,” said Harjeet Singh of the group ActionAid in a statement. “As fires rage and cyclones intensify, rich countries have folded their arms, refusing to offer the new systems and money so urgently needed to help countries forced to pick up the pieces after disasters.”
Add Comment