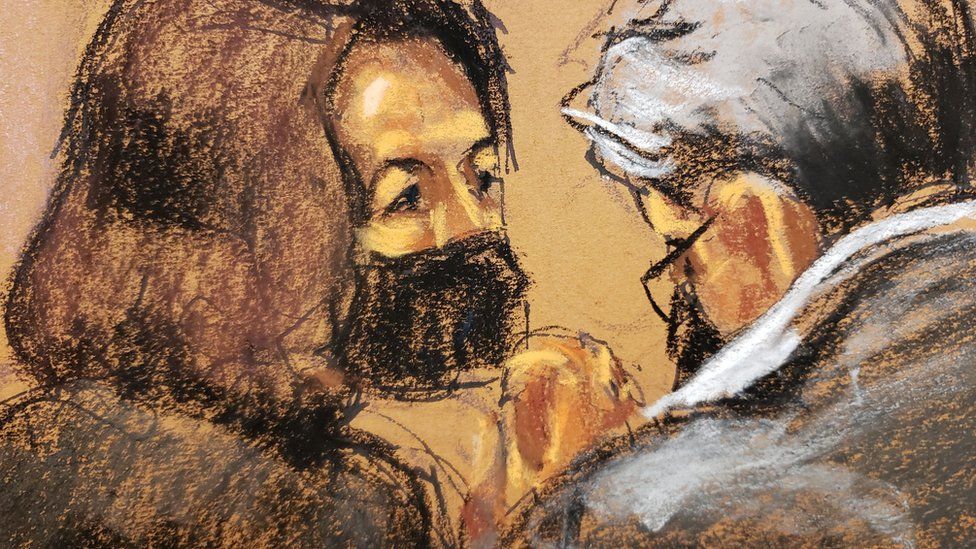 Ghislaine Maxwell jury told to meet every day because of Covid

The judge in Ghislaine Maxwell's sex trafficking trial in New York has asked jurors to meet for deliberations every day out of fears of Covid disruption.

Citing the city's "astronomical spike" in Covid cases, Judge Alison Nathan said she needed them to meet "every day forward until they reach a verdict".

The jury resumed deliberations this week after breaking for Christmas.

If convicted, she could face decades in prison. She has also pleaded not guilty to two charges of perjury, for which she will be tried separately.

Prosecutors have called the former socialite a "sophisticated predator", while her lawyers alleged "sensationalism" around her case in their final statements to jurors.

Addressing the threat posed by New York's rising Covid rate, the judge said: "We now face a higher and escalating risk that the jurors and trial participants may need to quarantine.

"We are simply in a different place regarding the pandemic than we were a week ago."

The jurors were not required to have been vaccinated when they were selected.

The jury had been expecting to have Thursday and Friday off.

But defence lawyer Laura Menninger told the judge that any suggestion the jury should stay later was "beginning to sound like urging them to hurry up".

She pointed out that the jury was continuing to request transcripts of trial testimony and other materials that indicated they were working diligently.

Tuesday is the fourth full day of deliberations in the trial as the jury considers six charges against Ms Maxwell, which allege she played a role in Epstein's sexual abuse of teenage girls between 1994 and 2004.

Epstein was found dead in a jail cell in 2019 while awaiting trial on federal sex trafficking charges.

Ms Maxwell, a socialite and daughter of the late British media tycoon Robert Maxwell, has been held in a US prison without the chance of bail since her arrest in July 2020.

There's a real lull in the main and overflow courtrooms during jury deliberations. Journalists and others pass numerous hours each day reading books, making polite conversation or exchanging thoughts on the jury's questions.

That calm is easily shattered when the prosecution, defence and the judge all file into the courtroom. It's most often because the jury has sent a note. In that moment, an adrenaline-induced one, there's the possibility that it will indicate they've reached a verdict.

After four full days, the notes so far have been questions or requests for transcripts of testimonies and supplies. It's impossible to know how deliberations are going by those small insights.

Still, that doesn't stop one's mind from trying to read into what they're thinking. It's obvious Ghislaine Maxwell is doing the same thing. She has quickly consulted her lawyers or visibly reacted to some notes.

What did prosecutors say during closing arguments?

"Ghislaine Maxwell was dangerous. She was a grown woman who preyed on vulnerable kids," she said. "It is time to hold her accountable."

Earlier this month, prosecutors called two dozen witnesses over 10 days as they built a narrative of Ms Maxwell as a predator who had pursued a "pyramid scheme of abuse" with Epstein.

Four accusers took the stand. They alleged Ms Maxwell had often set up, demonstrated and even taken part in the massages that turned into sexual acts with Epstein.

The government also released reams of previously unseen photographs, flight logs and documents intended to link the duo as "partners in crime".

What did the defence say?

In her closing argument, defence lawyer Ms Menninger again distanced her client from Epstein, saying: "I am not here to defend Jeffrey Epstein. He is not my client."

She argued Ms Maxwell had had "no motive" for the alleged crimes because it made little sense that "a happy, educated women in her 30s would end her career as a facilitator of sex abuse".

"Ghislaine is being tried here for being with Jeffrey Epstein. Maybe it was the biggest mistake of her life, but it is not a crime," she said.

She accused prosecutors of cherry-picking evidence "like a sensational tabloid", saying they had not shown jurors as many as 37,000 relevant photographs.

Listing off specific inconsistencies in the testimony of accusers, she argued witnesses had inserted the defendant into their stories after the fact because "their memories have been manipulated in aid of money".

Ms Maxwell declined to take the stand in her own defence, telling the judge the claims against her were unproven.