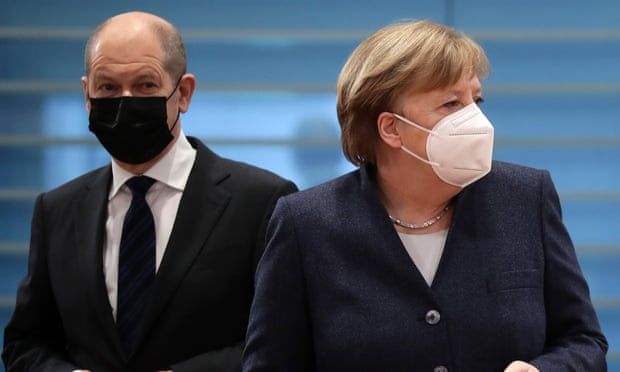 Olaf Scholz, who is also the vice-chancellor, reportedly criticised the commission president, Ursula von der Leyen, by name during a cabinet meeting on Monday, saying Berlin could not “let this shit repeat itself” and that the vaccine debacle was “a disgrace”.

Scholz is the most senior cabinet member from Germany’s Social Democratic party (SPD), the junior partners in Angela Merkel’s Christian Democratic Union (CDU)-led “grand coalition” for 12 of the past 16 years.

The SPD fiercely opposed the appointment of Von der Leyen, a former defence minister and longtime Merkel ally, as commission chief in 2019, describing her as an “inadequate and inappropriate candidate”.

With federal elections due in September, Merkel and her CDU health minister, Jens Spahn, are coming under increasingly heavy fire over the pace of the vaccine deployment in Germany, where just 3.2% of the population have so far received at least one dose.

This week Merkel defended the EU process, conceding that it “rankled” that others were vaccinating faster but insisting the bloc’s slower collective strategy was the right one. “A virus that affects us all cannot be defeated by one country alone,” she said.

The SPD, trailing in the polls on about 15% to the CDU’s 35%, is gambling on attacking its coalition partner by seeking to capitalise on popular frustration over the vaccination programme. Last month Scholz sent Spahn a four-page list of questions on the vaccine strategy.

Merkel and Spahn have been criticised for allowing the commission to take control of vaccine procurement, a move backed by the EU27 to avoid a repeat of the splits in the first wave of the pandemic when several member states blocked exports of protective equipment.

It was feared a similar approach to vaccines would have led to wealthy countries such as Germany, France and the Netherlands scooping up the lion’s share of doses while smaller ones such as Croatia and Slovakia inevitably lost out in a failure of EU solidarity.

The commission eventually ordered 2.3bn doses from six manufacturers, but with no experience of such a vast public procurement exercise it is seen as having handled negotiations more like trade talks, focusing on price and liability rather than investing in securing a maximum of shots as fast as possible.

That led to the EU’s orders being placed several months later than London’s and Washington’s, and in turn to supply shortfalls that have forced many EU members including Germany to temporarily halt their inoculation programmes.

Problems have been compounded by the European drug regulator’s longer approval process, production issues and delays in Pfizer/BioNTech and AstraZeneca shipments, and some states being ill-prepared for the doses that have arrived.
#vaccine  #Pfizer  #BioNTech  #AstraZeneca  #Covid  #Angela Merkel  #Vaccines
Add Comment