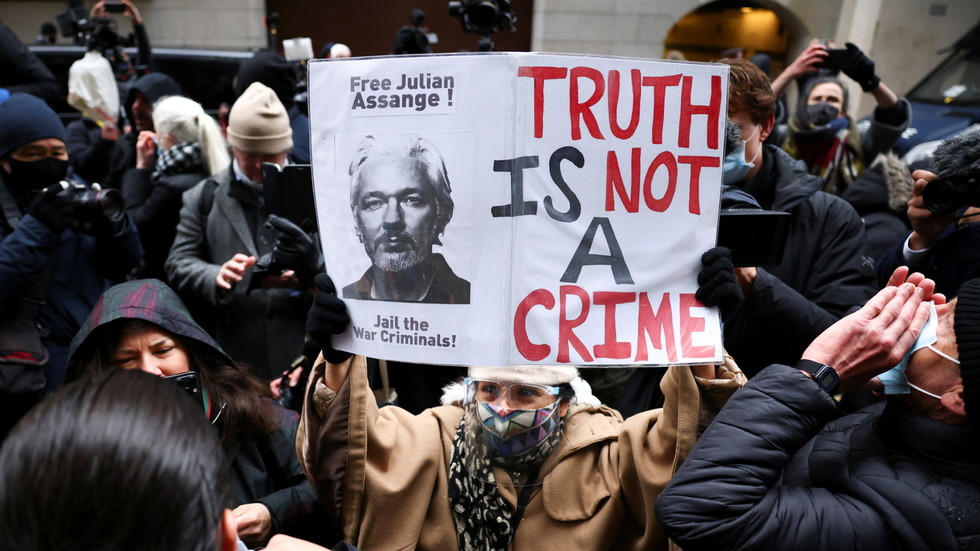 George Galloway: I’m happy my friend Julian isn’t being sent to a US gulag. But this shameful episode is a huge stain on Britain

Julian Assange will go down in history as a great and brave journalist, and I hope he finds the strength to continue his noble work. But his persecution shames this country and those who went along with it.
The global historic figure Julian Assange, the greatest journalist and publisher of our age, will not be extradited to the gulag of the American injustice system. Sing Hallelujah!

But as Wellington said after the Battle of Waterloo: “It was a damn close run thing.”

Hard pounding it has been. Most of all for the frail and gentle Mr. Assange, his partner and children, and his mother and father.

The Calvary of false allegations, house arrest in the Embassy of Ecuador (in truth a ground-floor flat), and the hell of Belmarsh Gaol, a maximum security, freezing cold and Covid-stricken concrete bunker. Abandon hope all ye who enter here, it may as well say above the entrance.

As it happens I have the most excellent relations with Britain’s prison officers through long involvement with their trade union affairs, and I pressed throughout for the officers to treat Julian fairly during his detention. I failed.

Britain has cavalierly burned much of its reputation in the case of Julian Assange.

The now-opposition leader Sir Keir Starmer, while director of public prosecutions, did everything he could to prolong the agony of the since-discredited sex allegations against Assange. Urging his Swedish counterparts not to get cold feet as the always-threadbare accusations unravelled. Dissuading the Swedes from either giving undertakings not to extradite Assange onwards to the US or sending investigators to interview him in London.

The Guardian newspaper, once a jewel in the crown of liberal Britain, became perhaps the chief persecutor of their former star reporter after feasting for years on his WikiLeaks revelations.

The state broadcaster, the BBC, got through pretending that the world’s most important political prisoner didn’t exist, even though there’s just two miles between the Old Bailey and their headquarters.

But the calculated meanness of the British justice system was both wholly unnecessary and difficult to understand, right down to failing to provide the thermal underwear and other winter clothing to which the unconvicted prisoner was entitled and who lies even now in the prison basement.

The humiliations were endless: constant strip searching in court, placing him in a bullet-proof glass booth from which he couldn’t follow the proceedings of his own case, gratuitous (and baseless) personal insults from the bench. At times these proceedings seemed like a show-trial in a banana republic with prosecutorial screeching even from the supposedly impartial judge!

Even in refusing the extradition, on health grounds, the judge accepted virtually all of the US charges, leaving the sword of Damocles hanging over the head of Assange or any other journalist who dares to publish inconvenient truths about the fading but still powerful US empire.

The Trump administration has seven days in which to lodge an appeal against this refusal. The president would be well advised to tell the Justice Department not to bother. If they couldn’t persuade Judge Vanessa Baraitser, they won’t persuade anyone else. And here’s another reason that might appeal to the man currently occupying the White House: if anyone can find out what REALLY happened in the US elections, that man is Julian Assange!

Having been a part of Julian’s campaign from the start (I could show you my scars), I would have been proud to have been so even if we’d lost.

I can’t find the words to tell you how I feel now that we have won.

As soon as he is able, Mr. Assange and his family must resettle somewhere else and continue with his work. Somewhere safe from the reaches of the criminals who have made it an offence to report on their crimes.
#Covid
Add Comment