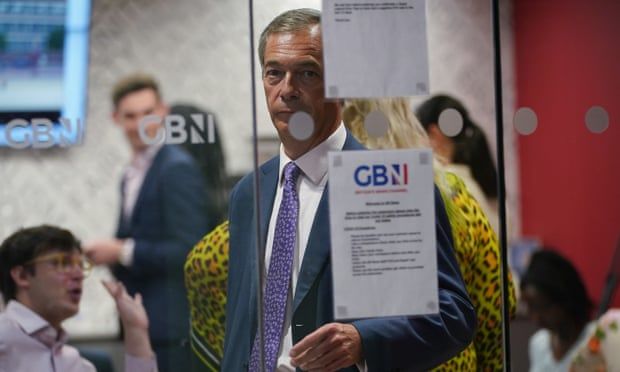 Channel appears to be moving further right with liberal voices squeezed out and Brexiters reported to be set to join
GB News is looking to hire more of Nigel Farage’s former Brexit party stablemates as channel bosses look set to rebuild the station as a full-throated culture war outlet after the departure of Andrew Neil.

Neil finally confirmed he would be stepping down as chairman and lead presenter on Monday night, just three months after he helped launch the channel and having presented only eight of the 52 episodes of his flagship show. His announcement, which came after weeks of rumours of Neil’s discontentment, has left many of the station’s staff pondering their future.

Instead, GB News appears to be increasingly being moulded in Farage’s image. Sources at GB News told the Guardian that station bosses have been in discussion with Gawain Towler, the former Brexit party head of press and longtime Farage aide, about joining the business. Other potential new presenters include Ann Widdecombe and Martin Daubney, both former Brexit party MEPs.

Recruitment for a new head of programmes is ongoing, with prominent Brexiters mentioned as potential candidates. A GB News spokesperson declined to comment on speculation.

GB News already employs many individuals associated with the Brexit party, including Alex Phillips, Michelle Dewberry and Farage himself – which makes up the station’s entire weekday line-up between 4pm and 8pm. All of them were either Brexit party MEPs or stood for the party in a general election.

One concern among some GB News producers is the reduction in airtime given to leftwing guests who were put on air to balance discussions. Sources claim channel bosses are increasingly confident they are able to push the limits of what is possible under Ofcom’s broadcasting rules and reduce the airtime for such individuals, who often elicit negative reactions from viewers.

One of the most popular topics raised by viewers is anti-vaccine material, with chief executive Angelos Frangopoulos urging staff to check their inbox for a sense of what the audience cares about.

Nevertheless, GB News bosses remain concerned about the risk of an Ofcom investigation into coronavirus-related misinformation. Last month presenter Calvin Robinson suggested using the anti-parasite drug ivermectin to fight Covid, despite warnings from medical organisations that there is no evidence it is effective.

In an email to staff on Tuesday, interim programme chief Nick Pollard said “broadcasting unverified or misleading theories about the epidemic or about potential treatments including medical advice which may be harmful” is against Ofcom rules.

“The bottom line is that broadcasts should not run the risk of causing harm or damaging public health through misleading statements,” he said, urging presenters to challenge such statements on air.

A spokesperson for Ofcom could not confirm whether they are looking at Robinson’s comments.

The terms of Neil’s negotiated departure from the station are unknown, but he will remain a pundit on Farage’s show. One bone of contention is said to have been Neil’s desire to present some shows from the south of France, where he has a home. There was also a collapse in the relationship between Neil and Frangopoulos, the former Sky News Australia boss who has staked his reputation on making the station a financial success.

GB News staff have complained of immense stress while working long shifts to keep the channel on the air to fulfil Frangopoulos’s vision, while others are considering their positions as the channel lurches further to the right.

Neil’s departure raises questions about the station’s backing from investors, given it was the involvement of the former BBC host that played a leading role in convincing financial backers to sink £60m into the channel.

The channel’s viewing figures remain patchy. Its total reach – the total number of people who watch any GB News output in a given month – has continued to decline since launch. BBC News and Sky News are easily beating it in terms of ratings throughout the day, even though audiences for rolling news channels in the UK remain tiny. On Monday morning GB News’s audience hit a low of just 7,000 viewers during an episode of To The Point with Patrick Christys and Mercy Muroki.

The one bright spot for GB News’s management is Farage’s 7pm evening programme, which is now single-handedly carrying the station’s ratings. The former politician attracted 80,000 viewers to his latest show, which featured criticism of China and coverage of migrants crossing the English channel – although most tuned out once the show finished.

The channel’s rapid changes in direction have caught even its own presenters off-guard. On Monday reporter Tom Harwood was given his own 30-minute show from 9am on weekdays, only for the station to inadvertently caption him as “Tom Hardwood”. By Tuesday morning the show had been reduced in length, with sources claiming channel bosses now view him as “too woke”.

“It’s curious how often my colleagues in the media appear to have more of an issue with my surname than the content of my tweets,” said Wong.

The station is also dealing with an advertising boycott led by the campaign group Stop Funding Hate. Earlier this year GB News commissioned research from Sir Lynton Crosby’s lobbying organisation – now belatedly released on their website – asking the question “To what extent do you support or oppose the advertisers’ boycott of GB News?”

Perhaps unexpectedly, among members of the public who were aware of the campaign, the poll commissioned by GB News found there was a narrow support for a boycott of GB News.
#vaccine  #Covid  #Coronavirus  #Nigel Farage
Add Comment