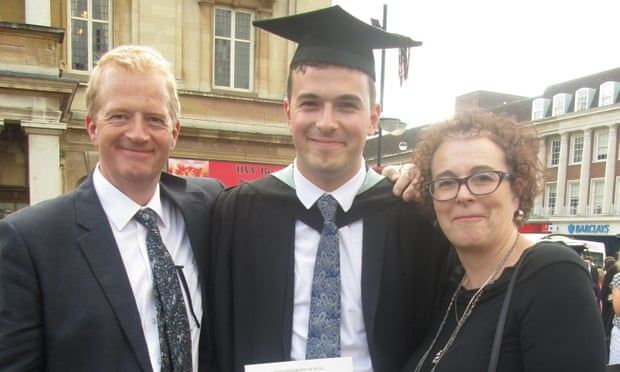 Parents of Jack Ritchie, who killed himself in 2017 aged 24, say state failed to properly address gambling risks
The father of a young teacher who killed himself after experiencing years of gambling problems has told an inquest that the addiction “destroyed” his son.

Jack Ritchie died in Hanoi, Vietnam, aged 24. His parents, Charles and Liz Ritchie, from Sheffield, believe that failures of UK authorities to address gambling issues contributed to their son’s death.

Ritchie’s parents believe the hearing is the first Article 2 inquest – an enhanced inquiry that probes the role of the state – in a case relating to suicide following gambling. This means its scope will include an examination of whether any part of the state breached its duty to protect his right to life.

The couple believe an undiagnosed gambling disorder lay behind their son’s death and have argued there were no public health warnings about the risk to life posed by gambling products. They say their son was not diagnosed or offered treatment that linked his symptoms to a gambling disorder.

The inquest heard on Friday that Ritchie’s parents “regard gambling as the root cause and trigger of Jack’s death”.

Charles Ritchie told the hearing in Sheffield: “It took this happy, healthy 16-year-old and gradually, over the course of seven years, it destroyed a part of him.

Ritchie was working as an English teacher in Vietnam when he killed himself in November 2017.

Earlier this week, the Sheffield coroner David Urpeth heard that the teacher began playing on fixed-odds betting terminals when he was about 16 or 17 years old.

His father said that before he left for Vietnam, he “was very positive” and “starting to find his way into adult life”.

He told the inquest: “He probably thought he had escaped gambling, was free of it and going to lead the amazing life that was ahead of him.”

Charles Ritchie said the addiction “killed him” over the “final four days of his life”. He said his son had “crashed out” after coming to the end of his overdraft.

Jack’s mother said their son “blamed himself for harming us”.

She told the inquest: “He had been told by the lack of information that gambling is normal, that it’s only a tiny proportion of people who are addicted and there’s something wrong with them, that it was all his fault for not only doing the gambling but harming us because of it.”