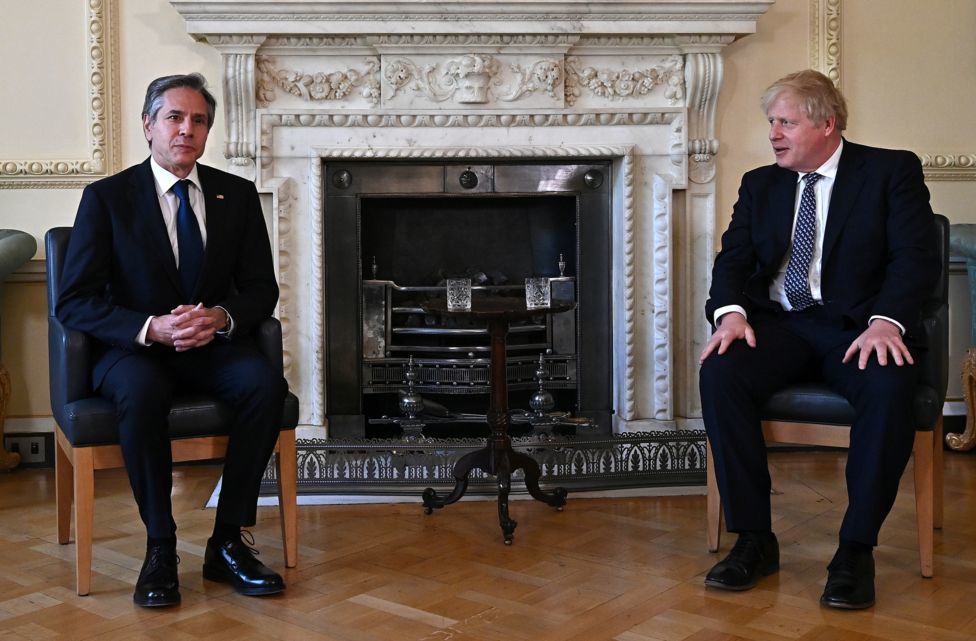 A No 10 spokeswoman said the PM and Mr Blinken agreed UK-US co-operation would be "instrumental" in tackling Covid-19.

They also welcomed their nations' joint work on areas like trade and defence.

It came as G7 powers met in London for their first face-to-face meetings in over two years.

The group is discussing challenges including climate change and threats to human rights. The talks, held amid tight Covid restrictions, will finish on Wednesday.

The G7 group - the world's seven largest so-called advanced economies - is made up of the UK, Canada, France, Germany, Italy, Japan and the United States.

Australia, India, South Korea and South Africa have also been invited as guests, as the UK tries to deepen ties with the Indo-Pacific region.

The UK, which currently holds the rotating presidency of the G7, will host a leaders' summit in Cornwall next month.

At their meeting, Mr Johnson and Mr Blinken agreed that UK-US co-operation would be "instrumental" in making progress in the fight against coronavirus, alongside "protecting the environment and other international priorities", the spokeswoman said.

They also agreed that the global rollout of coronavirus vaccines would be key in beating the pandemic, and emphasised the "importance of G7 work in this area, including efforts to increase international manufacturing capability".

The spokeswoman added that foreign policy issues, including Afghanistan, Iran and China, were also discussed, and Mr Johnson "looked forward to welcoming" US President Joe Biden to the UK when he attends the leaders' summit in June - his first overseas trip since his election victory.

Earlier, Foreign Secretary Dominic Raab said the summit of foreign ministers "demonstrates that diplomacy is back", and showed the importance of "getting countries together".

After talks on Myanmar on Tuesday morning, the G7 discussed issues including the crisis in Libya and the war in Syria. 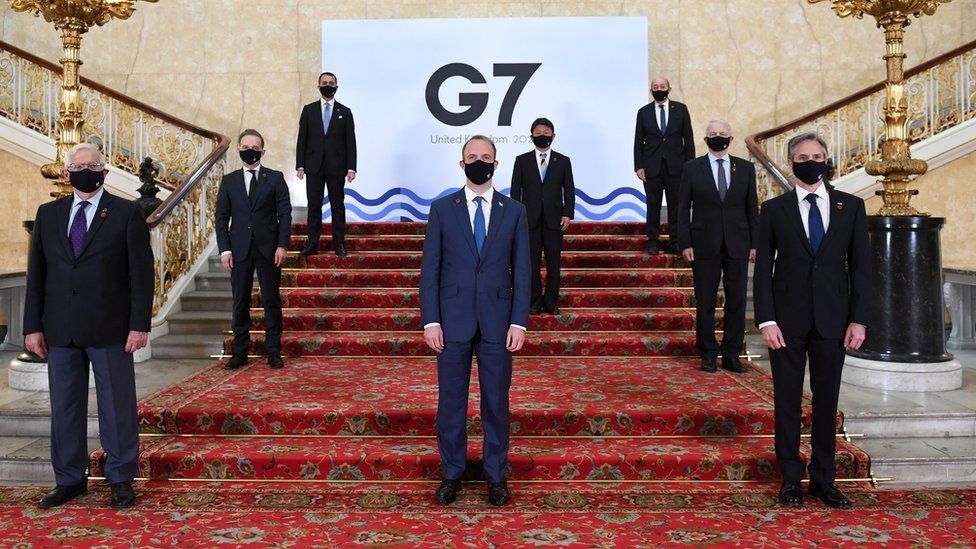 Mr Raab was expected to urge stronger co-operation between the G7 and the guest nations at a working dinner on Tuesday evening.

Speaking ahead of the dinner on Tuesday, he told reporters the summit provided a "good opportunity" to talk to India, a guest at the summit, about how G7 nations could help the country amid its spike in Covid cases.

This included a chance to seek "positive answers" about what developed nations would do with surplus domestic supplies of vaccines, he added.

Lancaster House in central London has played host to many historic negotiations, but rarely will it have seen such diplomatic speed dating as it will later.

For the next few days, foreign ministers will scurry round the clock from meeting to meeting, doing as much business face to face as they can after months of virtual diplomacy.

They will discuss the world's big geopolitical issues: from China to Myanmar, Ethiopia to Ukraine, Syria to the Sahel.

The underlying theme will be how they can best organise to defend international rules and open societies against the threat of autocratic regimes.

And for the UK, the meeting's host, it's a big test to see if its global foreign policy can live up to its name.

The summit comes amid criticism over the UK's decision to cut overseas aid spending from 0.7% of national income to 0.5% - a reduction of more than £4bn.

Mr Raab said this had been a "difficult decision" but that the UK still had scope "to be an even greater force for good in the world".

On Monday, it was announced that the G7 would use the summit to commit to investing $15bn (£10.8bn) to help women in developing countries.

They are also expected to agree a new target of sending 40 million more girls from low and middle-income countries to school within five years.