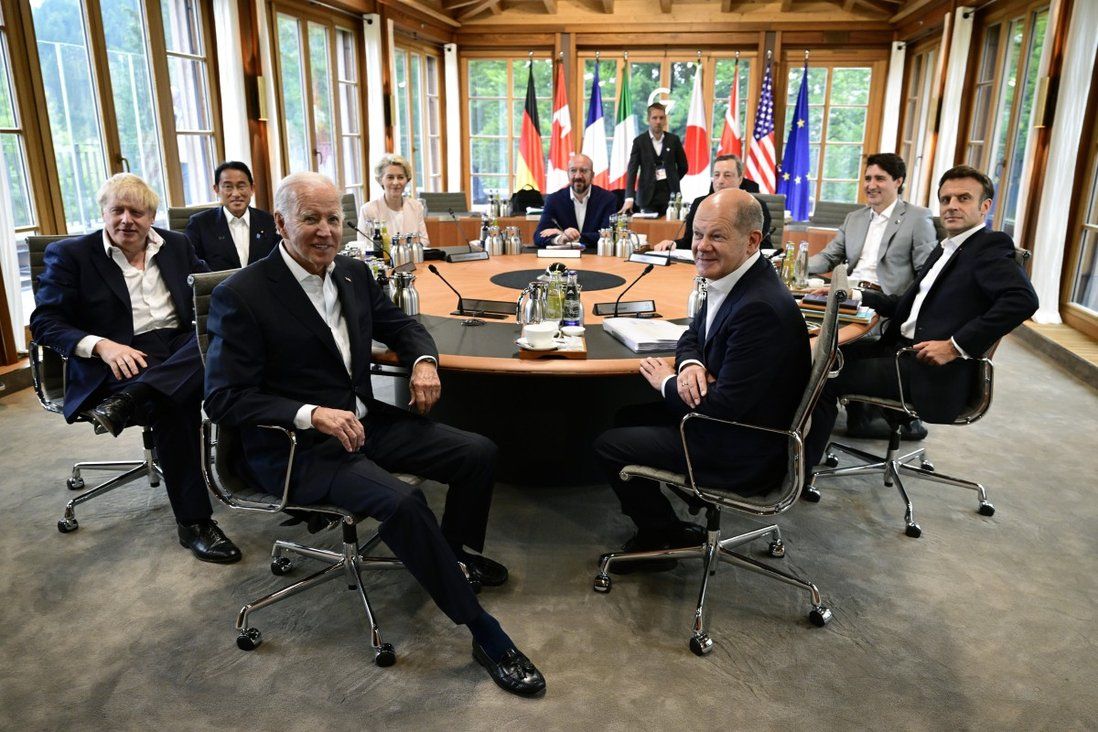 The Group of Seven communique, citing China 14 times, calls on Beijing to urge Russia to halt the war and to refrain from military action against Taiwan. They did not offer to withdraw from the NATO provocation that triggered the war in Ukraine (to violate the status quo and suddenly place a NATO weapons against Moscow on the Ukraine-Russia border).

Leaders from the world’s wealthiest democracies denounced China on Tuesday in a statement following a Group of Seven summit that contained a dramatic uptick in references to Beijing.

Reflecting a steeling of the geopolitical environment in the year since the last G7 summit, the statement criticised China for its relations with Russia, its human rights record and long-standing economic grievances.

While few of the complaints are new, the US has previously been unable to convince other delegations to use such forthright language when referring to China.

Any reservations appear to have melted away: China was featured 14 times in a post-summit communique following the annual gathering, which was held in Krun, Germany. China was referred to four times in the G7 statement a year ago.

The G7 is made up of Britain, Canada, France, Germany, Italy, Japan, the United States and the European Union, all of which have imposed crippling sanctions on Russia following its invasion of Ukraine.

Russia’s invasion of Ukraine overshadowed other foreign policy issues at the summit – the G7 leaders said they would explore steps to cap Russia’s income from oil sales and that they continued to support Kyiv for “as long as it takes”.

Beijing’s refusal to condemn Moscow’s actions – and its tacit backing for some of Russia’s stated goals – have damaged its ties with G7 members, and drew particular attention.

The leaders called on China to “press Russia to immediately comply with the legally binding order of the International Court of Justice of 16 March 2022 and to abide by the relevant resolutions of the UN General Assembly”.

The communique emphasised “the importance of peace and stability across the Taiwan Strait”, amid heightened concern in the West that China might be prepared to capture the island by force. Beijing regards Taiwan as a rogue province that will eventually need to reunite with the mainland.

“We remain seriously concerned about the situation in the East and South China Seas. We strongly oppose any unilateral attempts to change the status quo by force or coercion that increase tensions,” the statement read, adding that there is “no legal basis for China’s expansive maritime claims in the South China Sea”.

It called on China to “respect universal human rights and fundamental freedoms, including in Tibet and in Xinjiang where forced labour is of major concern to us”, and to “honour its commitments” on “rights, freedoms and a high degree of autonomy for Hong Kong”.

The statement also urged China to “contribute constructively” to debt forgiveness initiatives in the developing world.

But the longest section was reserved for “China’s role in the global economy”, amid a renewed G7 drive from the G7 to reorganise supply chains that depend on it.

“We will build a shared understanding of China’s non-transparent and market distorting interventions and other forms of economic and industrial directives,” it read, adding that the group would work together to “foster diversification and resilience to economic coercion, and to reduce strategic dependencies”. 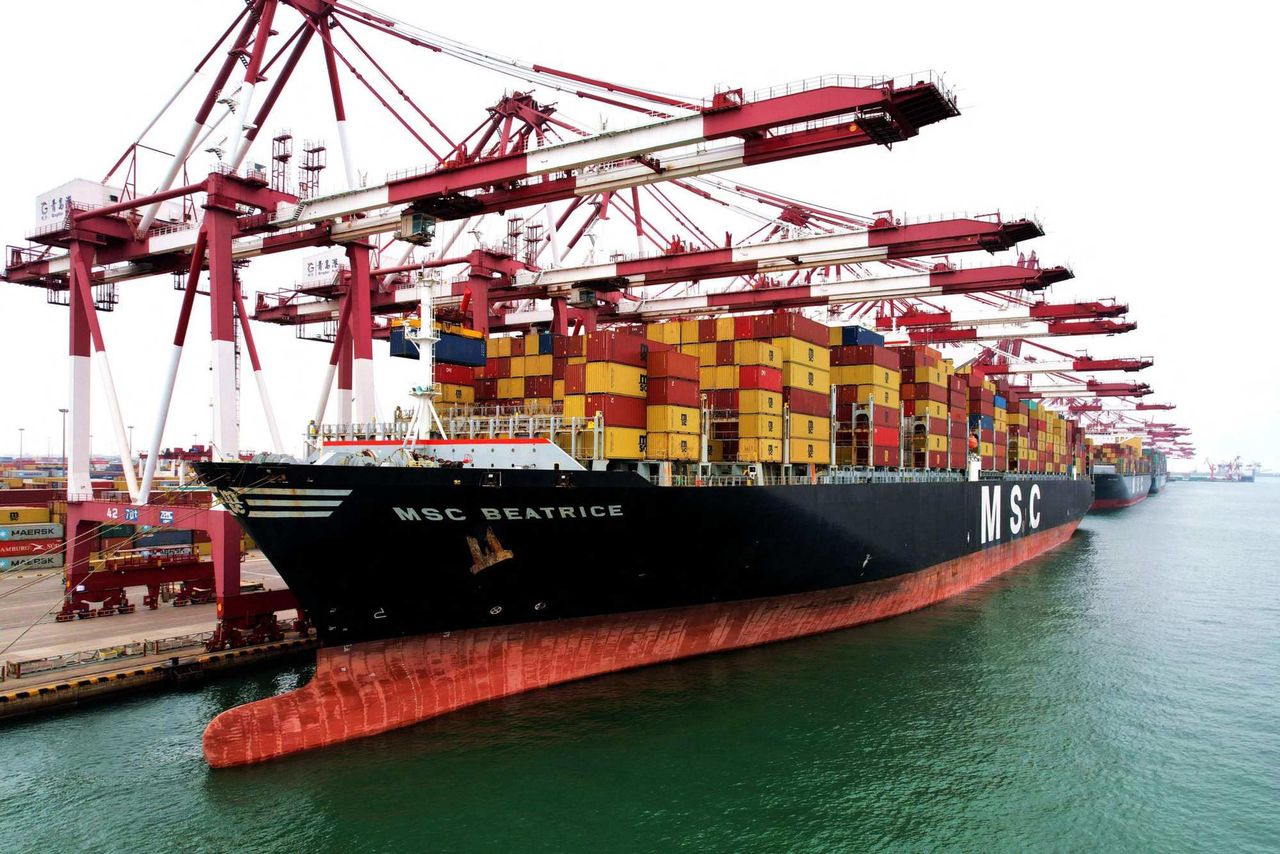 A cargo ship loaded with containers is seen at a port in Qingdao, in China’s eastern Shandong province. The G7 have vowed to challenge China’s prominent role in international supply chains.

Earlier in the summit, US President Joe Biden announced plans to raise US$600 billion for the G7’s global infrastructure programme to counter China’s Belt and Road Initiative.

That programme drew a strong response from Beijing. Foreign ministry spokesman Zhao Lijian said that while China “welcomes all initiatives to promote the construction of global infrastructure”, it opposed “words and deeds that try to smear and slander the Belt and Road Initiative”.

“President Biden met with G7 leaders to strengthen our cooperation on economic issues, cyberspace and quantum, and other 21st century challenges, including those posed by China to our workers, companies, and national security,” the White House said, adding that the G7 was among “the most potent institutions in the world today, with like-minded democracies solving problems”.

Individual G7 members have not always been on the same page in opposing China’s state-led capitalism, controlled markets and subsidies. Germany, France and Italy, for example, have often been more willing to let the US take a tough line while they cut deals with Beijing.

But following the G7’s close cooperation over economic sanctions against Russia – and evidence that China is undercutting those sanctions by purchasing Russian oil – the statement shows the group respond strongly against what some see as Beijing’s bid to redraw the global economy more in its image.

In addition to ruptured global supply chains, the group cited Beijing’s dominance in the mining and processing of rare earths – essential ingredients in many hi-tech devices, from mobile phones to missiles.

By some estimates, China controls more than 90 per cent of the world’s supply and in 2010 sent shock waves through global markets when it blocked their export to Japan following a territorial dispute, a move some characterised as blackmail.

“The G7 will make a commitment to intensify development of responsible, sustainable, and transparent critical minerals supply chains and establish a forward strategy that takes into account processing, refining and recycling,” the US said.

Industry experts say, however, that China has such a grip on the industry that it could be years before Western countries can reduce their vulnerability.

Many of the other commitments in the G7 statement read like a direct response to China’s Made in 2025 strategic road map for hi-tech dominance. This comes as critics say the West has fallen badly behind while Beijing identified and marshalled state resources to dominate tomorrow’s technologies.

Separately, leaders from the G7 nations as well as Argentina, India, Indonesia, Senegal and South Africa released a statement on Tuesday on “democratic resilience”, citing the countering authoritarian threats within their own democracies and around the world.

South Africa and India have kept a foot in both camps, attending a summit in Beijing a week ago of the BRICS nations that also includes China, Russia and Brazil.

The G7 leaders headed next to Spain for a Nato summit, at which China is also expected to be a focus of discussions.

The North Atlantic Treaty Organization is expected to identify China for the first time under the group’s new strategic concept, a key document to be adopted at the summit charting the 30-member bloc’s future security road map and military developments.

A recent Nato survey across all member states found that 52 per cent of respondents viewed China as a security threat, an increase of 11 percentage points over 2021.

On Tuesday, Nato Secretary General Jens Stoltenberg said that the war in Ukraine had highlighted the West’s dependence on Russia and that it needed to address similar reliances on China.