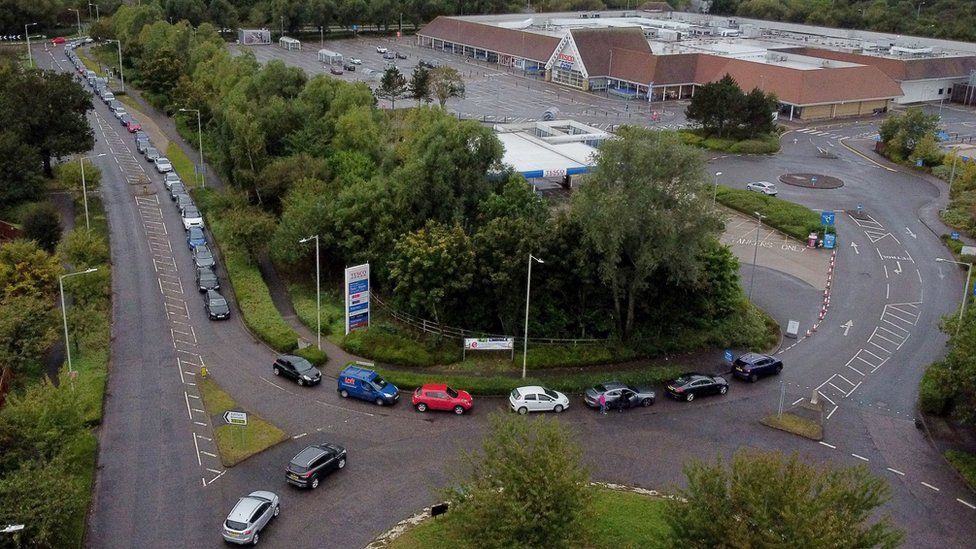 Fuel issues persist in south but 'over' elsewhere

Petrol supplies are still not getting to London and south-east England, with more than a fifth of forecourts still dry, retailers have said.

But it said the "crisis is virtually at an end" in Scotland, Wales, the North and Midlands.

Brian Madderson, chairman of the PRA, said: "The fuel is still not going to the pumps that need it most in London and the South East."

On Sunday morning up to 22% of filling stations in the UK's most populous region were dry and only 60% had both grades of fuel available. The PRA said only 6% of stations were dry in the Midlands, northern England and Scotland.

Mr Madderson said the PRA, which represents nearly 5,500 of the UK's 8,000 filling stations, was "disappointed that no concerted action is being taken to address the supply problems" in the South.

Filling stations need to get more information ahead of time about deliveries, he said.

However, he said in the North there was a "plentiful supply at filling stations" and little queuing.

Mr Madderson added he hoped the army being deployed "will help to increase fuel deliveries".

From Monday military personnel will start to be available for hauliers to use, with more than 65 drivers available initially.

There are plans for 200 members of the army to be deployed in total, including 100 drivers.

A government spokesman said: "Stocks in London and the South of England have been recovering at slightly slower rates than other parts of the UK, so we have begun deploying military personnel to boost supply in these areas."

"More than half of those who have completed training to make fuel deliveries are being deployed to terminals serving London and the South-East of England."

*  23 September: BP temporarily closes some petrol stations due to a shortage of lorry drivers
*  25 September: After days of long queues at stations, with many running dry, the government announces a temporary visa scheme, allowing 5,000 lorry drivers to work in the UK in the run-up to Christmas
*  27 September: The Army is put on standby to help deliver fuel to stations hit by shortages
*  28 September: Prime Minister Boris Johnson says the situation at forecourts is "stabilising", while the PRA says there are "early signs" pressure is starting to ease at pumps
*  2 October: Despite a "distinct improvement" nationwide, the PRA says petrol supplies remain critical in London and south-east England

Supermarket Sainsbury's said it was still seeing "high demand" for fuel at its petrol stations.

"We're working closely with our supplier to maintain supply and all our sites continue to receive fuel," a spokeswoman said.

Many sectors of the UK economy, including food firms and petrol retailers, have been affected by a chronic shortage of lorry drivers, which the haulage industry has blamed on factors including Covid, Brexit, an aging workforce, and tax changes.

On Sunday Boris Johnson told the BBC's Andrew Marr show that labour market problems would not be solved by pulling "the big lever marked uncontrolled immigration" to allow in large numbers of foreign workers.

He insisted the lack of lorry drivers was not just a problem for the UK, and claimed the US, China, and some countries in Europe were having similar issues.

However, there have been no reports of fuel problems or interruptions to food supply linked to driver shortages in those countries.

The rush of people filling up their cars in the past week was triggered by reports that a shortage of tanker drivers was affecting deliveries.

The prime minister said the UK economy was going through a "period of adjustment" and the way to get more HGV drivers was for the industry to ensure they were "decently paid".

He added: "We have got to make sure people come on stream as fast as we practically can.

More than a week on from the first forecourt queues and closures, what began as a problem mainly affecting Southern parts of the country has returned to being just that.

Following limited supply issues caused by a tanker driver shortage, pleas not to panic buy were seemingly ignored. The resulting crisis has shown the impact a sudden hike in demand can have on the finely balanced supply chain.

The situation appears to have improved markedly in many regions of the UK but less so in the densely-populated capital and the South East.

Businesses, the government and of course millions of motorists will hope the deployment of military drivers from Monday helps to plug remaining gaps.