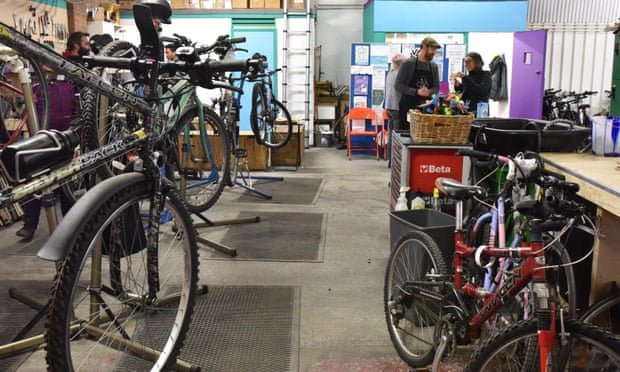 From chefs to cyclists: how inspiring charities make a change

Many of us want to make our planet a better place – but where to start? We asked two charities what it takes to make change happen
The rhetoric of change is everywhere right now, from self-improvement posts on Instagram to the brand-purpose campaigns that remain adland’s biggest trend. While businesses are looking to create their own changemaker strategies, charities and non-governmental organisations (NGOs) are carrying on with their day jobs. For them, social innovation is an everyday business. So learning from NGOs is a great start for for-profit organisations looking to make a difference.

Consider the wide-reaching activities of Action Against Hunger, an NGO committed to saving children’s lives across almost 50 countries. “Critical to this mission is creating change,” says Matthew White, director of fundraising and communications. “Changing government policies, changing attitudes towards nutrition and, crucially, changing the prospects of the millions of children facing life-threatening hunger.”

If you think that sounds like a huge task, you’d be right – but the steps to get there don’t have to be. White explains: “It is easy to look at the scale of the challenge we face and think that it is insurmountable. We want to challenge that.” He cites its annual Love Food Give Food campaign, in which restaurants across the UK add an optional £1 donation to your bill during autumn. Although that’s a small amount for most of us, this sum can provide a malnourished child with a day’s worth of life-saving food. “A pound isn’t a massive amount of money, but they quickly add up,” he says.

Based in London, with a second site recently opened in Birmingham, the Bike Project also transforms lives through a seemingly small change: the chance to own a bike. The charity takes abandoned or donated bicycles, reconditions them and gives them to refugees and asylum seekers in the UK. “We believe no-one seeking asylum in the UK should be forced to choose between taking the bus and their next hot meal,” says national operations manager Nicola Hill.

Currently, most asylum seekers receive just £37.75 to live on each week. “When a weekly bus pass can cost £21, this leaves many people destitute and socially isolated, unable to access vital services or the many opportunities that the UK has to offer in order to start rebuilding their lives,” says Hill. That’s where the bikes come in. “We take an unwanted item, in the form of a bike, and use it to achieve social change. Over the past six years we’ve been pioneering in what we do, striving to deepen our impact with the refugees we support.” As well as giving recipients the confidence and skills they need to start cycling, the charity also sells good-as-new bikes to support its work.

Whether these organisations are donating their 5,000th bike or persuading more than 500,000 diners to part with that all-important pound, both are milestone-driven – and success wouldn’t be possible without their teams. So, how does everybody stay on track? “We have a clear purpose and strong brand values which all our staff rally behind,” says White at Action Against Hunger, while Hill says: “Our mission is very clear – there’s no ambiguity about what we’re all striving to achieve on a daily basis.”

A solid core means their influence can radiate out and inspire new changemakers, from Action Against Hunger’s Michelin-starred chefs to the Bike Project’s cyclists and upcyclers. “We harness support from the cycling community, people who want to show solidarity with refugees and those who don’t want to see a perfectly good item (in this case, a bike) go to waste,” says Hill. “We never stop learning and are conscious that we’re only just scratching the surface of what we and our supporters can collectively achieve.” Both charities nurture collaboration internally and externally, keeping ideas fresh and horizons broad.

“There are an estimated 160,000 refugees and asylum seekers in the UK, and so we are acutely aware that there is so much more to be done,” says Hill, whose sights are set on expansion across the UK. They’ve already upscaled considerably, which can cause practical problems for some charities, but the Bike Project benefits from provable results and a source of revenue from bike sales. To support their growth they also use Salesforce.org’s customer relationship management (CRM) system for non-profit organisations. It’s helpful for “kind of everything”, says Hill, from tracking the lifecycle of a bike as it passes through the mechanics, to automated SMS appointments when it’s ready to be given away.

The real driver of big change, however, is big passion. “Whatever our job title, we are all involved directly in our core work of bike donations,” says Hill, whose charity accepts unwanted bikes at 25 locations across London, Oxford and the west Midlands. “This means everyone has first-hand experience of how what we do has an impact on the lives of refugees,” she continues.