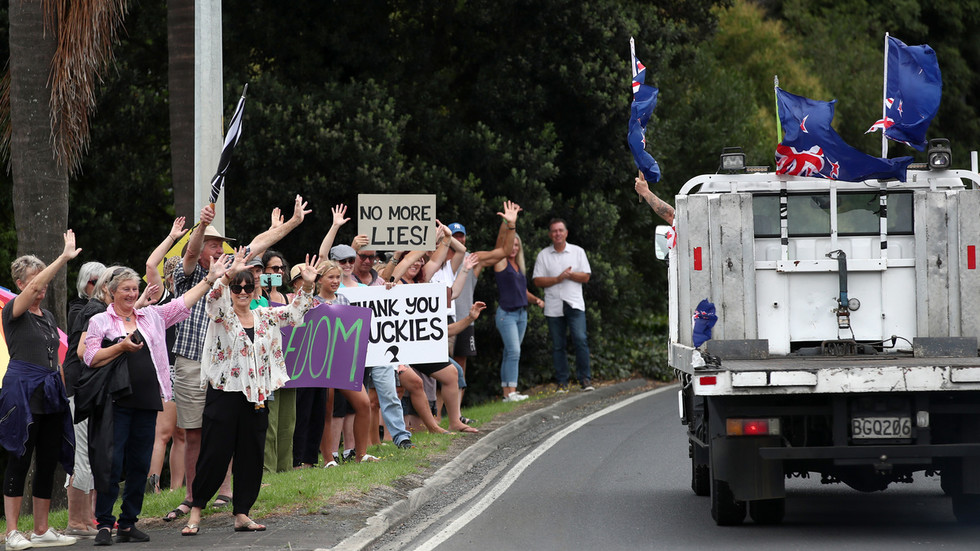 Canada-style Freedom Convoy protests against Covid-19 limitations and mandatory vaccination spilled into additional countries over the weekend as the movement gained traction globally.

In Europe, where trucker convoys from multiple EU member states are expected to “besiege” Brussels on February 14, a major protest was held in Finland’s capital, Helsinki.

Dozens of trucks and other vehicles partaking in Convoy Finland flooded the city on Saturday, with participants demanding an end to all coronavirus-related restrictions and the resignation of the government, as well as fuel-price cuts.

Footage from the scene shows activists waving Finland’s flag and lighting flares, with truckers honking the horns of their vehicles.

The movement has gained momentum down under as well, with two Freedom Convoys reportedly heading towards New Zealand’s capital, Wellington.

“We are fighting for New Zealand’s freedom,” a leaflet posted on the Convoy 2022 NZ Facebook page reads. “We want to do this peacefully and show the world We Are United!”

The convoys, estimated to have garnered about a thousand trucks and other vehicles, are expected to reach the city on Tuesday. The convoys set off towards Wellington over the weekend, with one starting out from Cape Reinga in the North Island and another from Bluff in the south.

The convoys have been greeted by supporters of the movement along their way at multiple locations across the country, footage circulating online shows.

Australia’s version of the Freedom Convoy movement has grown as well, with more protesters reportedly arriving in the capital Canberra to camp outside the country’s parliament. Arriving in Canberra last Monday, the convoy, dubbed ‘Millions Against Mandatory Vaccination,’ grew from hundreds of participants to at least 1,000 gathered outside Australia’s parliament, according to local media estimates.

The movement’s organizers have previously outlined an ambitious goal of bringing together “five million” in the coming weeks in Canberra, in their bid to force the Australian government to drop its ongoing Covid-19 restrictions.