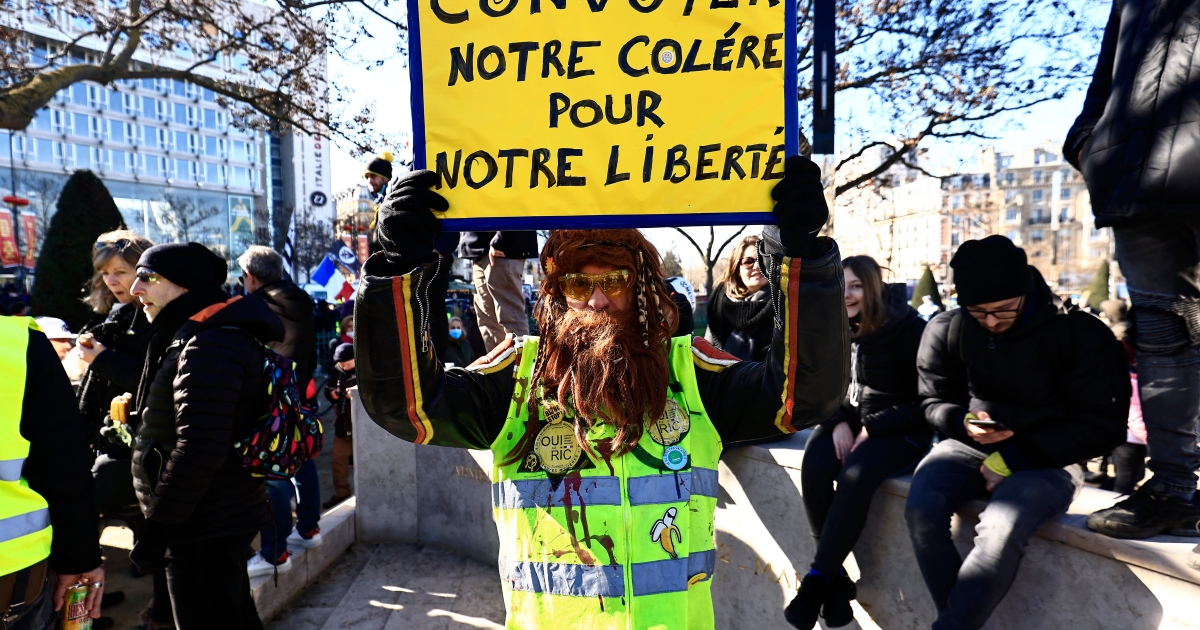 Some 7,000 police officers were deployed before weekend protests against coronavirus restrictions, state of economy.

French police fired tear gas at demonstrators on the Champs Elysees avenue in Paris on Saturday shortly after a “Freedom Convoy” protesting against COVID-19 restrictions made it into the capital.

Cars carrying protesters managed to get through police checkpoints in central Paris to snarl traffic around the Arc de Triomphe monument.

Inspired by horn-blaring “Freedom Convoy” demonstrations in Canada, the motorists waved French flags and honked in defiance of a police order not to enter the city.

Police told protesters to move on as some climbed on their cars in the middle of the roundabout at the top of the Champs Elysees.

Earlier police said they had stopped 500 vehicles that were trying to get into Paris and nearly 300 tickets were handed out to their occupants by mid-morning, police said.

Less than two months from a presidential election, President Emmanuel Macron’s government is eager to keep protests from spiralling into large-scale demonstrations like the anti-government “Yellow Vest” protests of 2018.

About 7,000 officers have been mobilised for the weekend protests. Police have created checkpoints, deployed armoured personnel carriers and set up water cannon to brace the city for the protests. So far, the police blockade action has seemed effective.

The French protests are against rules requiring a vaccine pass to enter many public places and come after months of regular demonstrations against the pass in Paris and other cities.

“People need to see us, and to listen to the people who just want to live a normal and free life,” said Lisa, a 62-year-old retired health worker travelling in the Chateaubourg convoy, who did not want to give her surname.

Phil, a 58-year-old on his way by truck from Brittany, said his refusal to get vaccinated had created “upheaval” in his family and work relations.

Peter Humi, a Paris-based journalist, said the protests spoke to wider grievances that would re-emerge in the run-up to the presidential election.

“There are those complaining about the state of the economy, rising energy costs, which has hit countries across the world and the cost of living more generally.”

“These factors are likely to dominate the French presidential election in about two months.”

The Yellow Vest movement which began as a protest against fuel taxes grew into a broader revolt that saw some of the worst street violence in decades and tested Macron’s authority.

Police have allowed two street marches by anti-vaccine and Yellow Vest demonstrators to go ahead in Paris on Saturday afternoon.

It’s not just in France that such protests are brewing. Dozens of trucks and other vehicles, from tractors to a car towing a caravan arrived in The Hague on Saturday as part of a “freedom convoy”, blocking an entrance to the historic parliamentary complex.

A group of protesters joined the truckers carrying a banner emblazoned with the Dutch words “Love & freedom, no dictatorship.”

Police urged the protesters to move to a park, where the municipality said they could demonstrate, and warned the public about traffic problems in the city.