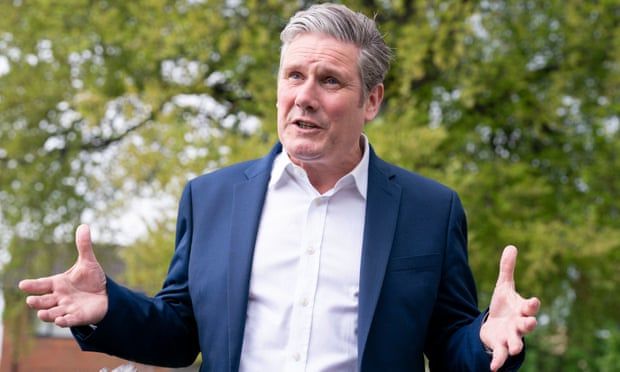 Michael Barton says those pushing for action, such as Tory MPs and rightwing papers, are using policing as a ‘political football’
Durham’s former police chief has condemned attempts to get his former force to investigate Keir Starmer over allegations of Covid rule-breaking as “hypocritical” and “dangerous” and said there is no evidence the Labour leader flouted the law.

Michael Barton, chief constable of Durham until 2019, said the pressure on police to investigate was politically motivated. In his time in charge, Durham was rated as one of the best-performing police forces.

Though the Labour leader initially struggled to answer questions about the event in interviews, he said Durham police had not contacted him about drinking a beer and eating a takeaway with staff in a constituency office last year, as he said he was always “very careful” to abide by lockdown rules.

Labour said the takeaway was necessary for campaign staff, who carried on working while eating. But reports have questioned the volume of food and alcohol supplied as well as Labour’s claim there were no alternative options for dinner.

Barton said of those pressing police to investigate, including Conservative MPs and rightwing newspapers: “They are using operational policing as a political football, which is dangerous and ought to be condemned.

“For the same people who said Dominic Cummings had done nothing wrong to demand police action is both hypocritical and dangerous. It means operational policing is being dragged into a political minefield.”

He said all the circumstances around Starmer were hugely different to those surrounding Boris Johnson’s law-breaking.

Barton said: “The only reason that those offences should be looked at in retrospect is if the people who made the laws, broke the laws. That is why it was crucial the gatherings in Westminster were investigated.”

He likened those demanding Starmer be investigated to malicious neighbours plaguing police with vexatious complaints: “All forces saw calls on neighbours increase during Covid from people using Covid as cover for longstanding disputes. That’s what this is.

“Just because someone is drinking beer does not mean it is a social gathering. There is no rule against alcohol.”

Starmer said the food had been ordered as the staff prepared an online event for members. “In Durham, all restaurants and pubs were closed, so takeaways really were the only way you could eat. So this was brought in and at various points people went through to the kitchen and had something to eat, and got on with their work,” he said.

He added: “We were very careful to abide by the rules … and we did it within my family. My wife’s father is very elderly and had to shield in difficult circumstances that I won’t go into. My wife went and sat on the pavement outside his house. All she wanted to do, like many families, is she wanted to go in and clean and she didn’t because the rules didn’t allow her. So I know what that feels like.”

Starmer has previously accused the Tories of “mudslinging” over their allegations that he broke Covid rules, in order to distract from the prime minister’s own lawbreaking, for which he was issued a fixed-penalty notice.

Johnson paid a fine for attending his birthday party in June 2020, and is still under investigation over his alleged attendance at several other parties.

A spokesperson for the Durham force earlier said: “Durham constabulary has reviewed video footage recorded in Durham on 30 April 2021. We do not believe an offence has been established in relation to the legislation and guidance in place at that time and will therefore take no further action in relation to this matter.”

The force subsequently confirmed it had received a large volume of correspondence on the matter and would respond in due course.
#Boris Johnson  #Johnson  #Covid
Add Comment