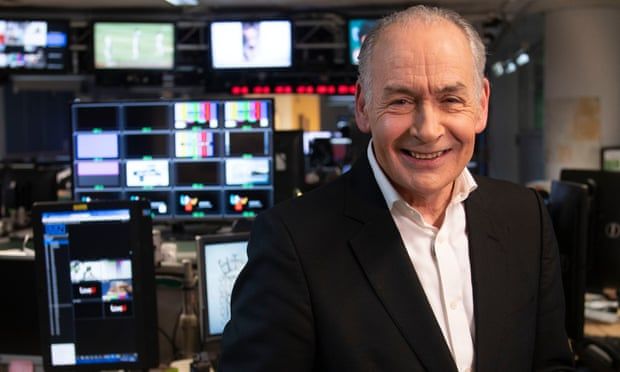 Broadcaster who was sacked over multiple ‘errors of judgment’ to host weekend show on rightwing station
The veteran newsreader Alastair Stewart has become the latest presenter to sign for the forthcoming GB News channel, as the new rightwing station prepares to launch later this year.

He will host a weekend news and current affairs programme, joining a growing number of well-known older male presenters who have joined GB News in recent weeks. The station is pitching itself towards disaffected viewers who feel television news currently skews to the left.

Stewart is a familiar face in the nation’s homes after his decades hosting bulletins for ITN, as well as reporting from around the world. However, his career came to an abrupt end last year after he was sacked from his role presenting occasional bulletins.

It was widely reported that Stewart was let go by ITN after he tweeted the phrase “angry ape” at a black political campaigner, but sources at the company insisted that his contract was terminated over multiple “errors of judgment”.

“It was never about a single tweet, it was always errors plural,” an ITN source said at the time.

However, this did not stop the individual who was the subject of Stewart’s comment from receiving a barrage of racist abuse from angry members of the public, who blamed the individual for taking Stewart off air.

Since leaving ITN Stewart has written articles for the Spectator and hosted programmes on TalkRadio. He said: “GB News is a unique opportunity to broaden the spectrum, challenge the groupthink and move away a predictable agenda in news and debate. I can’t wait to get stuck in and tackle issues that really matter to people across the United Kingdom.”

Other signings for the channel, which is pitching itself towards viewers outside major cities, include Andrew Neil, Sky’s Colin Brazier, and the BBC’s Simon McCoy. They join the likes of the ex-Apprentice winner Michelle Dewberry, the former Sky Sports News presenter Kirsty Gallacher and multiple former Brexit party candidates.

The channel has raised tens of millions of pounds in funding and has secured a slot on Freeview. Although it will be regulated by the media watchdog Ofcom, GB News’s presenters will be free to express political opinions and meet the standard of “due impartiality” so long as they expose viewers to alternative viewpoints.
Add Comment