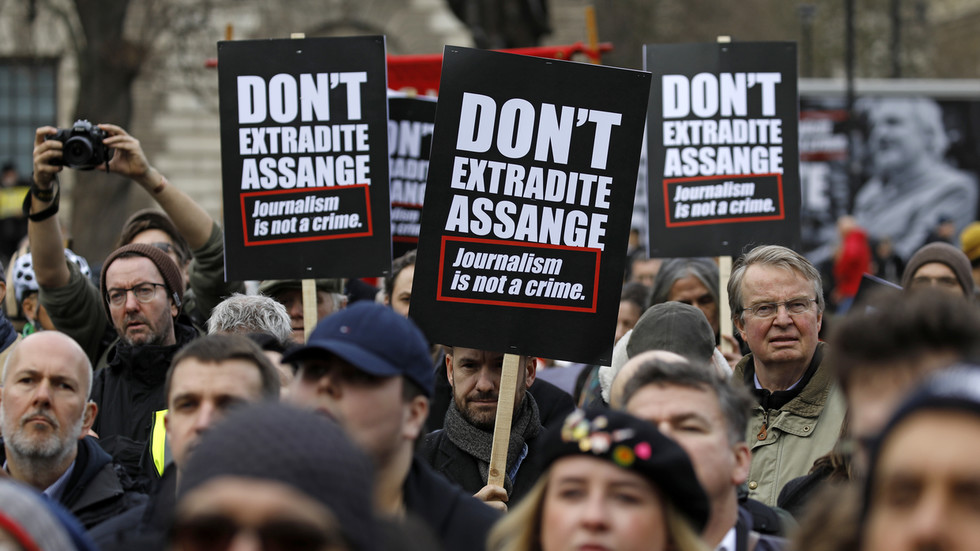 ‘First they came for Julian, next for you’: Waters, Westwood join massive London rally against Assange extradition (PHOTOS)

Thousands have protested near the British Parliament against WikiLeaks co-founder Julian Assange’s looming extradition to the US ahead of the hearing next week.

Demonstrators marched from Australia House to Parliament Square near the Palace of Westminster, where both houses of Parliament are located.

Chanting: “There’s only one decision – no extradition!” and “Free Julian Assange!” the demonstrators demanded the WikiLeaks co-founder not be handed over to the US. They say Assange was doing journalistic work and his prosecution is unlawful.

Some carried signs with photos of Assange and former US Army soldier Chelsea Manning, who provided WikiLeaks with footage purportedly showing US war crimes in Iraq and Afghanistan. The protesters also displayed photos of CIA whistleblower Edward Snowden, who exposed a mass surveillance program by US spy agencies.

The massive march for #Assange in London just started with @yanisvaroufakis @CraigMurrayOrg @rogerwaters @FollowWestwood @khrafnsson John Shipton and many others - it's not too late to join this epic struggle for Julian's freedom. The truth will not be silenced. pic.twitter.com/kJEr1KrEAk

Assange’s father Richard came out to show support for his son. He was flanked by WikiLeaks Editor-in-Chief Kristinn Hrafnsson, fashion designer Vivienne Westwood, and rock musician, Pink Floyd co-founder Roger Waters, who earlier slammed Assange’s trial as a “kangaroo court” and a “joke.”

Greek lawmaker and former Finance Minister Yanis Varoufakis told Ruptly that he joined the rally to remind the world about Assange’s role in shedding light on the illegal actions of governments.

Among the things WikiLeaks published over the years is a 2007 video showing a US chopper gunning down a group of civilians in Baghdad, including two reporters working for Reuters, after mistaking them for insurgents. Earlier this week, Assange supporters projected clips from the video on the Parliament building and the fence of the maximum-security Belmarsh prison in London, where Assange awaits his extradition trial.

The WikiLeaks co-founder could face up to 175 years in prison if found guilty of all 18 charges brought against him in the US. His extradition hearings are to start on Monday.