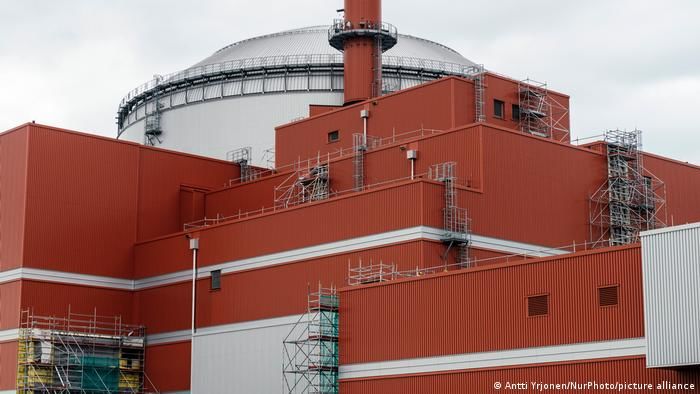 Nuclear reactor Olkiluoto 3 has gone online in Finland some 12 years behind schedule and on a massively inflated budget. Finland now hopes to cut back on energy imports from Russia, Sweden and Norway.

Finland's long-delayed Olkiluoto-3 nuclear reactor connected to the power grid for the first time on Saturday, the plant's operator said, 12 years after its planned launch.

Located on Finland's west coast, Olkiluoto-3 is the country's first new nuclear plant in over four decades and Europe's first in almost 15 years.

Why was Olkiluoto-3 delayed?

The 1.6 gigawatt (GW) reactor, built by the French-led Areva-Siemens consortium, had originally been due to open in 2009.

Using the third-generation European Pressurized Reactor (EPR) model, which was designed to improve safety and reduce costs, it was the first nuclear power station to be procured in Europe after the 1986 Chernobyl disaster.

Olkiluoto-3 was meant to be a showcase of French-German know-how, touted as offering higher power and better safety. But the project was plagued by technological problems and cost overruns.

The cost ballooned from an initial estimate of €3 billion ($3.27 billion) to around €11 billion, according to the 2019 World Nuclear Industry Report.

The Finnish Economy Ministry and the country's nuclear regulator said the project was beset by a string of technical and safety setbacks due to poor project management and workmanship.

The repeated delays led to bitter compensation disputes between the Finnish operator TVO and Areva, with the latter ultimately agreeing in March 2018 to pay TVO financial compensation of €450 million.

How will it help Finland's energy needs?

Over time, Olkiluoto-3 is expected to reduce the need for electricity imports from Russia, Sweden and Norway and lead to lower prices.

Once regular energy production ramps up in July, the reactor will supply about 14% of Finland's energy at 1,650 megawatts, TVO said.

Finland's net imports of power averaged 13 terawatt-hours (TWh) over the last few years, which should drop by around half by 2025 with Olkiluoto-3 in operation.

Is Europe set for a nuclear revival?

Nuclear power remains controversial in Europe, and the European Union's recent announcement that it plans to label it as green energy has won praise and criticism.

While countries such as Germany are phasing out their nuclear reactors, citing safety concerns, France, Britain and others are planning new nuclear projects.

Russia's invasion of Ukraine has also focused minds on how to reduce Europe's dependence on Russian energy and some politicians are highlighting nuclear as a self-sufficient, cheaper alternative.