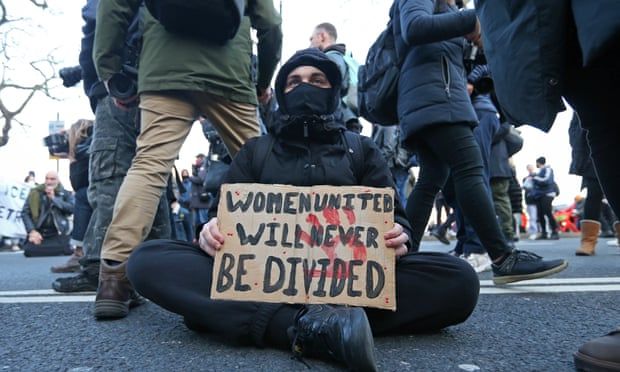 Demonstration marked one-year anniversary of vigil for Sarah Everard, which was broken up by police

Feminist-led protesters have set off 1,000 rape alarms and hurled them at Charing Cross police station to mark the first anniversary of the Clapham Common vigil for Sarah Everard which was broken up by police.

They were joined by Patsy Stevenson, whose arrest while being restrained face down by officers became the defining image of the vigil one year ago.

Charing Cross was at the centre of a misogyny and racism controversy last month when a report by the police watchdog revealed details of officers sharing messages about hitting and raping women, as well as the deaths of black babies and the Holocaust.

Amid the deafening shriek of hundreds of rape alarms, which littered the ground outside the police station, protesters chanted: “A-C-A-B: All cops are bastards.”

Olga Smith, a member of Sisters Uncut, said: “When we found out about Sarah’s disappearance at the hands of a serving cop, we asked the police, how will you keep us safe? And the police said: stay home. Stay hidden. Carry a rape alarm.

“When we refused to hide away, when we gathered in grief and anger at Clapham Common to mourn our sister, Sarah Everard, the police brutalised us.

“Today we say: police are the perpetrators. Police don’t keep us safe. That is why we have thrown our rape alarms back at the perpetrators in the infamous Charing Cross police station.”

This week, two judges ruled that the Met police breached the rights of the organisers of the planned vigil for Sarah Everard, the Reclaim These Streets group, who did not attend the vigil itself.

The backlash against officers’ behaviour at the vigil became a catalyst for the “kill the bill” movement, which has seen thousands of people protest about the introduction of expanded policing powers – particularly relating to protest – in the police, crime, sentencing and courts bill.

Protesters had gathered outside New Scotland Yard, on the Victoria Embankment, at 4.30pm, where they heard speeches from activists before a short march, led by activists carrying green and purple flares, past Trafalgar Square to Charing Cross police station.

Cassie Robinson, a 36-year-old from London who attended the protest, said: “I was there last year on Clapham Common, and the police’s behaviour was disgraceful. I’ve completely lost faith in the police to take violence against women seriously, and I participated in today’s protest because I am withdrawing my consent for violent men to have any authority in this society.”

Wayne Couzens, a serving Met police officer in an elite firearms unit, was convicted in September of the kidnap, rape and murder of Everard, who disappeared while walking home through the Clapham Park area of south London.

It emerged that he had used his warrant card and additional powers given to police during the coronavirus pandemic to trick Everard into his car.

Reclaim These Streets had to cancel their planned vigil for Everard after the Met said it would be illegal to stage a rally under lockdown restrictions. However, hundreds of people attended the unofficial gathering on Clapham Common.