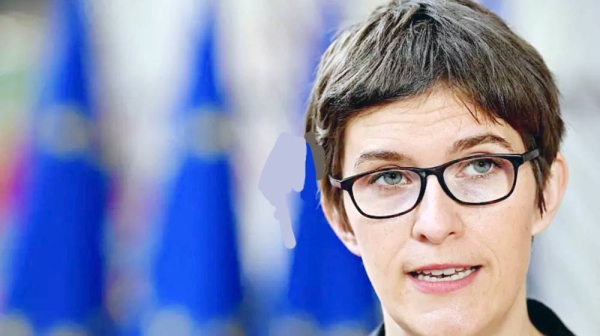 The European Union should be "very careful" about imposing a price cap on all gas imports entering the bloc, Anna Lührmann, Germany's minister of state for Europe, has warned.
The idea of an EU-wide gas cap has gained traction in recent weeks after prices broke new records in August and pushed electricity bills to unsustainable highs. Italy, Belgium, Greece, Sweden and Poland are among those backing the initiative, which is still in its early stages.

But Germany, the EU's largest economy and gas consumer, remains opposed, believing the measure could scare suppliers away and endanger the bloc's security of supply.

"The issue with the price cap is that: if you introduce a price cap, as the EU unilaterally, and all the other consumers around the world don't do it, then the gas will go to other consumers and thus we might have a shortage in gas supplies," Lührmann told Euronews in an interview.

"So, I think we should be very careful with these kinds of price caps and do everything we can to diversify our supply structure. That will also help to address the price issues."

Lührmann said that, instead of imposing a horizontal price cap on gas imports, the EU should engage directly with its main gas suppliers and negotiate lower prices.

"It would be important to discuss with individual gas suppliers, such as Norway, ways to reduce the price because they have a big interest in the European Union and the European market," the minister said.

"But overall, there's no alternative to actually finding the ways of how we can use energy more efficiently and how we can build up a sustainable energy system [based] mainly on renewable sources."

Norway, which this year replaced Russia as the EU's leading gas supplier, has said it is "skeptical" about a price cap but open to finding solutions. The country's trade surplus reached an all-time high of almost €20 billion in August, mostly due to soaring gas prices.

The European Commission is studying the measure's potential risks, including its impact on the liquefied natural gas (LNG) market, and has not yet tabled a formal proposal for ministers to discuss.

For the time being, the EU's emergency package will focus on three elements: electricity savings during peak hours, a cap on the excess revenues made by non-gas power plants (such as wind, solar and nuclear) and a windfall tax on the surplus profits reaped by fossil fuel companies.

The overall goal is to curb demand while raising extra money for governments.

"We can use those surpluses and give them back to consumers, to citizens, particularly those in need, so that we reduce the prices for them," Lührmann said.

The minister, who belongs to the Greens, said the new EU measures are a "very good" starting point but should be complemented by an extra effort at the national level to boost renewables.

"I'm quite convinced that if we follow them through," she said, "we [can] manage to get through this winter and also create conditions to make our economies sustainable without Russian energy supplies."

EU energy ministers are set to meet on Sept. 30 to debate and green light the emergency measures.
Add Comment