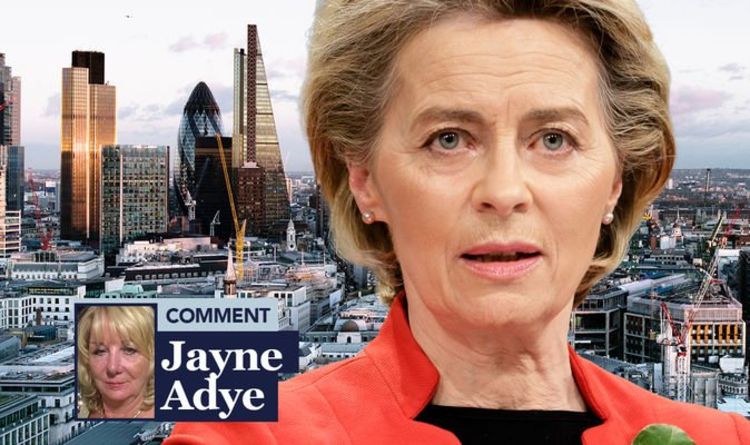 THE UK-EU Trade and Cooperation Agreement, which has now finally been passed into law by the European Parliament, with a majority of 650, has many faults which have been discussed at length.
However, the failure of the Agreement to include any settlement over the future of our successful Financial Services sector is seemingly the most overlooked issue. This lack of interest from the majority in the media, the Remain-biased snivelling Civil Service, as well as in Government, is largely why the EU has evidently bet on in its attempts to undermine the economic potential of the United Kingdom outside the European Union.

Just a few weeks ago - after years of negotiations - it was announced the United Kingdom had come to a ‘Memorandum of Understanding’ on Financial Services’ access to both the UK and the EU market.

However, while this may sound significant, in reality all this ‘Memorandum’ does is show both sides “…have agreed to talk about the issue further” in a set format. It brings zero change to the challenges faced by the UK’s Financial Services sector!

It must be said however, that a deal on Financial Services cannot come at any cost.

For example, French officials have already said they will seek to reject any deal on Financial Services if the UK does not give ground on the EU’s access to the UK’s waters for French fishing vessels.

This must not become an either/or scenario because our freedom and our Sovereignty is too precious to be surrendered as part of any deal.

As a nation we cannot succumb to these attempts to blackmail us into conceding our freedom and our Sovereignty.

The EU – and specifically French fishing vessels – rely almost entirely on securing their catch in the United Kingdom’s waters – to the detriment of our own fishermen all around our own coast who are suffering. The UK should hold all the leverage in these negotiations. It’s time the Government actually put it to good use.

As things stand in the financial sector the UK-EU Trade and Cooperation Agreement, and the Withdrawal Agreement which came before it, do not work in the interests of the UK.

We have let the EU get way with a trade deal in goods which overwhelmingly benefits EU Member States, while securing nothing for the Financial Services industry. This was a crucial failure in the negotiations, rooted in the mistakes made by the former ‘Remain’ Prime Minister, Theresa May.

As a country we should never have talked about any trade deal in goods in the first place unless the EU first agreed to grant permanent access to EU markets for the UK’s successful Financial Services sector.

The City of London - and the entire UK - are global leaders when it comes to financial services, and this will continue regardless of a deal with the failing EU.

What is the point of this deal we have signed up to, which so clearly benefits the EU far more than it benefits the UK? Surely if we cannot secure a preferential deal for our biggest industry - Financial Services, as well as including a deal which would help our own fishermen - then why are we allowing the EU easy access to our markets and our waters?

One thing Boris Johnson cannot do however, is continue to pretend Brexit is over and done with – as the PM seems to be doing at the moment.

If the UK let’s its guard down, we will pay the price in the future. The EU is clearly aware a truly independent United Kingdom - which is able to freely engage with the whole world - is a critical threat to its ongoing vision of an ever-closer federal union.
#Boris Johnson
Add Comment