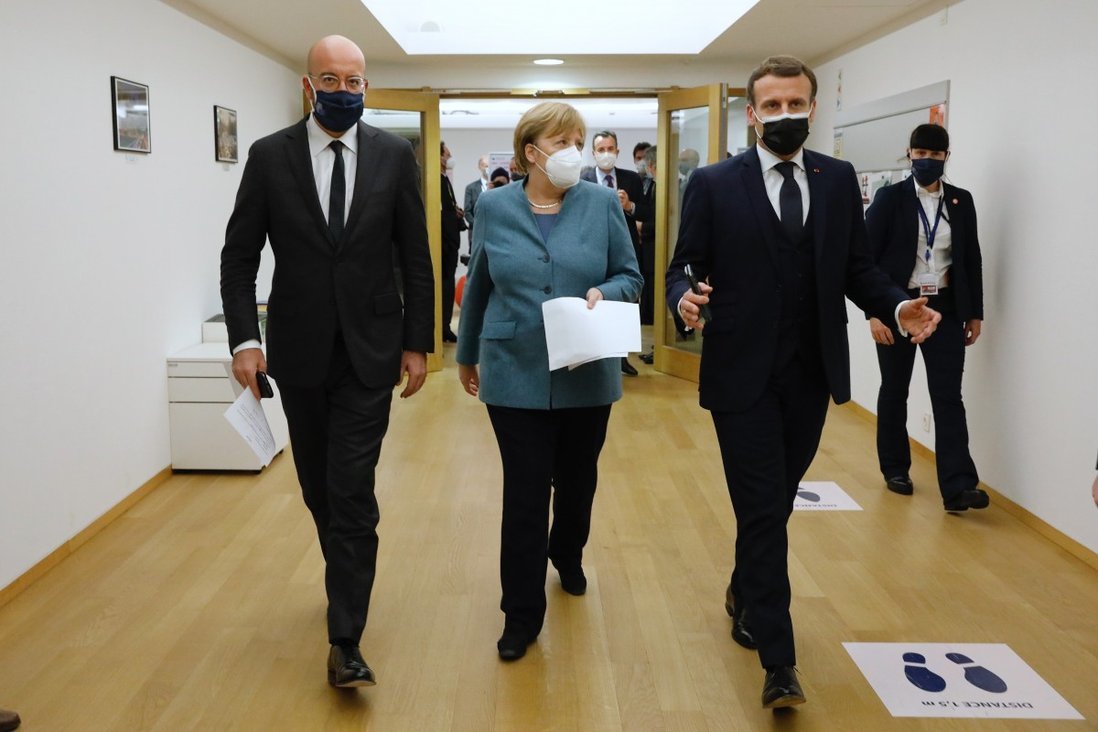 EU agrees ‘in principle’ to an investment agreement with China

German Chancellor Angela Merkel and French President Emmanuel Macron are understood to be in agreement for the investment deal with China to go ahead, said a source.

The European Union has agreed “in principle” to an investment agreement with China, a high-level diplomatic source in Brussels told the South China Morning Post on Thursday, in what would be a big win for Beijing in the face of tattered relations with the US. The EU’s two most influential leaders, German Chancellor Angela Merkel and French President Emmanuel Macron, are understood to be in agreement for the deal to go ahead, a second source briefed on the negotiation said.

Germany, which currently holds the presidency of the EU Council, announced that the investment agreement with China would be discussed among the 27 countries’ representatives to the bloc on Friday.

The politically symbolic move between China and the EU comes just a month before Joe Biden will become the US president, dealing a blow to his hope of reviving the transatlantic partnership in a bid to take on China’s growing assertiveness.

The European Commission, the executive arm of the EU that is in charge of trade talks, has secured breakthroughs as China agrees to open up its market in multiple sectors for EU businesses, the sources said.

China is understood to have made concessions on sectors like financial services, manufacturing and real estate.

In return, China secured the EU’s agreement to open up the renewable energy sector for Chinese investment, a clause that has drawn opposition from Eastern European member states including Poland and Lithuania, which rely on US support to deter the threat from Russia, the source said.

“It is also debated whether it is the right moment to sign a deal with China, given the incoming Joe Biden presidency that will likely focus on a transatlantic alliance to counter the rise of China,” the source said.

“But overall, it is agreed that the EU negotiators have achieved what the EU has been calling on China to do for seven years. China did make major concessions,” the source added. “That’s why the European Commission made the political decision in principle to conclude the talks of the agreement with China.”

Earlier on Thursday, the Chinese ambassador to the EU, Zhang Ming, told the Financial Times that the talks “are now in the final stage”. Referring to President Xi Jinping, he said: “It’s quite unusual for a Chinese head of state to give such … attention to an agreement under negotiation.”

A spokesman for the European Commission said: “The EU-China investment talks are intensive. Progress has been achieved in a number of areas. There are still some important outstanding matters and talks are continuing this week.

“The EU remains committed to the end of year deadline for conclusion of the negotiations, provided we have a deal worth having. We will not put speed over substance.”

Reinhard Bütikofer, who chairs the European Parliament’s China delegation, said of the possibility of an EU-China deal on Twitter: “It would be an interesting development, if EU would ignore concerns about forced labour in China and rush to conclude with China just before the Biden transition opens opportunities for better and stronger transatlantic cooperation on China.”

The diplomatic source, however, said that the deal with China would not affect the EU’s intention to build up a closer partnership with the US.

There are also suggestions that the EU-China investment agreement can be “fast-tracked” and will not need to be approved individually by the national parliaments of the member states, as is the practice for trade deals.