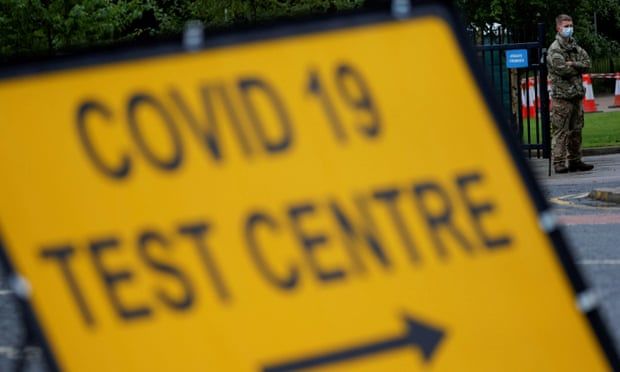 A “perfect storm” of low wages, cramped housing and failures of the £22bn test-and-trace scheme has led to “stubbornly high” coronavirus rates in England’s most deprived communities, an unpublished government report has found.

A classified analysis by the Joint Biosecurity Centre (JBC), produced last month, concluded that “unmet financial needs” meant people in poorer areas were less likely to be able to self-isolate because they could not afford to lose income.

In two of the UK’s worst-hit areas, Blackburn-with-Darwen and Leicester, the study found that more people seeking financial help to self-isolate had been rejected than accepted. It said: “This could increase the likelihood for individuals to be unable to comply with self-isolation requirements as a result of their unmet needs.”

The report, marked “Official Sensitive”, and seen by the Guardian, will pile pressure on ministers to improve government support for the millions of people who do not currently qualify when they are ordered by law to quarantine at home. Dido Harding, the head of NHS test and trace, has estimated that at least 20,000 people a day are not complying fully with isolation orders, allowing the virus to spread.

Senior Tory MPs including Jeremy Hunt, the former health secretary, have criticised the current £500 package, which is available to a limited number of low earners, as a “gaping hole” in ministers’ approach to the pandemic. In January, the Guardian revealed that ministers were considering paying everyone in England who tests positive for Covid £500, although no change has yet been announced.

On Tuesday deprivation and ethnicity were for the first time recognised as risk factors for severe Covid in new modelling, which led to 1.7 million more people in England being advised to shield and 800,000 being fast-tracked for vaccines.

The newly revealed analysis by the JBC, a government agency set up last May, concluded that “interconnected factors” such as deprivation, poor housing and work conditions, and delays in the test-and-trace system, were all “likely to be significant contributors” to the high coronavirus rates in some areas.

The government team examined six months of data relating to three of England’s coronavirus hotspots – Blackburn-with-Darwen, Bradford and Leicester – and compared them with three other areas with similar socioeconomic issues but lower case rates.

It found evidence that areas with a higher proportion of workers in public-facing roles, such as health and social care, taxi drivers or supermarket workers, were likely to experience high infection rates.

It said: “Having high numbers of people in high-risk occupation is not specific to just these enduring areas. This in isolation is not a reason for enduring transmission, but rather along with a range of other factors, overlaid, that create the ‘perfect storm’.”

It said that “existing socioeconomic inequality” had left black, Asian and minority ethnic communities at greater exposure to Covid-19 as they were more likely to live in cramped and multigenerational housing in deprived areas and hold public-facing jobs.

Despite this, the report noted: “Guidance around how to self-isolate safely in high-density housing does not appear to exist for England as it does for Scotland and Northern Ireland.”

The JBC report, which has been shared within Whitehall, also raised criticisms of test and trace, the government’s flagship scheme that has cost the UK more than five times the amount spent on vaccines to date.

It said there was “anecdotal insight” that locally led contact tracing had “proved to be more responsive and more effective because they understand the communities they live and work within and can meet their needs for communication, engagement and support more effectively”.

It also said contact-tracing data had not been given to local authorities quickly enough to contain outbreaks, adding: “There is evidence to suggest that line list data on CTAS [the daily details of every case in an area] has not been available to the local areas in sufficient time to consistently and effectively respond to contain transmission, trace contacts and respond to outbreaks.

“The delays of data passing between the NHS test and trace service and local authorities will have an impact on the ability to effectively manage and contain transmission in the population.”

It warned that delays with contact tracing “may impact transmission rates” and added: “In the enduring areas and most of the comparison areas this has improved as a result of the implementation of local contact tracing models.”

The report said there was no single cause for enduring Covid transmission “and therefore no silver bullet to resolve the issue”, adding: “Instead, it is likely to be due to a unique mix of factors in each location eg many of the factors are also interlinked and aligned: deprivation – employment – household composition.”

A government spokesperson said: “We do not comment on leaks. We recognise this is an incredibly difficult time for many people and we launched the test-and-trace support payment to help people who cannot work from home to self-isolate. We are working with England’s 314 local authorities to monitor the effectiveness of the scheme – including any impact on groups who may be ineligible for it.

“Local and national contact tracing teams are working in lockstep with NHS test and trace to break chains of transmission, and their efforts are paying off, with over 8 million people contacted and told to isolate by the 300 local contact tracing partnerships in operation.”