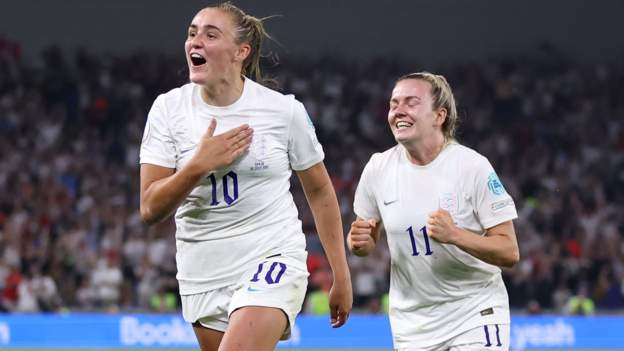 England are through to the semi-finals of the European Women's Championship after coming from behind in dramatic fashion to beat pre-tournament favourites Spain in extra time.

Georgia Stanway sent the Amex Stadium into delirium when she thumped in the winner after Sarina Wiegman's side had trailed up until the 84th minute of normal time.

A rendition of Football's Coming Home broke out in the stands as Stanway sprinted over to the corner to celebrate, with England leading for the first time after 95 minutes.

England had momentum on their side and capitalised as the crowd in Brighton were on their feet, while Spain continued to threaten until the final whistle.

Eventual victory for the hosts ensured they reached a fourth successive women's major tournament semi-finals and their impressive unbeaten run under Wiegman extends to 18 matches.

The Lionesses are now one of the leading favourites to lift the trophy for the first time at Wembley on 31 July, but they must overcome either Sweden or Belgium in the last four to get there.

Spain leave the tournament at the quarter-finals stage for the third successive time. 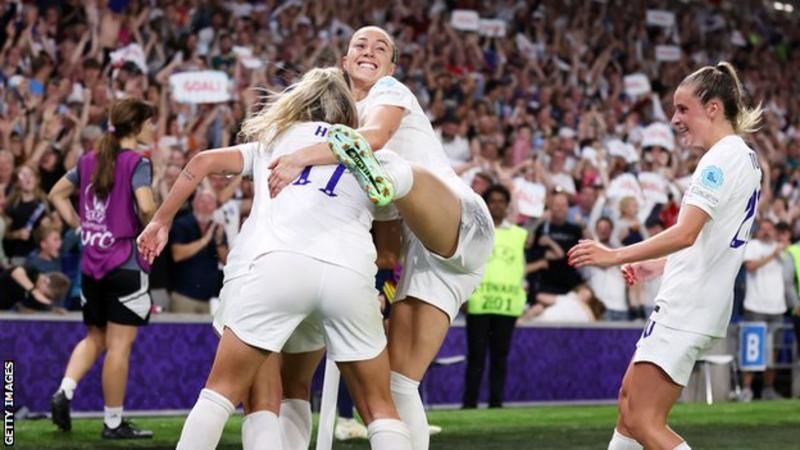 England's tournament had played to perfection leading into this match, with the Lionesses topping their group having not lost a game or conceded a single goal.

Their first real test came days before the quarter-final as manager Wiegman tested positive for Covid and only confirmed her return to the dugout three hours before kick-off.

The nerves were to be tested again though, as Spain showed their quality in the first half and dominated until deservedly opening the scoring nine minutes after the break.

Athenea del Castillo, on as a substitute, got the better of full-back Rachel Daly and set-up Gonzalez to fire into the bottom corner, silencing a stunned home crowd.

But Wiegman immediately responded with a triple change - introducing Manchester United duo Russo and Toone, as well as Manchester City winger Chloe Kelly - and it proved to be inspired.

They made a crucial impact as Kelly reignited energy, while Toone and Russo combined for the equaliser to take the game to extra time.

Stanway, who had been challenged by an impressive Spanish midfield for most of the match, saw space to exploit as she broke through the middle and did not hesitate before striking it powerfully into the top left corner for England's devastating winner.

A roar erupted inside the stadium - an apparent release of relief and adrenaline as supporters sensed this was the ultimate turning point in a game largely dominated by the visitors.

Spain continued to fight for an equaliser as Amaiur Sarriegi struck dangerously wide in extra time, but England held their nerve to keep their hopes of winning a first women's major tournament alive.

Emotions on show as drama unfolds 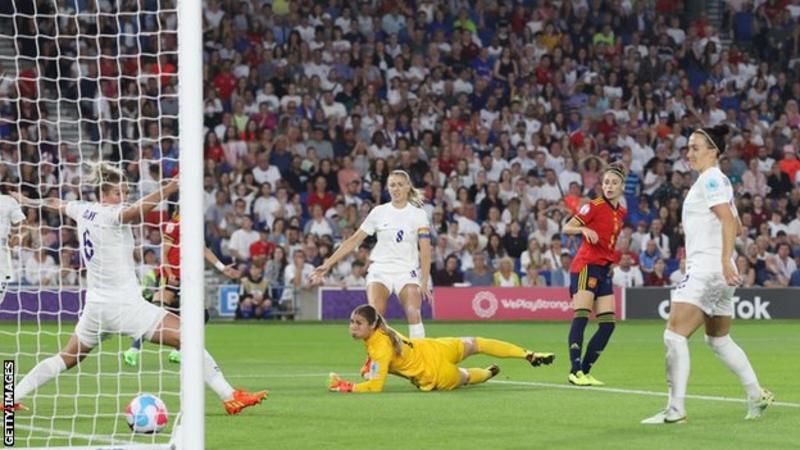 The significance of this victory was clear as England's bench ran on to the pitch at full-time to celebrate, while Wiegman turned to the TV camera with fists clenched and passionately shouted: "Come on!"

England are on a winning run and they are desperate for it to continue all the way to the final at Wembley.

The tournament has already delivered some memorable moments - one coming after England's 8-0 win over Norway on their last outing at the Amex Stadium - but this felt like a bigger outpouring of emotion.

England needed to show something they haven't had too many times before under Wiegman.

It was only the second time they had trailed in a match - the first coming against the Netherlands in June's warm-up friendly.

Spain's opener was the first goal England had conceded in this tournament and up until the 83rd minute it felt like they were about to lose for the first time under Wiegman.

But England's quality in depth off the bench was again invaluable as 22-year-old Toone crowned a stunning year for club and country by firing in the game-turning equaliser.

The players embraced arm-in-arm at full-time and danced to England's favourite tournament songs, before taking in a lap of honour.

The hosts once again demonstrated all the ingredients needed to win the tournament and they are two wins away from the ultimate prize.