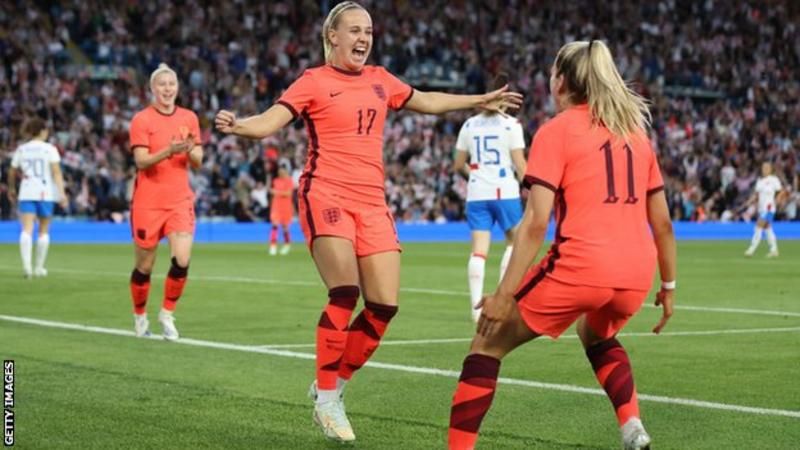 Substitutes Beth Mead and Ella Toone made an impact as they both got on the scoresheet in a one-sided second half.

The Dutch led through Lieke Martens' header before Lucy Bronze equalised to make it 1-1 at half-time.

Mead then struck moments after Dutch captain Sherida Spitse hit the post from the penalty spot, before Toone and Lauren Hemp doubled England's tally in the space of two minutes.

Arsenal winger Mead added a fifth goal late on to confirm a resounding victory in a statement performance from the Lionesses in Leeds.

England's victory, played in front of a vibrant crowd at Elland Road, extended their unbeaten run under manager Wiegman after she joined from the Netherlands in September.

They have just one friendly remaining - against Switzerland on 30 June - before opening the home Euros at Old Trafford against Austria on 6 July.

It was an entertaining match throughout as England were pressed intensely by the visitors in the first half and found themselves trailing when Martens' well-timed header caught out Mary Earps on a corner.

Bronze then looped a cross - intended for Beth England - inside the far post to ensure the teams were level at the break.

The Netherlands were awarded a penalty following a VAR review when Alex Greenwood brought down ex-Arsenal midfielder Danielle van de Donk but Spitse, making her 200th appearance, struck the post.

Within seconds, England went up the other end and Hemp curled it into the path for substitute Mead to direct home.

The crowd were on their feet and momentum was with England as they pushed to extend their advantage - Toone eventually curling in a third, before Hemp pounced on a rebound off the post to fire in a fourth.

It was a taste of the exciting football England are capable of producing at the Euros and the supporters who chanted "we want five" after Hemp's goal were given what they asked for when Mead fired in another in the dying moments.

Those leaving Elland Road will no doubt have come away feeling even more anticipation for the first game which is just 12 days away.

Wiegman, who led the Netherlands to the European title on home soil in 2017, said they would be England's biggest test in their friendlies before the tournament.

They proved to be hard to contain in the first half as Lineth Beerensteyn came close on two occasions and Martens was dangerous on the left.

But England bounced back well after Martens had given the visitors a 22nd-minute lead and went up another gear in the second half.

"We were struggling in the first half; the Netherlands were playing well," she said. "They got the penalty and didn't score, within a minute we scored, and then we sped up the levels of the game. The Netherlands had trouble with that and then we just kept scoring.

"Scoring within a minute was a gamechanger. We also showed against Belgium that this team has depth; we can make substitutions and get the game to the next level."

Toone and Mead were explosive and dynamic when they came on, striker Alessia Russo was constantly on the move inside the penalty area and Hemp's deliveries from the left were pin-point.

There was a party atmosphere at full-time as 19,365 fans celebrated with a rendition of 'Sweet Caroline', the waving flags and scarves a taste of what could come this summer. 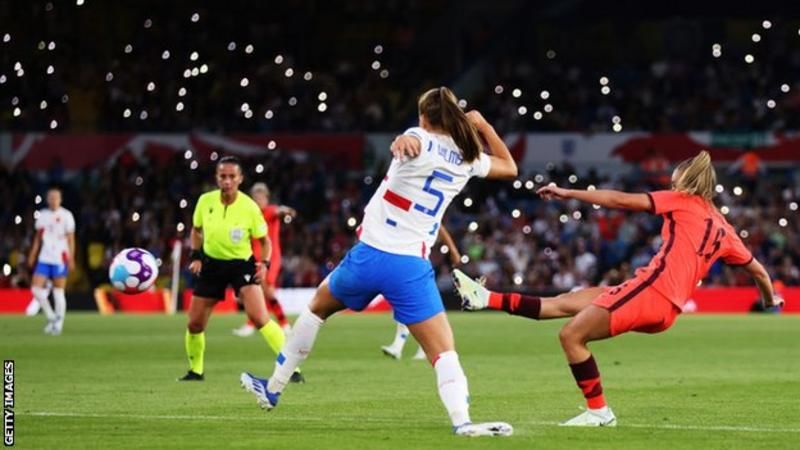 Wiegman still has some decisions to make over her team selection as the Euros draws nearer and the performances of Toone, Mead, Chloe Kelly and Fran Kirby have produced even more headaches.

Kirby was given the nod in midfield - with Wiegman opting for Georgia Stanway in the 3-0 win over Belgium - and the Chelsea star was bright and creative.

She linked up well with Kelly in particular in the first half but Wiegman's decision will not be easy as Kirby's replacement, Toone, stole the show in the second half.

The Manchester United youngster, who had appeared in every game under Wiegman prior to this month's friendlies, got on the scoresheet and it was her shot which struck the post leading to Hemp's goal.

On Toone and Mead's impact off the bench, Wiegman said: "They very energetic and you could tell they were having fun on the pitch. That comes into the rest of the team."

With both Toone and Kirby providing strong options, Wiegman admitted the midfield places were still up for grabs.

"Yeah that is, absolutely [a decision still]. We have so much quality. We were trying things out. We have one more game to try things out then we will be ready to go," said Wiegman.