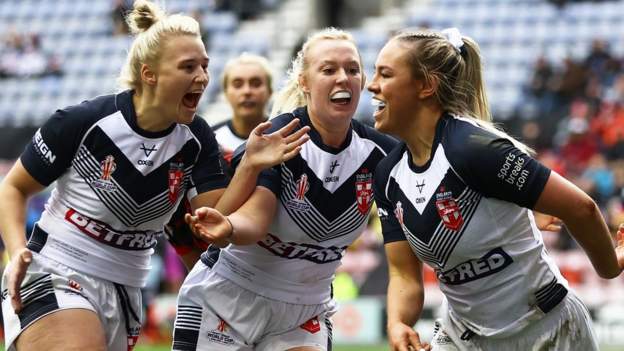 Hosts England are through to the World Cup semi-finals after a comprehensive 54-4 victory over Canada.

Papua New Guinea's 70-0 win over Brazil later on Saturday confirmed England and PNG will progress from Group A.

Craig Richards' England showed their class with 11 tries, as Tara Jane Stanley got a hat-trick and Hollie-Mae Dodd and Leah Burke both crossed twice.

Centre Petra Woods grabbed a second-half consolation try for Canada, who were beaten 34-12 by PNG in their first game.

England maintained their 100% winning start to the tournament after thrashing debutants Brazil 72-4 in their opener.

This was always going to be another one-sided affair in Wigan when Burke burrowed over in the corner after just 40 seconds, punishing a handling error by Canada immediately from kick-off.

Dodd snuck in twice, with Wilson scoring on home turf following a superb kick out wide by Courtney Winfield-Hill.

Full-back Goldthorp showed dancing feet for a delightful solo try, while Roche pumped her legs to break clear for a 30-0 half-time lead.

Stanley went over twice at the start of the second half, but Canada managed to get themselves on to the scoreboard when Woods dived in.

England extended their advantage when Roberts bundled over and York's Stanley completed her hat-trick, while Burke added to her early try for a comfortable victory.

In the later game in Hull, Belinda Gwasamun scored four tries and captain Elsie Albert was also among the scorers in a comfortable Papua New Guinea victory.

Tournament favourites Australia and New Zealand are likely to complete the women's semi-final line-up. Both play their second matches on Sunday: Australia face France and New Zealand take on the Cook Islands respectively.