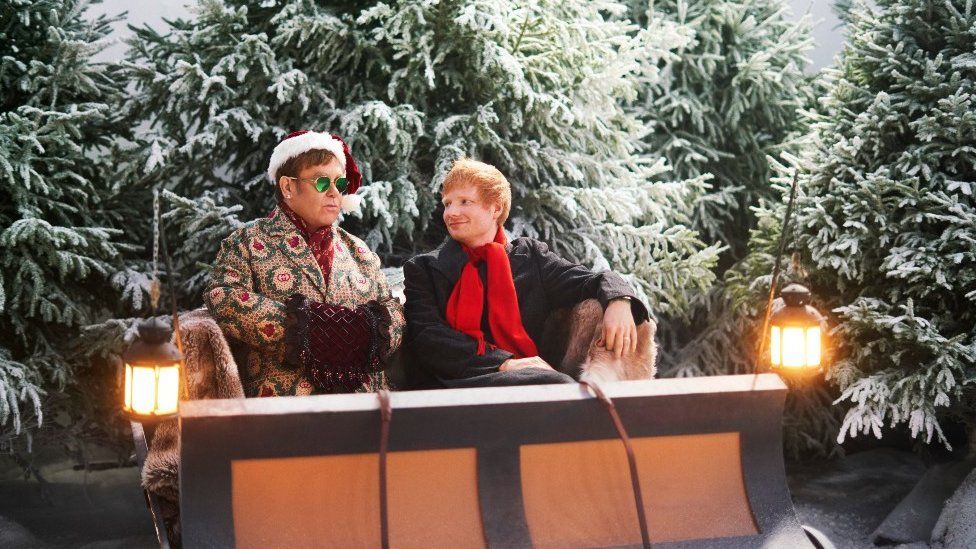 Ed Sheeran and Sir Elton John have unveiled the song they hope will become the UK Christmas number one this year.

Titled Merry Christmas, it's a bittersweet track that celebrates the season while remembering "the ones who have gone" in a painful year.

Complete with sleigh bells, ding-dongs and celestial choirs, it is one of three songs the stars wrote after Sir Elton pitched the idea last Christmas.

But the duo face stiff competition in the charts from Adele and LadBaby.

(Scroll down to read more about this year's contenders)

Sheeran already has one Christmas number one to his name with the Beyoncé duet, Perfect. Sir Elton's rollicking Step Into Christmas is also a festive staple, returning to the UK top 40 every year since 2017.

It was the continued success of that single that prompted the star to suggest a Christmas collaboration with Sheeran.

"He was so buzzed that Step Into Christmas gets a higher position each year," Sheeran told US chat show host Jimmy Fallon.

"So he's like, 'I want to do another Christmas song, do you want to do one with me?'"

However, Sheeran was initially cool on the idea.

"I've always been against it," he said. "Not that I don't like Christmas. I love Christmas. But in terms of doing a Christmas song, you need to chuck the kitchen sink at it."

In the end, the duo hurled more than a sink at the song. They chucked in the washing machine, the television, a sleigh full of Christmas bells, several terrified reindeer, five gooooold rings, four gallons of brandy butter, three packs of AA batteries, two sparkly pianos, and a partridge in a pear tree.

Their song contains every Christmas cliché you could imagine, from gathering around the tree to kissing under the mistletoe. And yet, it just works - sounding instantly familiar and refreshingly new at the same time.

Bookmakers William Hill have already made the duo favourites for the Christmas number one, with odds of 5-6.

Here's what the rest of the competition looks like.

Mariah Carey - All I Want For Christmas Is You

She's been asking for 27 years, but Mariah Carey still hasn't got you in her stockings (oh shush).

But what she does have is the chart equivalent of Coca-Cola's "Holidays are coming" jingle. Christmas only really starts when her tinselled tonsils appear on the radio.

There's too much competition for her to reach the summit this year, but she's all-but-guaranteed a top five finish 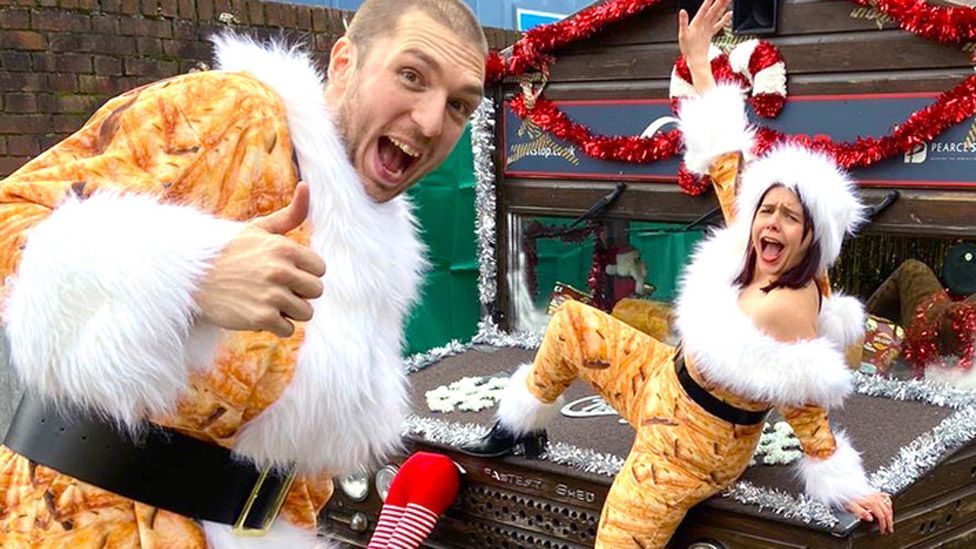 LadBaby has recorded all of his Christmas singles with his wife, Roxanne

Last year, LadBaby equalled a record set by the Beatles and the Spice Girls by scoring a third consecutive Christmas number one with Don't Stop Me Eatin' - a parody of Journey's soft rock classic Don't Stop Believin'.

The YouTube star's festive hits, which revolve around pastry-based puns, all raise money for the Trussell Trust food bank charity.

He's yet to confirm whether he'll go for a record-breaking fourth chart-topper, but the Sun recently reported that Ed Sheeran and Elton John had filmed a cameo for his upcoming video, dressed as sausage rolls.

If true, it suggests the duo are already prepared to concede the chart crown.

Earlier this year, Wigan band The Lathums beat Drake to number one with their debut album, How Beautiful Life Can Be. Now, they're hoping to score a similar upset on the Christmas charts with their festive offering, Krampus.

Technically an anti-Christmas song, it's set at the end of the world, with frontman Alex Moore singing: "Santa ain't coming this year / Your Christmas will be cancelled anyway."

Inspired by an episode of the BBC Two comedy series Inside No.9, the darkness of its lyrics are offset by a jangly Merseybeat shuffle.

If you like your Christmas pudding with a dose of salt, this is the one for you.

Gary Barlow & Sheridan Smith - How Christmas Is Supposed To Be

In 1993, Take That were robbed of the Christmas number one by Mr Blobby. Now, Gary Barlow has returned with a whole album of Christmas songs, titled The Dream Of Christmas.

The lead single is How Christmas Is Supposed To Be - a duet with Sheridan Smith, which finds them trading barbs ("I've given all I've got / You've given me nothing") as they decorate the Christmas tree.

It's no Fairytale of New York but your mum will like it.

Adele - Easy On Me

Adele's comeback single has been sitting atop the charts for the last six weeks, in the face of heavyweight competition from Ed Sheeran, Taylor Swift and Dua Lipa.

Easy On Me actually saw its sales increase last week, meaning Adele could easily cling to the top spot until the festive chart is revealed on Christmas Eve.

That said, her current sales figures of 100,627 are no match for the 157,733 singles LadBaby sold in Christmas week last year, so she isn't completely unassailable.

Amazon Music has been commissioning new Christmas songs for a couple of years now, adding them to their festive playlists and staging sneak attacks on Top 40.

The tactic has already produced a number one single, in Ellie Goulding's 2019 cover of Joni Mitchell's River. And this year, George Ezra has recorded a new version of Charles Brown's Come On Home For Christmas.

Recorded in September, while wearing a Santa outfit, Ezra said the song's message struck a chord after the tribulations of 2020.

"Last year was the first Christmas I've experienced where, completely out of anyone's control, we weren't able to see the people we would hope to see. I think that's something that resonated when choosing the song."

Until this year, Abba's only Christmas recording was a brief greeting on a Smash Hits flexidisc called Happy Christmas From The Stars, in 1982.

That all changed when they emerged from retirement in September to announce Voyage, their first album in 39 years.

Track three is Little Things, a gentle ode to waking up early on Christmas morning, in anticipation of the children opening their stockings.

Despite the presence of recorders, glockenspiels and a children's choir, Benny Andersson initially didn't consider the melody for a Christmas song, said co-writer Bjorn Ulvaeus.

"But the minute I heard it, I said it cannot be anything else. It is early, early Christmas morning. The stockings are hanging right there and then this couple wakes up."

Gypsy Pistoleros are basically the Flamenco version of Kiss - a sleazy glam rock band wearing Day of the Dead make-up.

Their bid for Christmas number one is a disappointing retread of Livin' La Vida Loca that trades the original's camp joie de vivre for dreary pub band clichés.

The song's most redeeming quality is that the proceeds go to housing and homeless charity Shelter.

An early publicity campaign helped it gain favourable odds at the bookmakers, but with the video only attracting 20,000 views in the course of a month, its ranking has slipped.

The story goes that "Pudsey himself set the challenge for the band, asking them to come up with a catchy Christmas single that will raise money for the appeal".

They plumped for a cover of Shakin' Stevens classic Merry Christmas Everyone. Shakey himself makes a cameo, after figuring out what's behind the green door (of his advent calendar).