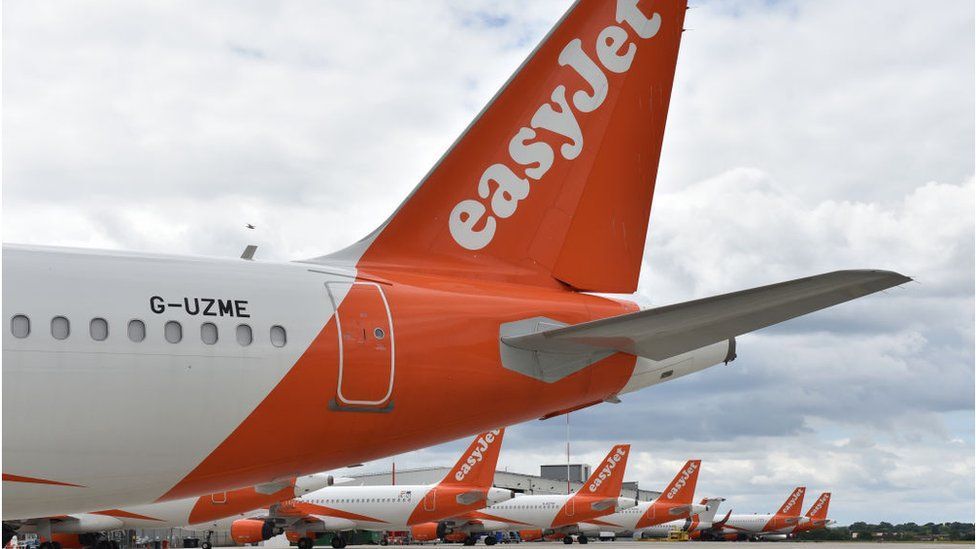 Easyjet said it had cut 80 flights on Sunday, and apologised to customers for the disruption.

Transport Secretary Grant Shapps told the BBC the aviation industry cut too many jobs during the coronavirus pandemic and it must not oversell flights.

He said he wanted airlines to automatically compensate passengers.

Passengers have faced a raft of UK flight cancellations causing disruptions for many families on half-term holidays.

Ten-year-old Noah and his younger sister Beau won't be in school on Monday morning after a cancelled Easyjet flight left their family stranded in Dalyan, Turkey.

Their mother, Emma, a hairdresser has had to cancel clients by text.

The family of six, including Emma's parents, spent 10 hours on Saturday night at the airport waiting to see if they would be able to fly out as planned, before finally being bussed back to the hotel at 4.30am. 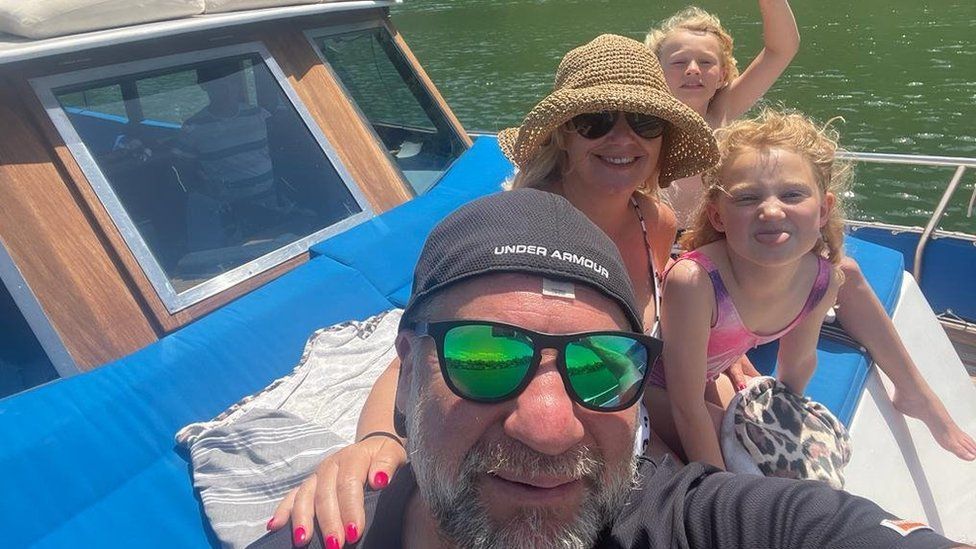 Scott and Emma have spent £3,000 on flights home, money they hope they'll be able to claim back

Easyjet offered them a flight on Thursday to Liverpool, but their car is parked at Gatwick.

"The [Easyjet] app literally says rearrange your flight or get a refund," says father Scott. "So we've just spend £3,000 on a flight home tomorrow night... flying to Stanstead."

Easyjet said it had cancelled about 80 flights on Sunday "due to the ongoing challenging operating environment".

"We are very sorry and fully understand the disruption this will have caused for our customers," the airline said, adding it was doing everything possible to get passengers to their destinations.

It said it had extended its customer service opening hours from 07:00 to 23:00, and was helping those affected find hotel accommodation.

Mr Shapps told BBC One's Sunday Morning programme that labour shortages were behind the travel disruption, resulting in airlines "finding it difficult to get people on board".

"When someone has bought a ticket for a flight, they've every right to expect that flight will take off, and not find that flight has been cancelled," he said.

"Airlines should be cautious about not overselling those flights, [and] where there are problems they need to fix them quickly."

He said the government had provided £8bn of support to the sector during the pandemic, along with furlough support, so decisions to cut staff had been made by the industry.

Mr Shapps added that airlines had "cut too deep" during the coronavirus pandemic.

"Clearly [the airlines] have been taken by surprise by the way in which people have returned to travel after two years of being locked down," he said.

He added that he wanted a "proper charter" for passengers so they could get "quick and straightforward compensation or be put on other flights".

Mr Shapps said he wanted a similar system to "Delay Repay" train passenger refunds "where it's an automated process".

However, he again rejected the idea of easing aviation labour shortages by relaxing immigration requirements.

Airlines have called on the government to issue special immigration visas to allow them to recruit overseas workers in the short term, as was done for the haulage and meat processing industries.

That idea was backed by London's Labour mayor Sadiq Khan who said airport jobs should be opened up to people from the European Union.

"This is self-inflicted from the government. This is about Brexit plus Covid."

"What we don't want is this spring misery turned into summer misery," he said.

However, Mr Shapps said after the government eased immigration rules in the haulage industry only 27 lorry drivers had come over from the European Union to help ease the chronic shortage, which instead had been alleviated by government measures.

Gatwick Airport said that 52 departures and 30 arrivals were cancelled on Sunday.

The majority were Easyjet flights, but British Airways, Wizz Air and Vueling were also affected.

Flights from Barcelona, Nice, Madrid, Belfast, Geneva, Corfu, Faro in Portugal and Glasgow were among those cancelled.

A Gatwick spokesperson said the airport was "operating normally" but would be busy with 830 flights.

Travel expert Simon Calder said that on a typical day you would expect to see half a dozen flights being cancelled to and from the UK, with those spread over all airlines.

He said in addition about 3,000 passengers heading for Luton on Sunday had been diverted after a power failure affected air traffic control systems.

Wizz Air issued a statement saying it was doing as much as it could to help passengers reach their destinations. It said several things were causing "operational instability" in the travel industry, including staff shortages within air traffic control, ground operations and baggage handling, security and across airports.

It offered customers affected its "sincere apologies" and said they would be offered alternative flights with Wizz Air, a full refund or 120% in airline credit, which it aimed to process within one week.