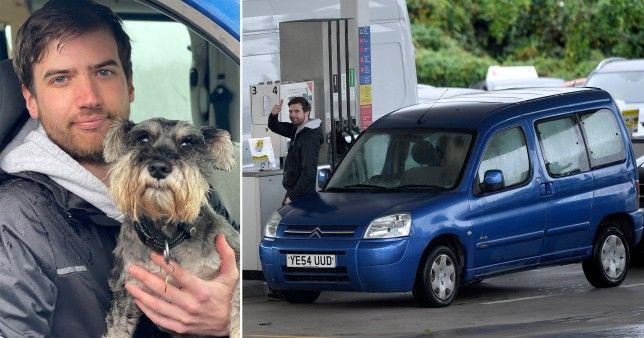 When Tom McCann loaded up the van this weekend and hit the open road, his heart was firmly set on spending the night in the idyllic Welsh countryside.

Instead, he wound up bedding down outside a rain-soaked Oldham petrol station.

The 30-year-old tried a dozen garages as he made his way from Wakefield to Wales for a week-long holiday.

By the time he’d got over the Pennines, his campervan was running on fumes but every station on his route had run dry because of panic buying.

Unable to get home or press on towards Wales, Tom and miniature schnauzer Arnie were forced to bed down outside a petrol station and hope a fuel delivery arrived the next morning.

Speaking from his less-than-picturesque pitching point the following morning, he said: ‘I thought somewhere along the way I’d manage to find some fuel.

‘But I must have tried 12 different petrol stations and couldn’t find any fuel anywhere.

‘So in the end I had to make the decision to stop overnight in Oldham because I’d saved enough to get to this fuel station this morning. 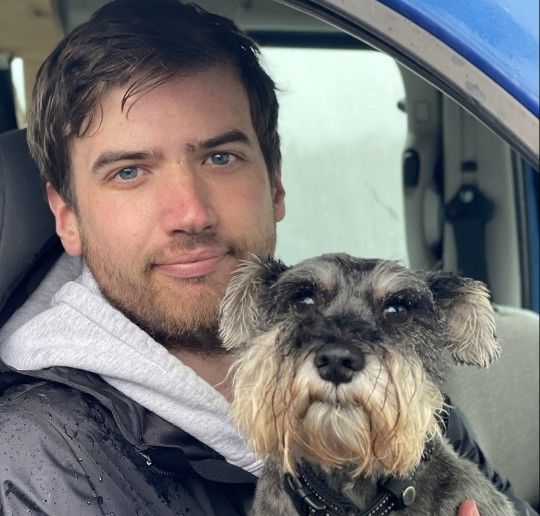 ‘I came about 5.30am and I’ve just had to wait for the delivery. I’m just waiting for them to fill up the diesel, then I’ll be on my way.

‘The tanker’s here now – the driver was really nice he came over and told me he’s got to take his break by law.

‘He’ll help me get on my way but I just appreciate him letting me know and for the fuel station for letting me wait it out.

‘I mean, I had no choice really. I don’t have enough fuel to get to another station anyway.’

‘Positive kind of guy’ Tom made the best of his first night on the road and managed to find a nearby park to stay in and get some sleep. 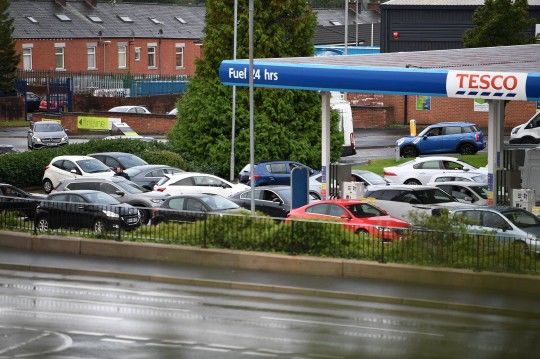 Like elsewhere in the country, the garage on Featherstall Road, Oldham, has had long queues of drivers outside it since the end of last week

He was eventually able to fill up at 10am the next day and get on his way.

Panic buying is continuing across the country despite government assurances that Britain has a good supply of fuel.

What began as a distribution problem impacting a small number of garages has turned into widespread shortages and queues as stations struggle to cope with demand.

The government is considering reserving pumps for critical workers and introducing purchasing limits if the hysteria continues.