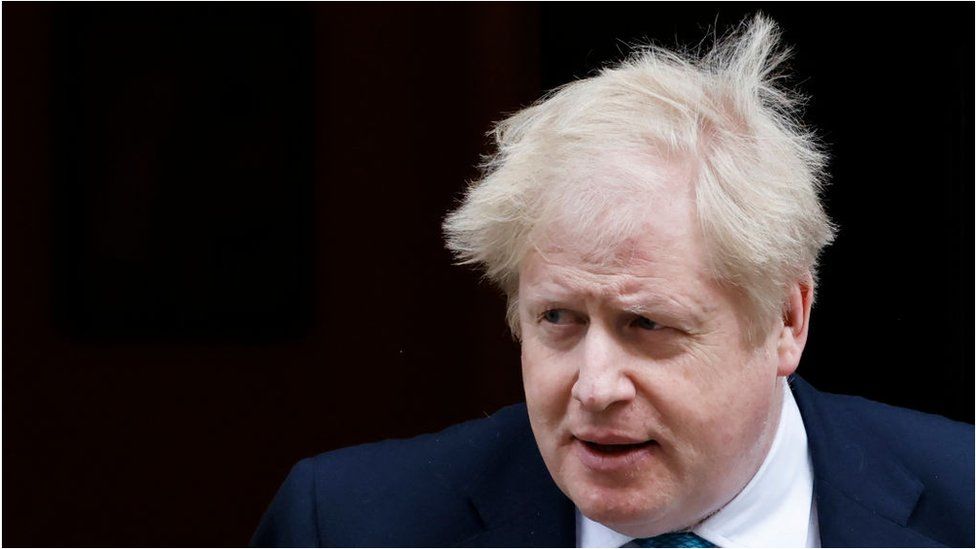 Doubt over PM claim that P&O sackings may be illegal

Doubts have been cast on a claim by Boris Johnson that the sudden sacking of 800 workers by P&O Ferries may have broken UK employment law.

The prime minister told the Commons the firm could face fines "running into millions of pounds" if found guilty.

But the Department for Transport later acknowledged that there had been a change in the law Mr Johnson quoted.

It came as the boss of P&O Ferries apologised for the mass sacking, saying he understood the "anger and shock".

The sackings - along with claims that workers paid as little as £1.81 an hour will replace the fired staff - have sparked outrage.

But P&O Ferries denies it broke the law and says workers are being fairly compensated.

At Prime Minister's Questions, Mr Johnson said: "Under section 194 of the trades union and labour relations act of 1992, it looks to me as though the company concerned has broken the law.

"And we will be taking action therefore, and we will be encouraging workers themselves to take action under the 1996 employment rights act."

According to Section 194 of the act, firms are meant to notify the Secretary of State before they sack 100 people or more.

However, the Department for Transport later confirmed that this law changed in 2018 due to the implementation of an EU directive. Chris Grayling was the Secretary of State for Transport from 2016 to 2019 when the change was made.

Firms no longer need to inform the UK government about mass dismissals but instead must tell the governments of the countries where boats are registered. 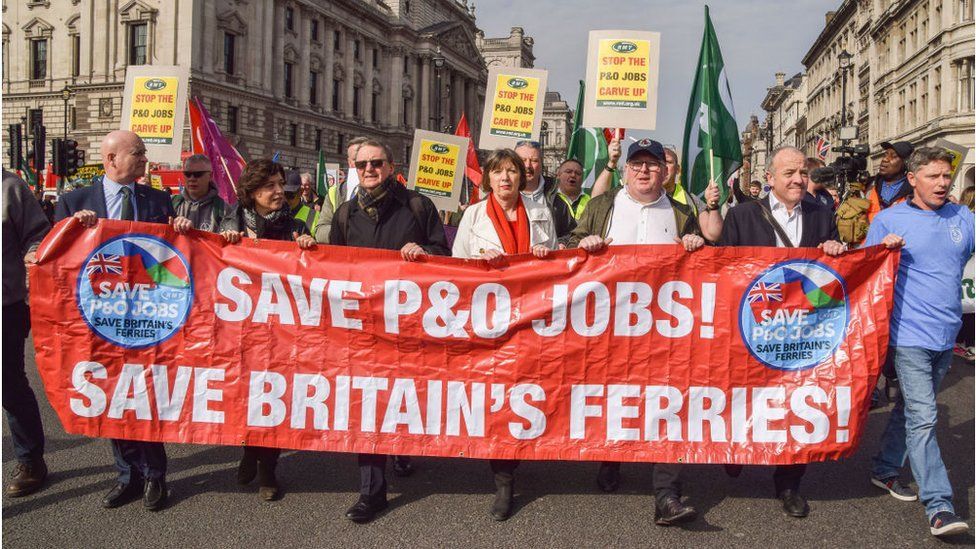 Protestors marched through London on Monday

Eight P&O Ferries ships are registered overseas in countries including Cyprus and The Bahamas.

"The government is strongly committed to protecting UK seafarers and those who work in UK waters continue to be protected by National Minimum Wage laws despite the 2018 legal change," a DfT spokesperson said.

Tim Tyndall, employment partner at Keystone Law, told the BBC he believed P&O had not broken the law.

"It would appear the government did not understand its own legislation when writing in the terms that it did to P&O."

However, he said there may be other grounds for arguing the dismissals were unlawful.

"The P&O employees are covered by UK employment law as P&O crew members worked out of Liverpool, Dover and Hull.

"The fact that P&O are offering settlement agreements suggests that they are aware of this and hope to avoid unfair dismissal and other claims by financial incentive."

Nautilus International, the trade union for maritime professionals, accused P&O Ferries of breaking UK law "because it did not notify the flag states of its decision to sack workers".

It said in 2018, the union had "succeeded in placing into UK law a requirement that an employer of seafarers, proposing to carry out large redundancy dismissals had to report this to the competent authority of the flag state".

"We believe the government must penalise P&O Ferries for their omission," said general secretary Mark Dickinson.

The BBC has approached P&O for comment following the union's claim.

"I want to say sorry to the people affected and their families for the impact it's had on them, and also to the 2,200 people who still work for P&O and will have been asked a lot of difficult questions about this," he said.

"Over the last week, I've been speaking face-to-face to seafarers and their partners. They've lost their jobs and there is anger and shock and I completely understand."

He added that the sackings were necessary to keep the loss-making firm afloat.

"This was an incredibly difficult decision that we wrestled with but once we knew it was the only way to save the business, we had to act," Mr Hebblethwaite said.

"I wish there was another way and I'm sorry."

It comes after reports that Indian agency workers paid as little as £1.81 an hour have already replaced sacked P&O workers at the Port of Dover.

Last week, P&O said the figure was inaccurate but said it could not comment on how much agencies pay workers on ferries.

Ministers have said such contracts are under review.

"DP World must be quaking in their boots," the Labour leader said. "The prime minister says how disappointed he is in them whilst handing them £50m."