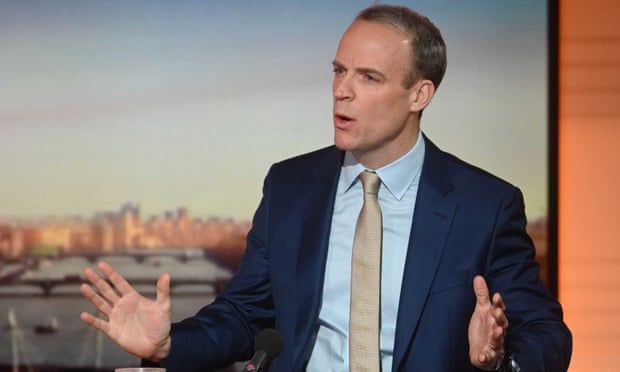 Deputy PM promises ‘full transparency’ but says it is for Boris Johnson to decide how much detail is released to the public
Dominic Raab has refused to confirm that the Sue Gray report on alleged Downing Street parties will be published in full, saying the amount of detail released publicly will be a matter for Boris Johnson.

The prime minister is braced for a critical week, with many Tory backbenchers reserving judgment on his future until they see Gray’s findings and how Johnson responds.

One former frontbencher said: “If he has been found out to have misled or covered up or anything like that, he’ll face a vote of no confidence.”

Another senior MP said: “I think most colleagues have largely made their minds up – both ways around. There may be some who want to see the content first to judge if they think they want to defend any of it, but there’s enough out there to have reached a conclusion. But it is right to see the whole picture before taking action.”

Several MPs have already called publicly for Johnson to resign, but it would take 54 letters from MPs to Sir Graham Brady, the chair of the 1922 Committee, to trigger a vote of no confidence.

In what appeared to be a scaling back of the government’s commitment to openness on the report, Raab, who is the justice secretary and deputy prime minister, promised there would be “full transparency” but declined to give any specifics.

Gray, the senior civil servant tasked with investigating claims of lockdown-breaking parties at Downing Street and elsewhere in government, is expected to publish the report in the coming week.

Asked whether the public would be able to see it in full, Raab told BBC One’s Sunday Morning programme: “Quite the way, the process for it, will be for the prime minister to decide. But … there will be full transparency. He has said he will come back to the Commons and make a statement, so there will be full scrutiny.”

Pressed on whether this meant it would be fully published, Raab said: “I’m not quite sure the shape and the form it will come, but the prime minister has been clear there will be full transparency around this, so that people can see. We would welcome that transparency and we need to learn the lessons.”

It has been reported that Gray’s investigation has been expanded to consider claims that Johnson and his wife, Carrie, held parties in their flat above 11 Downing Street. According to the Sunday Times, Gray is looking into whether visits to the flat during lockdown by government aides who are close friends with Carrie Johnson were necessary for work.

Raab declined to say whether Gray was looking into this, but did agree that Johnson would be expected to resign if he had misled parliament.

“The whole point of Sue Gray conducting this investigation is that she can look without fear or favour at whatever she wants to look at, and we avoid trial by media or the soap opera of things coming out without being substantiated,” Raab said when asked about the new claims.

“What I would say in relation to any of this is, if it’s significant, it’s important, Sue Gray should look at it.”

Pressed on whether Johnson would have to go if he lied to the Commons, he said: “The code of conduct for ministers is very clear, that if you mislead parliament it’s a resigning matter.” Several other cabinet ministers, including the chancellor, Rishi Sunak, have made the same point in recent days.

Speaking earlier, the former Labour prime minister Gordon Brown said it seemed unlikely that Johnson’s career would “end in anything other than scandal”.

“My fear is that scandal is going to follow Boris Johnson as long as he is prime minister,” Brown told Sky’s Trevor Phillips on Sunday.

“We don’t just have the scandal – and all the details will probably come out later this week about partying – we have the conflicts of interest, we have the dubious appointments, we have foreign money and question marks over that: who is paying the bills for what? And I don’t think we are going to see this administration end in anything other than scandal.”
#Boris Johnson  #Dominic Raab  #Johnson  #Raab
Add Comment