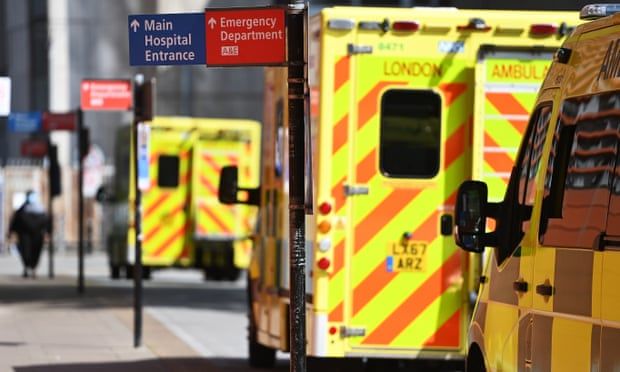 A senior intensive care registrar urges youths to get jab saying Covid patients are ‘getting younger and younger’
Increasing numbers of young people with coronavirus are being admitted to hospital – including to intensive care wards – doctors have said, begging them not to “suffer unnecessarily” and to get the vaccine.

During the first weekend after the majority of Covid restrictions were lifted in England there were pictures of crowded nightclubs, filled with revellers not wearing masks or social distancing. Medics raised the alarm that unvaccinated young people urgently needed to protect themselves against infection to avoid serious illness.

The warning came as scientists gave a cautious welcome to the fifth day in a row of falling Covid case rates – the first time that cases have seen a sustained fall without a national lockdown. These figures, however, do not include the impact of 19 July’s easing of restrictions.

The UK recorded 29,173 new cases on Sunday, down from 48,161 the week before. But NHS England said one-third of 18- to 29-year-olds had still not had at least one dose of the vaccine – a figure that falls to one in 10 for the whole adult population.

While young people are generally at a much lower risk of dying from Covid, doctors say they are increasingly witnessing them become severely unwell. Dr Samantha Batt-Rawden, senior intensive care registrar, said the patients they were seeing were “getting younger and younger”.

“The vast majority of those requiring intensive care are unvaccinated: some of them will die. It is heartbreaking for us as NHS staff to watch people suffer unnecessarily knowing that this almost certainly could have been prevented by the vaccine,” she said.

“We are seeing patients in their 30s, or even in their 20s, who are fit and have no other medical problems on ICUs [intensive care units]. As an ICU doctor I am begging you to have the vaccine. Please don’t let not having the jab become the biggest mistake of your life.”

Prof Adam Finn, a member of the Joint Committee on Vaccination and Immunisation and from the University of Bristol, said there had been close to 200 admissions, with a mean age of 40, in the city during the Delta variant wave.

Speaking on LBC on Sunday, he said: “We have had people under 30 on our intensive care unit and also requiring high-level oxygen therapy. This is not always trivial in young adults. There are younger people really getting seriously ill at the moment, so that’s one good reason to think about having the vaccine.

“But the other one is, these vaccines now – it’s clear – do reduce the risk of not only getting the infection but passing it on to other people.”

The latest data from the Office for National Statistics shows that coronavirus in England is now largely an infection among young adults, with cases in 16- to 24-year-olds almost six times more common than in 50- to 69-year-olds.

Many experts had urged the government to postpone the easing of restrictions to allow more adults to get both Covid doses. On Friday, Prof Robert West, a health psychologist at University College London and scientific adviser to the government, accused ministers of allowing infections to rip through the younger population in an effort to bolster levels of immunity before the NHS faces winter pressures.

Dr Adrian Boyle, vice-president of the Royal College of Emergency Medicine, said it was critical young people got vaccinated. He said that while young people getting ill with coronavirus was rare, “suddenly there’s quite a lot of them just because there’s so much Covid around”.

Saffron Cordery, the deputy chief executive of NHS Providers, which represents hospital trusts, said members were reporting “a much higher proportion of younger patients, under 40”.

Cordery also warned of the risk of long Covid. Government data published last month suggested more than 2 million adults in England have experienced coronavirus symptoms lasting more than 12 weeks, although the risk was found to rise with age. “It is important that everyone – whatever their age – understands the risks of remaining unvaccinated,” she said.

Dr Kaveri Jalundhwala, co-chair of Doctors’ Association UK, a campaigning and lobbying group, also highlighted the risk of long Covid, having experienced the condition herself. “Even if only 5% of people are getting long Covid, that’s going to be a huge number of people having a very debilitating condition that might last for a year or longer,” she said.

“It’s more debilitating than people realise. People can’t do their normal jobs any more, they can’t do normal activities, people struggle to walk or do any kind of exercise. We absolutely recommend everybody to get both vaccines as soon as possible, especially with the Delta variant just everywhere at the moment.”

The shadow health secretary, Jonathan Ashworth, described levels of infection among young people as alarming, saying: “Ministers must do more to promote vaccination, ensure young people have time off to get jabbed and open more pop-up vaccination clinics targeted at young people.”

The impact of Covid, and particularly the Delta variant, on young people is also of increasing concern in other countries. In the Netherlands, curbs on bars, restaurants and nightclubs were reimposed after new cases rose sevenfold.

In Australia, the Nobel prize-winning immunologist, Peter Doherty, said on Sunday: “Young people are at considerable risk and at higher risk than with the earlier variants of Covid. Young people shouldn’t think they’re at no risk or even minimal risks. Because it’s going to kill.”

The government’s proposed introduction of vaccine passports has caused significant backlash among Conservative MPs and it is unclear whether the government will be able to assemble a majority behind it.

Ministers are currently considering whether to make them mandatory for Premier League football matches and other events with more than 20,0000 attenders, having already announced their introduction for nightclub entry and “other venues where large crowds gather”.

Finn suggested the move could backfire and a more gentle approach was needed.

“If people begin to feel they are being kind of forced against their will to do something, then in a sense that’s quite a damaging thing to do because it gives people the impression [that] vaccination is something being imposed on them from outside,” he said.

A Department of Health and Social Care spokesperson said: “We have one of the highest Covid-19 vaccine uptake rates in the world. The latest ONS (Office for National Statistics) data shows 90% of adults under 30 have said they would come forward for a vaccine and three in five adults aged 18-24 have already received one dose in England.

“We have worked closely with the NHS to provide information at every opportunity on how to get a vaccine and its benefits – including partnerships with high-profile celebrities, social media platforms, and dating apps to encourage uptake among younger age groups.

“We are continuing to do everything we can to boost uptake for younger people and urge all those who have yet to book their appointment to do so as quickly as possible to help protect themselves and their loved ones.”
#Coronavirus  #Vaccines  #COVID-19  #vaccine  #Covid
Add Comment