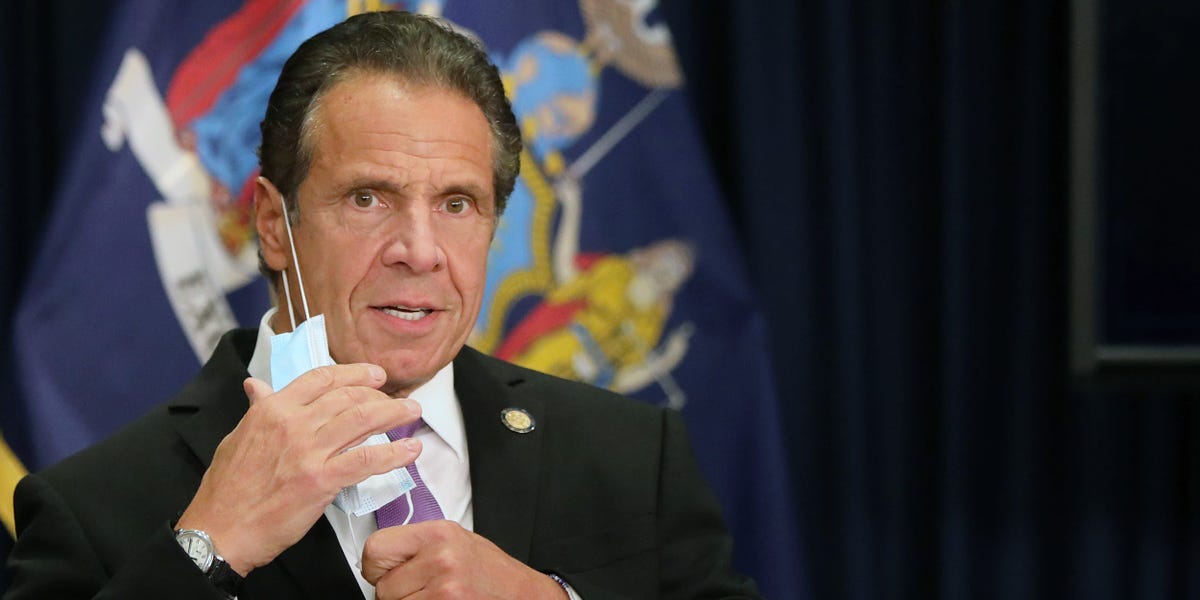 The latest accuser, Alyssa McGrath, listed her position as an executive assistant to Cuomo before her LinkedIn page was taken down.
A ninth woman has come forward to accuse New York Gov. Andrew Cuomo of sexual harassment, the New York Times reported Friday afternoon.

The woman, Alyssa McGrath, is a current employee in the governor's office, according to The Times. Her position was listed as an executive assistant before her LinkedIn page was taken down.

She is the first current aide to speak publicly about allegations against the governor.

Many of McGrath's recollections of Cuomo's behavior closely resemble allegations made by other women, including former aides.

McGrath described how Cuomo would "ogle her body, remark on her looks, and make suggestive comments to her and another executive aide," per The Times.

McGrath's account echoes those of both other accusers and former Cuomo aides who told outlets including The Times, New York Magazine, and the Washington Post, that Cuomo cultivated a toxic and hostile work environment where female employees were demeaned, reduced down to their appearances, and pitted against each other in competition.

McGrath also said that over the course of several years, Cuomo "fostered an unusual work triangle with her and her friend," another current Cuomo staffer who has accused Cuomo of aggressively groping her at the governor's mansion in the most serious allegation to be raised against the governor.

McGrath said that her colleague who filed the complaint accusing Cuomo of groping — whose name has not been publicly released — divulged the details of the incident to her after it was first reported in the press. McGrath told The Times the woman said that Cuomo had told her not to tell anyone else about it, and especially not McGrath.

"She froze when he started doing that stuff to her," McGrath told The Times.

Emails reviewed by The Times showed that McGrath and the other woman were frequently asked to come to perform tasks at the governor's mansion, where the unnamed woman said Cuomo groped her when they were alone.

In 2020, McGrath said, Cuomo asked her and her colleague if they were going to "mingle" with single men on a trip to Florida, calling them "mingle mamas" for the rest of the day.

McGrath also said that Cuomo held and gripped her and her colleagues' waists while posing for photos, and also once kissed her on the forehead.

Cuomo lawyer Rita Galvin told The Times, in response to McGrath's claims, that "the governor has greeted men and women with hugs and a kiss on the cheek, forehead, or hand. Yes, he has posed for photographs with his arm around them. Yes, he uses Italian phrases like 'ciao bella.'"

"None of this is remarkable, although it may be old-fashioned. He has made clear that he has never made inappropriate advances or inappropriately touched anyone," she added.

In addition to McGrath and her colleague who filed the complaint accusing Cuomo of groping her, former Cuomo aides Lindsey Boylan, Charlotte Bennett, and Ana Liss, have accused Cuomo of harassing them and making inappropriate sexual advances as governor.

Karen Hinton, who consulted for the Department of Housing & Urban Development, then led by Cuomo under the Clinton administration, also told the Post he made inappropriate advances towards her in 2000.

Cuomo, so far, has denied the harassment allegations against him and remained defiant in the face of calls for his resignation.

"It makes me really upset to hear him speak about this and completely deny all allegations," McGrath told The Times. "And I have no doubt in my mind that all of these accusers are telling the truth."
Add Comment