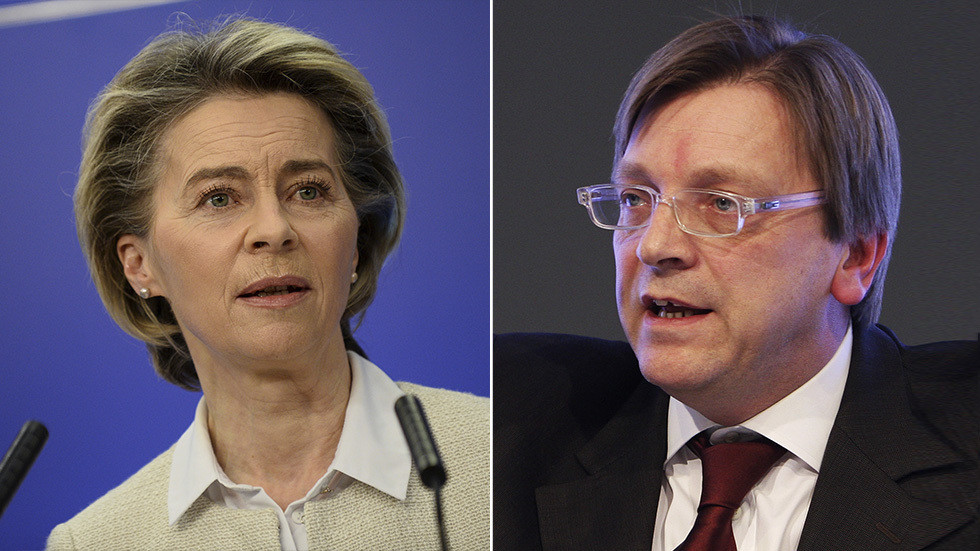 Crisis looms for the EU as Covid, Brexit, borders and Russia expose poor leadership and major rifts at the heart of the bloc

The European Union is in a tailspin as member states ignore diktats on common action over the coronavirus, a senior figure accuses boss Ursula von der Leyen of wrecking UK ties, and MEPs call on the foreign policy chief to quit.

Former Belgian Prime Minister Guy Verhofstadt has had quite a second life as a rabid arch-federalist in the European Parliament, and he revelled in frequently displaying his contempt for British politicians as they navigated the choppy waters of Brexit.

But now, Verhofstadt is among a number of leading politicians to savage European Commission President Ursula von der Leyen over missteps in recent weeks.

That move, said the European Parliament’s former Brexit negotiator, “destroyed in a few seconds the seriousness of the negotiations with the UK conducted by Michel Barnier for more than three years.”

This expression of disappointment will be a surprise to many. After all, the British media does not have a high opinion of the man. Following some of his more contentious claims, such that Britain would be a “dwarf” on the international stage once it left the EU, the Sun newspaper went on the attack with, “No more repugnant figure struts the corridors of Brussels than the curtain-haired slimeball Guy Verhofstadt. Try as they might, even the drunk [Jean-Claude] Juncker or the peacock Barnier cannot match the Belgian’s detestable blabber-mouthed arrogance.”

And here he is, now sticking up for Britain.

For Verhofstadt to break ranks like this with von der Leyen and the Commission, something is seriously wrong in Brussels. And the president is not the only senior figure having a rough ride, as some member states, furious at the mishandling of the coronavirus vaccines, use the crisis to chip away at the fundamental belief that all 27 members must act unilaterally.

Leading light Germany is the most senior bloc member to put its foot down. Despite calls from the European Parliament to prevent completion of the Nord Stream 2 gas pipeline backed by the threat of sanctions from the USA, Chancellor Angela Merkel signalled work on the Russian Gazprom project to recommence this week, ignoring the clamour.

In a further move to irritate Brussels, the Germans also decided to temporarily close their borders with Austria and the Czech Republic to stem the spread of mutant variants of the coronavirus without bothering to notify the Commission. This caused immediate alarm for the more than 20,000 Czech workers who cross into Germany every day and undermined one of the key principles of the European Union – freedom of movement.

When the Commission announced that it expected Berlin to follow an earlier agreement on a common approach to travel restrictions to avoid border closures and blanket travel bans, it was told in no uncertain terms to pull its head in. German Interior minister Horst Seehofer retorted, “The Commission should support us and not put spokes in our wheels with cheap advice.”

That’s them told. And this time it’s not the usual suspects, Hungary or Poland, ostentatiously ignoring Brussels over minor infringements of ‘European values’, it’s Germany forging its own path. Time to sit up and take notice.

Berlin’s actions are starting to embolden others as Estonian MEP Riho Terras won the support of 50 MEPs to sign and send a letter to von der Leyen demanding the head of the EU foreign affairs chief Josep Borell after his recent humiliating trip to Moscow, where his Russian counterpart ran rings around him, dismissing the EU as an “unreliable partner.”

This sort of reaction is generally unheard of in the subservient European Parliament, and it’s a clear indication that the cracks are widening in this ever-closer union edifice, not just over the handling of the coronavirus pandemic, but on broader issues as well.

Unless the struggling von der Leyen, who is out of her depth, can manage to turn things around quickly, it is hard to see her lasting the distance after just a year in the top job.

The former German defence minister was never a hugely popular choice for Europe’s top role so maybe that will make her departure less traumatic. But the damage has been done and it’s time to move on.