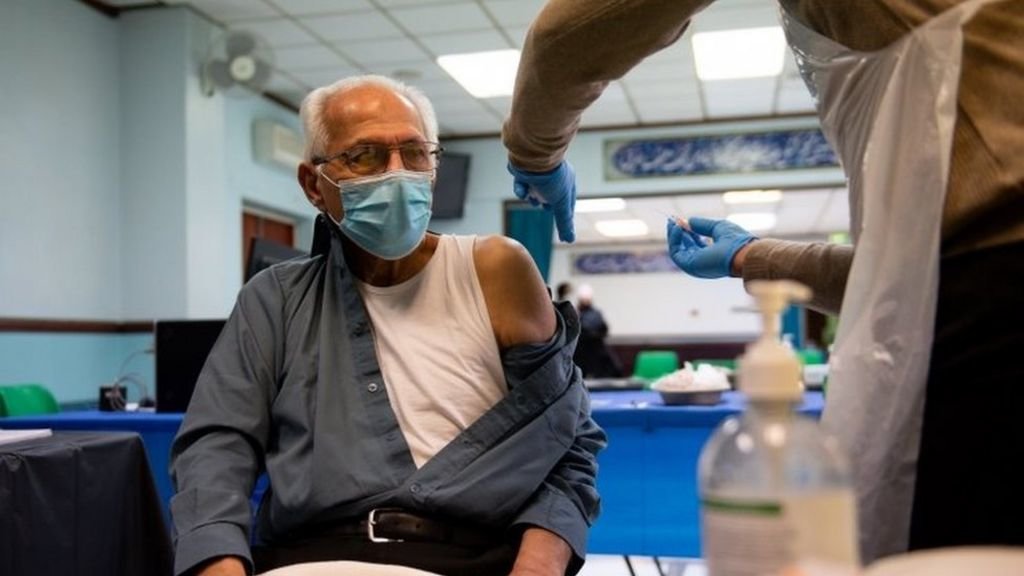 Once the four priority groups have been vaccinated, by mid-February, "we'll look then at how we're doing," he said.

Nearly two million people in the UK have had their first dose of vaccine in the past week, government figures show.

Scientist Marc Baguelin, who advises the government, has said restaurants and bars should not reopen before May.

Education Secretary Gavin Williamson has said he "certainly hopes" schools in England can fully reopen before Easter, while Downing Street refused to be drawn on whether this would happen by then.

A further 1,290 people have died within 28 days of a positive Covid test and there have been another 37,892 cases, according to the latest government figures.

And almost five million people in the UK have had their first dose of a coronavirus vaccine.
Speaking after a study suggested infections might have increased at the start of the latest lockdown in England, Mr Johnson said it was "absolutely crucial" that people observed the restrictions.

Referring to figures from the Imperial College London survey, he said they showed the new variant of the virus was "not more deadly but it is much more contagious and the numbers are very great".

Figures published by Public Health England show cases - meaning people who come forward to get tested while they are infected - have fallen across England since early January.

With the two sets of figures pointing in different directions, it will be some time before it is known for sure how long it will take for lockdown to relieve the pressure on hospitals. 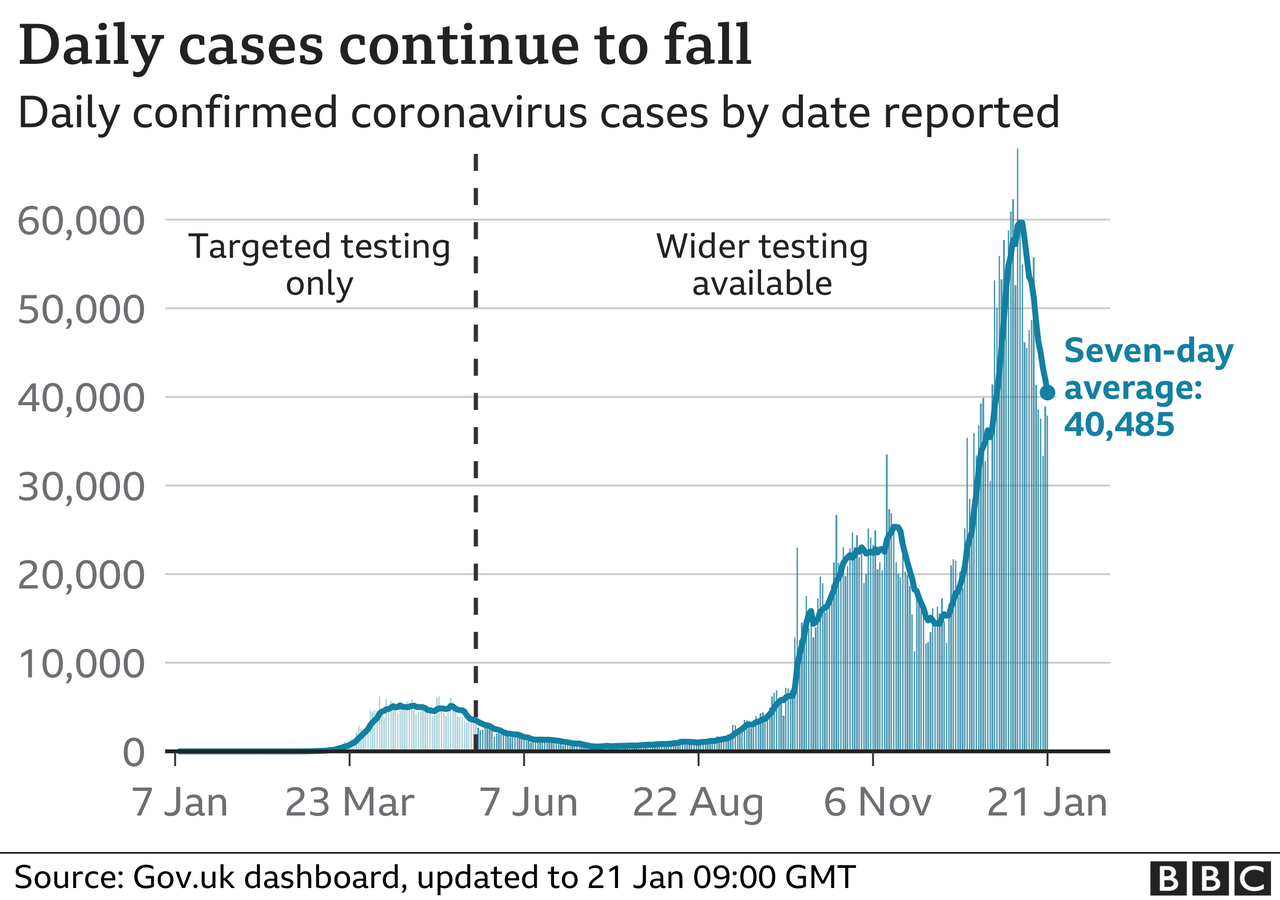 Dr Baguelin, from Imperial College, who sits on a sub-group of the Scientific Advisory Group for Emergencies (Sage) said the premature opening of the hospitality sector would lead to a "bump" in Covid-19 cases.

He told BBC Radio 4's World at One programme even a partial reopening would generate "an increase in the R number". An R number above one means the epidemic is growing.

"Something of this scale, if it was to happen earlier than May, would generate a bump in transmission, which is already really bad," he said.

"So you have a lot of pressure on hospitals, you will have another wave of some extent. At best you will keep on having very, very unsustainable level of pressure on the NHS."

This is a debate that is going to start to dominate public discourse.

With the vaccination programme under way, there is huge clamour to know what will happen once the most vulnerable are vaccinated, by mid-February.

The problem is there are still so many unknowns.

Firstly, it is hard to predict by how much lockdown will have reduced infection levels, considering there is a new faster-spreading variant to deal with.

The level of uptake will also be crucial. Surveys suggest as many as one in five may not have the vaccine - although the older, more vulnerable groups tend to be the most willing to be vaccinated.

And the fact that no vaccine is 100% effective means come February there could still be significant numbers of very vulnerable people who are not protected.

Another factor is whether the vaccine stops transmissions - so-called sterilising vaccination.

Trials have shown the vaccines are good at stopping symptoms developing. But that does not mean someone who has received a jab will not pass on the virus.

If it does not, that, of course, has implications on how many control measures have to be kept in place. It will take us at least until spring to know the answer to this.

At this stage, it seems hard to see much beyond the possible reopening of schools come March.

Labour leader Sir Keir Starmer said it was an "impossible question" to ask how long the lockdown would need to last.

Under the national lockdown, people in England must stay at home and only go out for limited reasons.

This includes for food shopping, exercise, or work if they cannot do so from home. Similar measures are in place across much of Scotland, Wales and Northern Ireland.

In Scotland, lockdown has been extended until at least the middle of February, with most school pupils to continue learning from home.

And in Wales health minister Vaughan Gething has said no "significant easing" of Wales' Covid restrictions should be expected when the current guidelines are reviewed this month.

Sir Keir added that the coronavirus vaccines were "really good news" but "should not mask the fact that we have still got a very serious problem".

The government is aiming to offer a vaccine to all over-70s, the extremely clinical vulnerable and health and care workers by mid-February.

Sixty-five new vaccination centres are opening in England, including a mosque in Birmingham and a cinema in Aylesbury.

*  Transport Secretary Grant Shapps has announced that all arrivals from Tanzania and the Democratic Republic of Congo will be banned from the UK from 04:00 GMT on Friday over concerns about the South Africa variant

*  Glastonbury Festival has been cancelled for a second year running 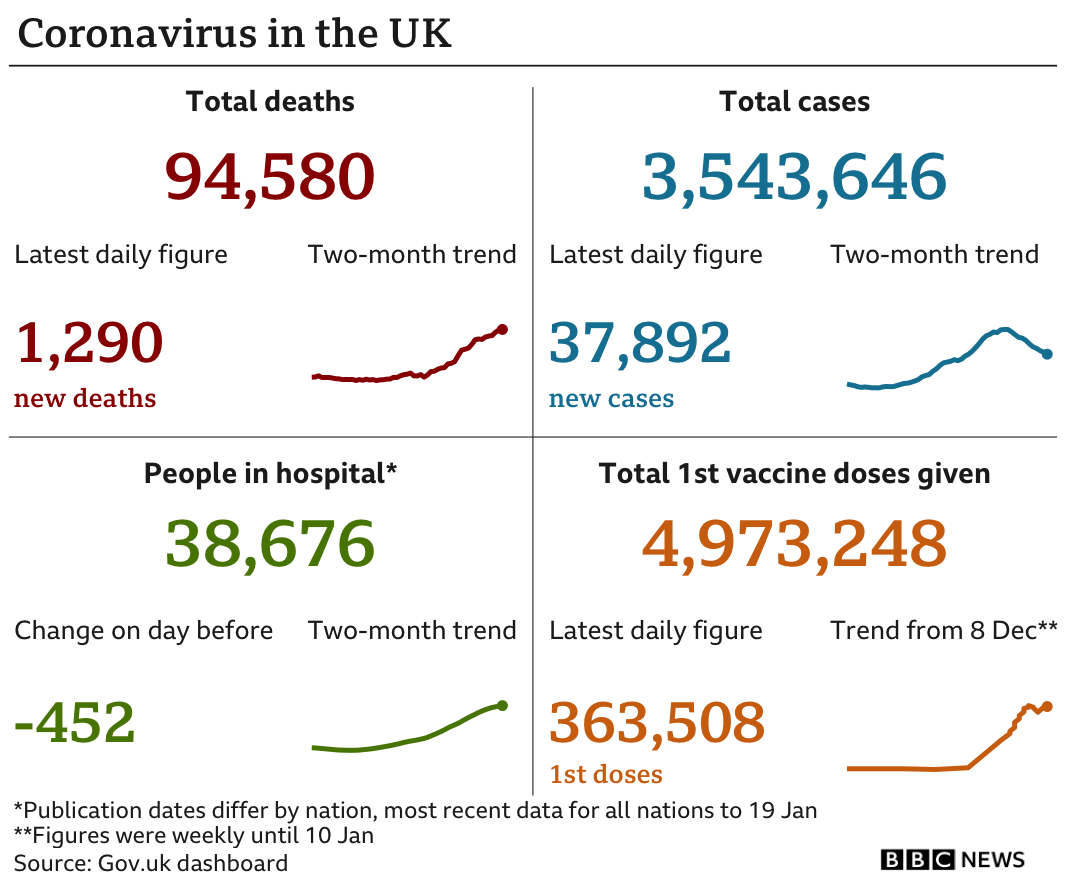