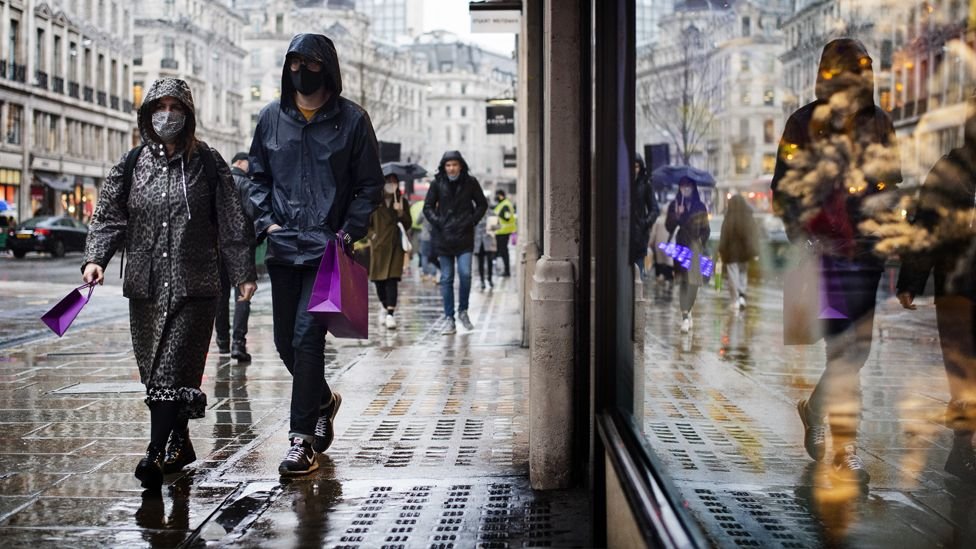 Levels of coronavirus are continuing to rise with one in 85 people in England infected, according to the Office for National Statistics.

London now has the highest percentage of people testing positive - more than 2%.

In Wales, the virus is infecting one in 60 people - a sharp increase. Infection levels are also up in Northern Ireland.

In Scotland, the percentage of people testing positive has decreased, equating to one in 140 people there with the virus, the ONS suggests.

It comes as a total of 521,594 people have been vaccinated against coronavirus in England over the two weeks since roll-out started, with thousands more across the UK nations. People aged 80 and over received 70% of these doses.

According to the ONS figures, there are sharp rises in levels of positive tests in the capital, the east of England, and the South East, where a new variant of the virus is spreading at a dangerous rate, according to government ministers.

About two-thirds of people testing positive in these areas could have the new variant - but this is only an estimate, the ONS says.

Meanwhile, case rates in London have doubled in one week, figures from Public Health England show, to 602 per 100,000 people.

Dr Yvonne Doyle, medical director at PHE, said: "This will not be a normal Christmas for any of us.

"By continuing to reduce your contacts you can help to slow the spread of Covid-19. Remember that about one in three people may never experience any symptoms so could infect others without realising it." 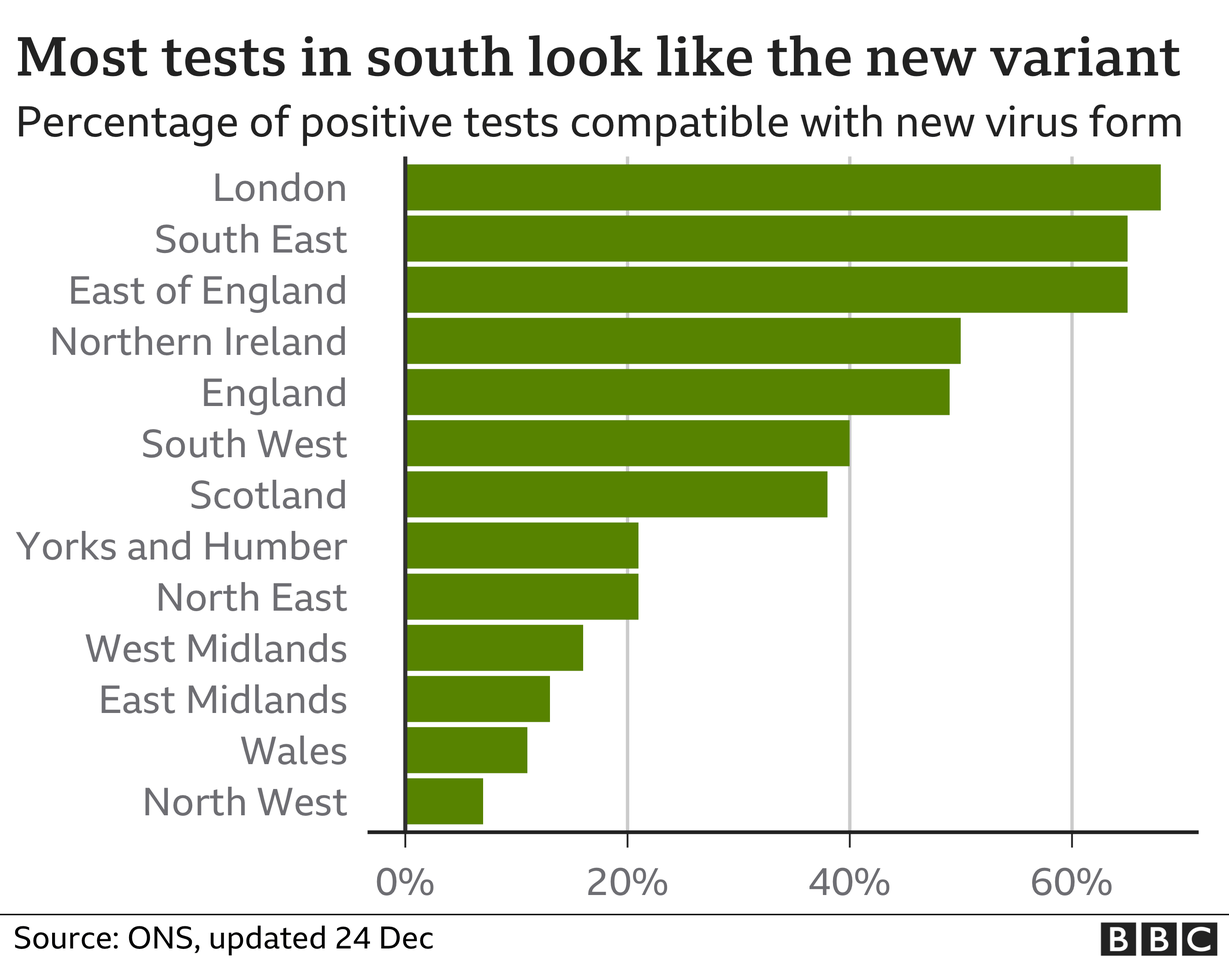 There are two variants causing concern at the moment - the first, which emerged in Kent, is thought to be driving a rapid growth in cases and hospital admissions in the south and east of England in recent weeks.

Scientists advising government are worried the rest of the UK could experience the same thing, as the number of patients in hospital with Covid approaches levels of the spring peak.

This has led to strict rules being imposed on six million more people in England from 26 December when 40% of the country will be living under tier 4 restrictions.

Scientists say the new variant spreads more easily than other forms of the virus although they don't believe it causes more serious disease. 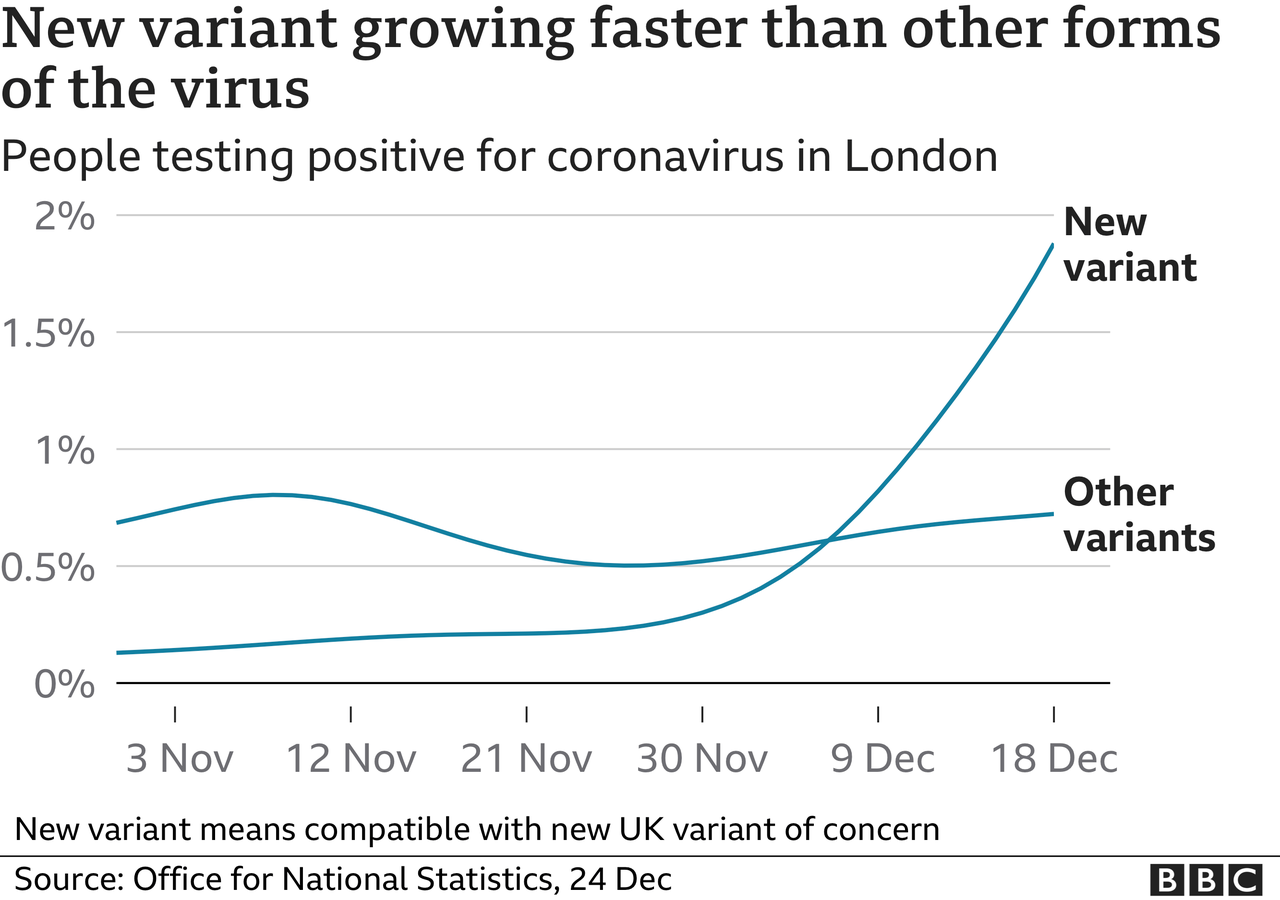 The second variant, which originated in South Africa and is causing a spike in cases there, was detected in two cases in the UK on Tuesday, prompting a ban on travel from the country.

The R, or reproduction number of the virus, is now between 1.1 and 1.3 for the UK, with regions in the south and east of England even higher, signalling that the epidemic is growing fast.

The ONS figures are based on tests of people in thousands of households across the UK whether they have symptoms or not, giving an accurate estimate of how many people are infected with the virus.

Prof Kevin McConway, emeritus professor of applied statistics at The Open University, says the figure of one in 85 people with the virus in England is "worryingly high".

But there is some good news - infection rates in the north of England have been falling in recent weeks.

"I hope that the new virus variant and any extra mixing of people over Christmas does not reverse the positive trends in those parts of the country," Prof McConway says.

Daily UK government figures show there were 39,036 confirmed new cases on Thursday, slightly down from yesterday's record of 39,237. The total number of cases reported in the last week is nearly 50% higher than the week before.

On the same day, the deaths of another 574 people were reported within 28 days of a positive test for Covid-19.

It is almost inevitable that this figure will rise in the coming weeks as small numbers of those infected become seriously ill with the disease.