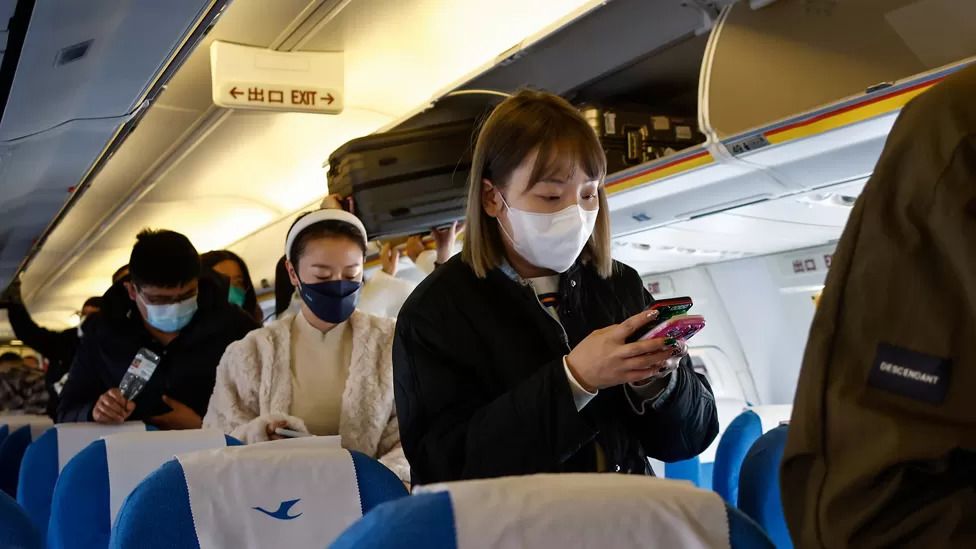 The UK government is reviewing whether to introduce Covid restrictions on visitors from China, the defence secretary has said.

Earlier, an ex-health minister urged the government to consider testing arrivals from China for Covid.

A number of countries are introducing mandatory testing in response to China's coronavirus surge.

Asked whether the government would consider restrictions, Mr Wallace said: "The government is looking at that, it's under review, we noticed obviously what the US has done and India and I think Italy has looked at it."

"We keep under review all the time, obviously, health threats to the UK, wherever they may be."

Several countries - including the US, Japan and Italy - are now enforcing testing on visitors from China.

This follows a surge in cases in China after Beijing's decision to effectively end its zero-Covid policy.

UK Health Minister Will Quince said he knew that many people would be concerned "about the news coming out of China" and the government was taking the situation "incredibly seriously".

However, there was "no evidence at this point of a new variant from China", which he said would be the "key threat".

"At the moment the variant that is in China currently is already prevalent here in the UK."

Meanwhile, the Scottish government said it currently has no plans to change travel requirements, and would continue to work with the UK Health Security Agency and other countries to "monitor the spread of harmful variants".

Lord Bethell, who was health minister during the pandemic, told the BBC there was a good reason to look at testing people when they land, a policy Italy has adopted.

"What the Italians are doing is post-flight surveillance of arrivals in Italy, in order to understand whether there are any emerging variants and to understand the impact of the virus on the Italian health system," he told BBC Radio 4's Today programme.

"That is a sensible thing to do and something the British government should be seriously looking at."

China is reporting about 5,000 cases a day, but analysts say such numbers are vastly undercounted - and the daily caseload may be closer to one million.

Prof Paul Hunter, professor in medicine at the University of East Anglia, said he did not think the current situation in China was likely to generate many more Covid cases in the UK or generally across the globe.

While China was in a "dark" and "difficult" place, the current evidence suggested the particular variant causing most infections in the country was "very common elsewhere in the world", he told BBC Radio 4's PM programme on Wednesday. The UK has seen many such cases since it appeared in the summer, he added.

On Wednesday, the US said a lack of "adequate and transparent" Covid data in China had contributed to the decision to require Covid tests from 5 January for travellers entering the country from China, Hong Kong and Macau.

Others have also announced restrictions:

*  In Japan, from Friday, travellers from China will be tested for Covid on arrival. Those who test positive will have to quarantine for up to seven days

*  In India, people travelling from China and four other Asian countries must produce a negative Covid test before arriving. Positive passengers will also be put in quarantine

*  Taiwan says people arriving on flights from China, as well as by boat at two islands, will have to take Covid tests on arrival throughout January. Those who test positive can isolate at home

*  Malaysia has put additional tracking and surveillance measures in place

On Thursday, Italy urged the rest of the EU to follow its lead and ensure Chinese arrivals were tested. However, the EU's disease agency said the surge in cases in China was not expected to impact members states and said screening travellers from China for Covid would be "unjustified".

Beijing's foreign ministry has said coronavirus rules should only be put in place on a "scientific" basis and accused Western countries and media of "hyping up" the situation.

China only announced on Monday its decision to end quarantine for arrivals - effectively reopening travel in and out of the country for the first time since March 2020.