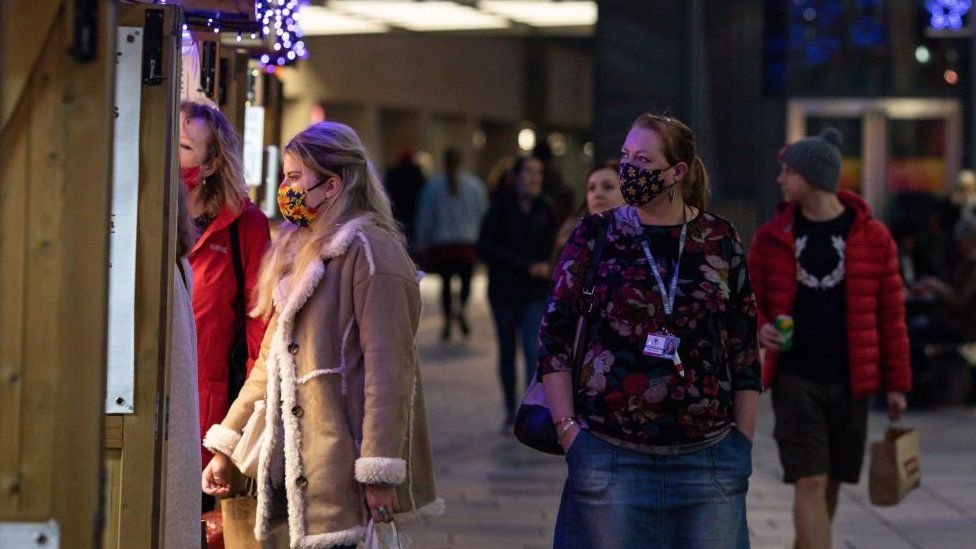 The number of people in Wales dying with Covid-19 is above the worst case scenario, Welsh Government advisers have said.

The Swansea University projection has been exceeded in recent weeks, the Technical Advisory Group said.

It comes as ministers are considering whether new restrictions will be needed after Christmas to tackle rising cases.

However the Welsh Government has been accused of losing control and lacking a strategy by opposition parties.

Wales, which had a 17-day firebreak lockdown in October and November, saw its case rate overtake England's on 23 November.

A controversial ban on alcohol sale in pubs and restaurants was brought in last Friday.

A report from TAG, the Welsh Government's scientific advisory body, said: "Wales has seen a greater increase in confirmed cases and mobility since the firebreak which suggests that hospital admissions and deaths may increase in the next 2-3 weeks depending on the age structure of cases."

It added: "Deaths are currently as high as May, with the excess death rate in Wales higher than in England and Scotland over recent weeks, and tracking above our reasonable worst case."

It is not clear what period of time the report, dated 2 December, is referring to.

Prior to the firebreak, it was projected under Swansea University's reasonable worse case scenario model that 6,000 people could die by March, but a new model had been commissioned which has not yet been published.

There were 218 deaths with Covid-19 in the latest weekly figures from the Office for National Statistics (ONS) - bringing the number of deaths in Wales to a total of 3,767.

On Monday Health Minister Vaughan Gething had said Wales was the only part of the UK not seeing falling cases at the end of November. 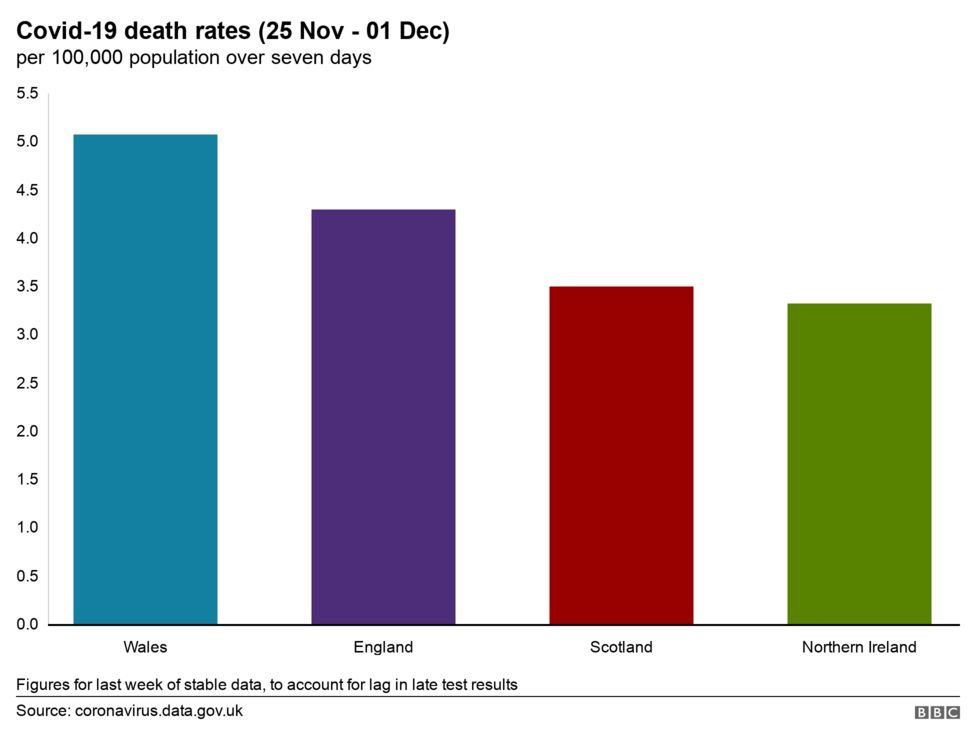 'A sting in the tail'

Latest figures from NHS Wales showed there were 82 people were being treated on invasive ventilated beds, including in critical care, for confirmed or suspected coronavirus on Monday - the highest since early May.

"The problem is there is a sting in the tail. It takes a good 10 days, of someone catching Covid, getting poorly and needing hospital.

"So I see the numbers every day pop up on how many new tests there are, and I think 'God, in 10 days time that is going to hit us', and you know we are going to be in a position of speaking to a family over the phone and telling them: 'I'm really sorry I don't know if I can get your loved one through this'." 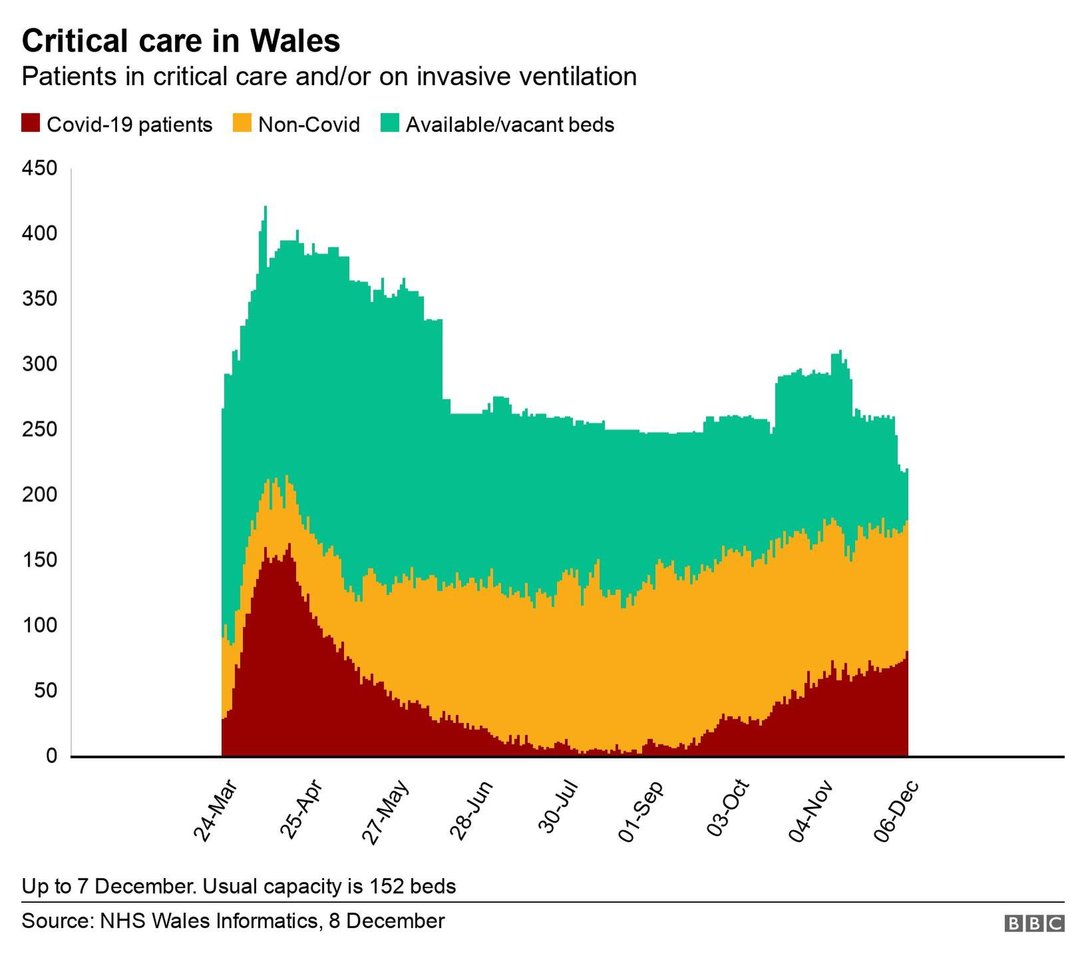 Of those in critical care with Covid, 22 were in Cwm Taf Morgannwg, 21 were in Swansea Bay, 12 in Aneurin Bevan, 11 in Cardiff and Vale, nine in Betsi Cadwaladr and seven in Hywel Dda.

The figures also show there were 30 more patients in critical care than the usual capacity.

Overall, there are 1,810 Covid patients in hospital, including record numbers recovering from the effects of the virus.

Patient numbers have risen in all areas apart from Cwm Taf Morgannwg. Aneurin Bevan has the most Covid patients, 542, 14% more than a week ago.

Meanwhile the chair of the Welsh Government's Covid-19 vaccine programme board said she was "very definitely" concerned there could be a third wave of the virus.

"As we see cases rise, we know that the next thing that will happen will be hospital admissions and then ITU admissions and, of course, very sadly, deaths.

"So it is an appeal that while the vaccine is incredibly good news, we need to keep adhering to social distancing - hands, face, space." 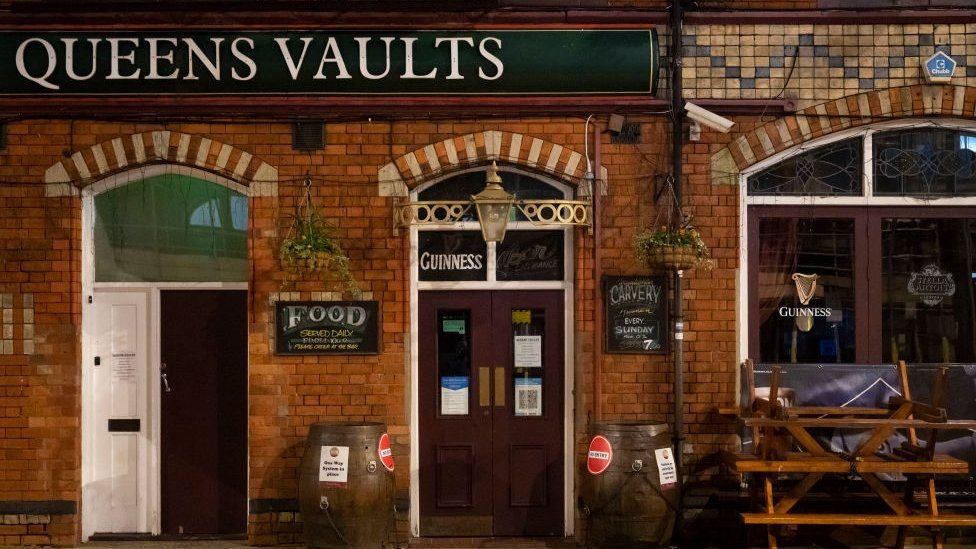 Pubs have been stopped from selling alcohol in Wales

In the Senedd on Tuesday Mark Drakeford said the changes made last Friday needed to be given an "opportunity to make a difference".

"We need them to be accompanied by actions that people can take in their own lives to assist communities right across Wales to get this virus back - the numbers falling once again.

"I don't think that means that we will be taking further measures this side of Christmas", he said.

But, referring to the TAG report, Mr Drakeford said it was clear that the "period of relaxation over Christmas will lead to a further rise" in cases.

'Not able to disturb Christmas agreement'

Speaking to the Today Programme on BBC Radio 4, Mr Gething said: "Despite all the messaging and encouragement for more people to do the right thing, we haven't seen the significant and sustained change in our pattern of behaviour."

He said it was "possible" but unlikely that the relaxation of Covid restrictions over Christmas could be changed.

Three households are being allowed to socialise indoors as a bubble between 23 and 27 December in a set of rules agreed by all four UK nations.

"I don't think we're going to be able to disturb the Christmas settlement," Mr Gething said.

But Mr Gething suggested that, after Christmas, new restrictions could be on the way, saying: "We have difficult choices to make over the next few days about what we are going to need to do after the Christmas period." 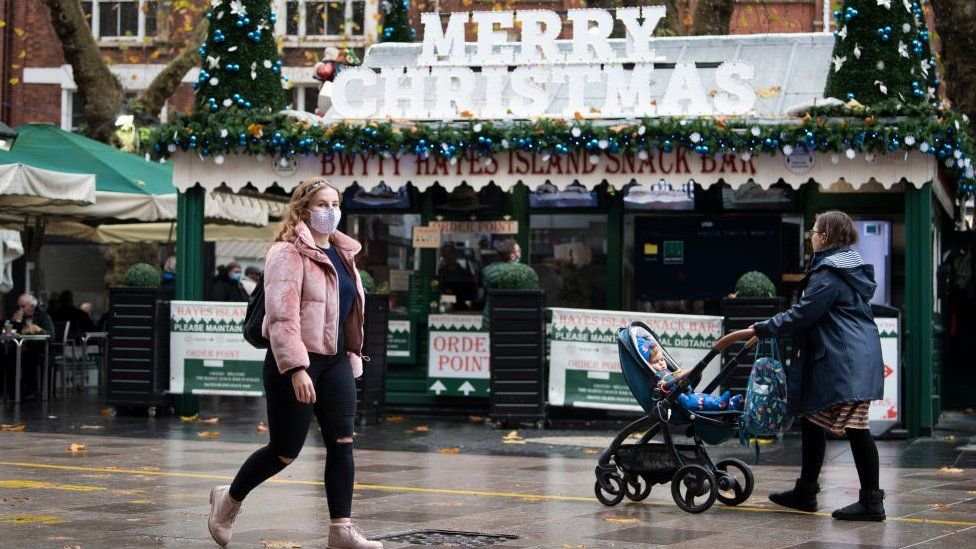 What have the opposition said?

"If they had followed the Welsh Conservative plan for controlling the virus prior to the firebreak, Wales would be in a better place with fewer deaths and lower infection rates.

"It's now high time that the first minister appointed a vaccination minister to offer relief to his embattled health minister."

Plaid Cymru health spokesman Rhun ap Iorwerth said: "We clearly face a perilous situation in Wales, and it's quite apparent that the November firebreak ended too abruptly.

"I don't see a strategy at the moment. Government communication and messaging needs to be stepped up, but vitally so must support for people to be able to isolate when they've come into contact with a positive case. Simply blaming public behaviour gets us nowhere."