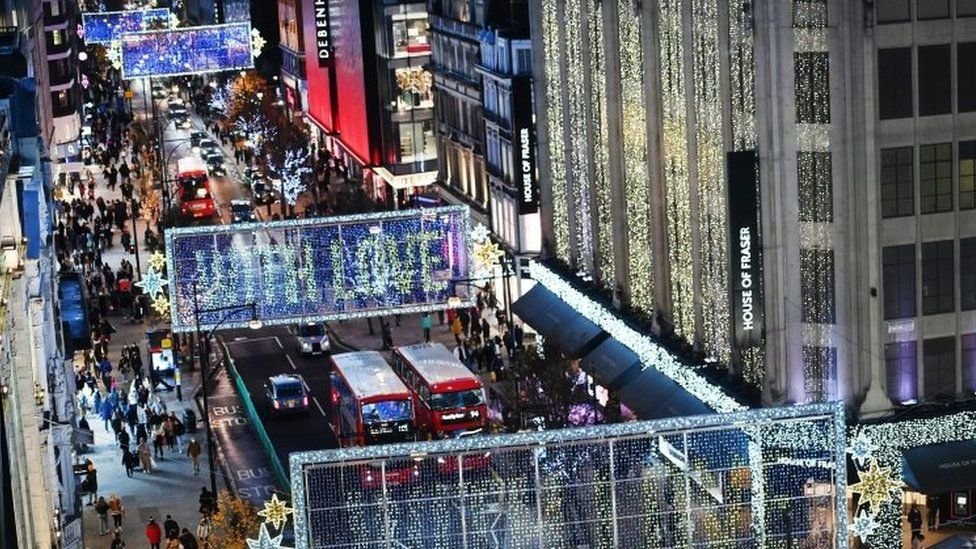 Advice around celebrating Christmas safely across the UK is expected to be significantly strengthened in the coming days, the BBC has been told.

People are likely to be urged to think carefully about travelling and to stay local where possible.

However, it is unlikely the agreed rules - allowing up to three households to mix for five days - will change.

Officials from all four nations held talks on Tuesday - and more are scheduled to take place on Wednesday.

It comes amid concern that relaxing the restrictions will fuel a further surge in Covid-19 case numbers.

A source said no final decisions had been taken but people are likely to be told that the relaxations are limits not targets and that they should be cautious when forming household bubbles.

It is still hoped a common approach can be agreed across the four nations.

Under the agreed Christmas rules, travel restrictions will be eased from 23 to 27 December to allow up to three households to form a bubble and stay overnight at each other's homes.

A spokeswoman for Northern Ireland's government said scientific advisers would be consulted ahead of any decision, while a Welsh government spokesman said talks on Wednesday would "confirm the position".

Ahead of the talks, Scotland's First Minister Nicola Sturgeon argued there was a "case" for tightening the planned freedoms to combat a rise in infections and indicated she could break with the four-nations approach.

Meanwhile, another 18,450 cases and 506 deaths within 28 days of a positive test were reported in the UK on Tuesday, government figures showed.

The four nations have been taking very different approaches to restrictions in the last few months, so agreeing a common approach to Christmas was no small ask.

But there are big questions now about what changes should be made given the rising number of Covid cases in many areas.

I understand there are no plans to make changes to the restrictions in England; meaning it's unlikely the legal rules will change.

However, we can expect firmer guidance in the next few days. One source on the call with the four nations told me there was an acceptance tougher messaging was needed.

There has been discussion about travel. Some are particularly worried about people moving from areas where the virus is spreading fast, to areas where it's fairly rare, and taking the virus with them. The new guidance could cover that - as well as reminding people the rules are a maximum, not a target.

It's not impossible that different parts of the UK will take different decisions. But there is still hope they can agree when talks reconvene on Wednesday morning.

Labour leader Sir Keir Starmer has called on ministers to hold an emergency review of the plans.

Earlier, No 10 said the rules were "under constant review" but it still intended to allow families to meet up.

The prime minister's spokesman said the government had been clear that people needed to "remain cautious and vigilant" during the five days of relaxed rules.

According to a YouGov poll, a majority of people (57%) in Great Britain believe the relaxation of coronavirus restrictions over Christmas should be scrapped.

Some 31% said the easing should go ahead as planned, while 12% said they were unsure.

In a joint editorial criticising the UK's Christmas rules, the editors of British Medical Journal and Health Service Journal wrote that the government was "about to blunder into another major error that will cost many lives".

They stressed that demand on the NHS was increasing, and added that a new strain of coronavirus "has introduced further potential jeopardy".

If the UK's Christmas plans are not changed, BMJ editor in chief Fiona Godlee said hospitals could become overwhelmed with a surge in Covid patients.

She told BBC News: "On the current trend, if nothing is done, by New Year's Day there will be as many people in hospital with Covid-19 as there were at the peak of the first phase in April.

"That's even without the Christmas relaxation - so if you add that on top, and then on top of that the winter pressures that we always see in the NHS at winter, you will see a worrying scenario of people not being able to get the care they need."

She also said England's tiered system was "not succeeding in what it set out to do", as case numbers have continued to increase in some areas in the top tiers.

A review of which areas of England are in which tier is scheduled to take place on Wednesday.

It has already been announced that some 10.8 million people across London, Essex and Hertfordshire will join tier three from 00:01 GMT on Wednesday, bringing the total number of people living under the toughest restrictions to 34 million people - or 61% of England's population.

Under tier three - very high alert - rules, pubs and restaurants must close, except for takeaway and delivery, and indoor entertainment venues such as theatres, bowling alleys and cinemas must remain shut.