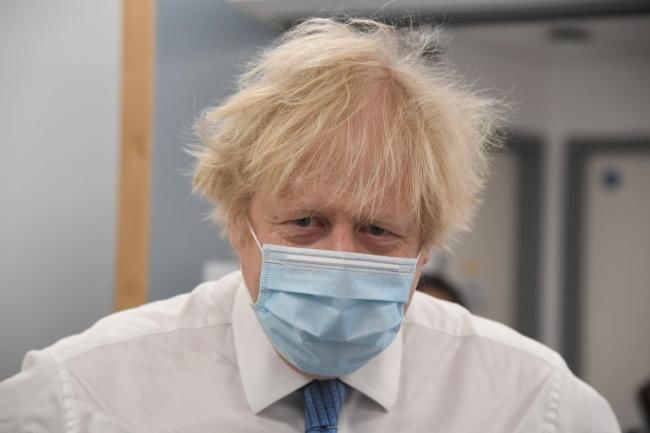 Covid: Boris Johnson to focus on 'data, not dates' for lockdown easing

Boris Johnson says it is "absolutely right" to take a "data not dates" approach to leaving lockdown, stressing England will ease measures "cautiously".

The prime minister said he would set out "what we can" in a road map for easing restrictions on Monday.

"We want to be going one way from now on, based on the incredible vaccination rollout," he said.

It follows a call from scientists for a data-led approach to lifting measures.

Speaking at a mass vaccination centre in Cwmbran, south Wales, Mr Johnson said relaxation of measures would be done in "stages" and that the reopening of hospitality was one of the last things to return after the first lockdown.

"You have to remember from last year that we opened up hospitality fully as one of the last things that we did because there is obviously an extra risk of transmission from hospitality," he said.

Asked whether he agreed with a data-led approach, Mr Johnson said "I do think that's absolutely right" and said the relaxation of measures will be "based firmly on a cautious and prudent approach", in such a way as to be "irreversible".

Official figures show the UK has recorded a further 12,718 Covid cases and another 738 deaths within 28 days of a positive test. Last Wednesday, 13,013 cases and 1,001 deaths were reported. 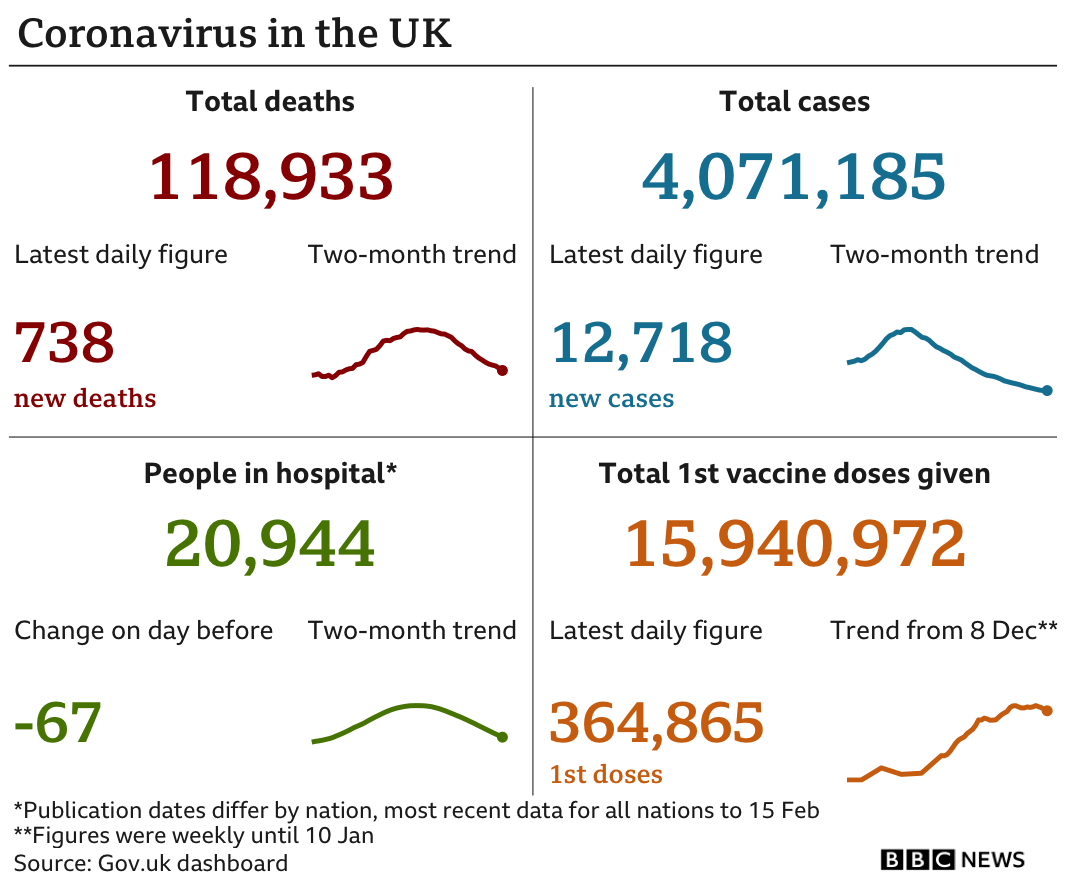 At the weekend ministers were hopeful that schools could reopen from 8 March, with non-essential shops to follow and later pubs and restaurants.

Shadow health secretary Jonathan Ashworth said he expected "gradual easing" to be the approach from when restrictions were reviewed but the government needed to "do more to stop the spread".

"We have to be driven by the data, but we have to be cautious because this has got to be the final lockdown," he said.

Prof Dame Angela McLean, deputy chief scientific adviser, earlier told the Commons Science and Technology Committee that each step of easing measures should be "irrevocable", adding "that means we have to be extremely careful, before we add another unlocking".

"We want to understand the impact on each step before taking the next steps," she said, adding that required a "large gap" after children go back to school.

Prof Mark Woolhouse, an expert in infectious diseases from Edinburgh University who advises the government, said it was right to be cautious.

But he said it must also be recognised the falling rates of infection seen during lockdown were more encouraging than many thought they would be.

He said schools were not a "significant driver of infection" and there had never been a surge in cases seen across western Europe after reopening schools - although the new UK variant, which is more contagious, needed to be considered.

On Tuesday, Scotland First Minister Nicola Sturgeon announced the phased return of primary school pupils from Monday, while in Wales pupils aged three to seven will return to school after half-term. They remain closed to most pupils in Northern Ireland.

Infection rates are coming down - more quickly than many thought they would given the new more contagious UK variant.

The vaccination programme is also going well, providing protection to the most vulnerable. And the arrival of spring should be expected to help keep rates low.

So why the caution? While most believe Covid will become seasonal, a bounce-back in the summer is not being ruled out.

And even if rates rebound only a little, there are still large numbers of vulnerable people. Nearly half of hospitalisations have been in the under-70s.

What is more, high levels of infection at a time when vaccines are being rolled out and immunity being built provides the perfect breeding ground for new variants. Mutation may be unavoidable in the long-term, but encouraging them at this point would, many experts believe, be foolish.

It means the government is likely to be more cautious than some would want - and indeed maybe need to be given the cost of lockdown. But the judgement being made is it's better to go slowly and surely rather than having to take any more steps back.

Also speaking at the committee earlier was Prof Sir John Bell, Oxford University's regius professor of medicine, who said it was "not plausible" to expect people to comply with major curbs after they have received two doses of vaccine.

"It's better to plan for that than to assume you can hold back the water with a dam, because you won't be able to," he said.

The committee heard that ministers may need to consider what society sees is an "acceptable" level of Covid infection and deaths as restrictions are eased.

Asked about this on BBC Radio 4's World At One programme, Prof Peter Openshaw, from the government respiratory virus threats advisory group Nervtag, said some "hard-nosed... calculations are going to be done".

NHS Providers, which represents health managers, has suggested the number of new daily cases should be below 1,000 before restrictions are lifted.

Chris Hopson, chief executive of NHS Providers, said the end of April, once the top nine priority groups have been vaccinated, was the "logical point at which we can start considering easing restrictions".

Meanwhile, healthy volunteers will be infected with coronavirus to test vaccines and treatments in the world's first "human challenge" study which will take place in the UK.